The implications of technology’s impact and reach were the subject of a broad conversation between Microsoft President Brad Smith and “The Daily Show” host Trevor Noah, who spoke before a capacity crowd Sept. 27 in Princeton’s Richardson Auditorium.

“Brad and Trevor, who have been working together since 2016, have a shared interest in how technology is changing the world and what it means for the future of our society,” said Princeton President Christopher L. Eisgruber in his introduction. “We are fortunate to have them with us to discuss the role of technology in their lives, their work and their friendship, and explore the connections between tech and a range of today’s most complex issues including populism, income inequality and immigration.” 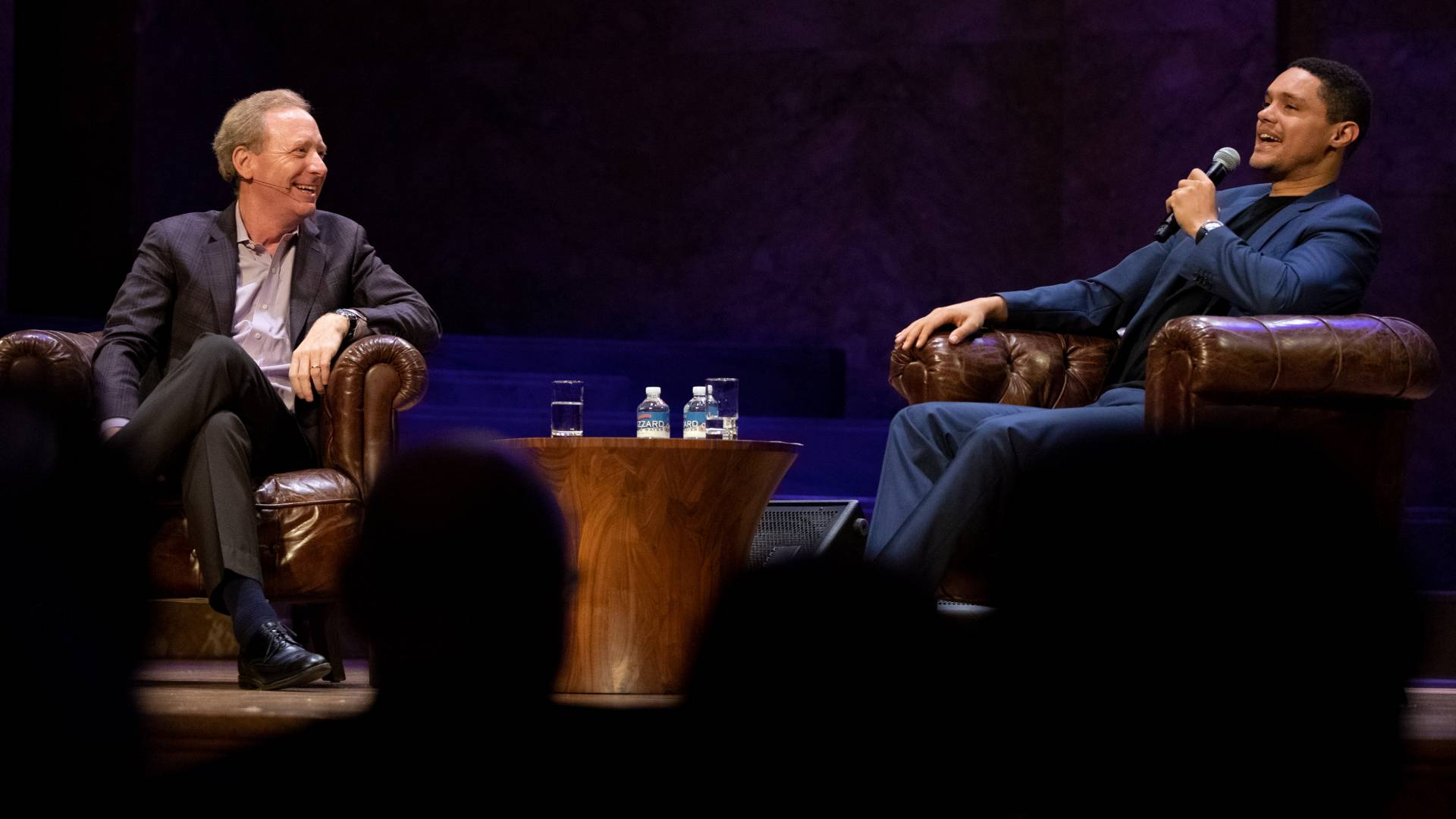 Microsoft President Brad Smith, left, and "The Daily Show" host Trevor Noah interviewed one another and answered audience questions in a broad discussion of technology and its role in society held Sept. 27 in Richardson Auditorium.

Smith and Noah’s talk, titled “The Future of Technology and the Tale of Two Books,” connected their perspectives on the role of technology as formed through their individual life experiences.

Smith, a University trustee and a member of the Class of 1981, recently published “Tools and Weapons: The Promise and the Peril of the Digital Age,” which he co-wrote with Carol Ann Browne, Microsoft’s senior director of communications and external relations. The book, published in September, offers a recent history of technology in society, and it explores Microsoft’s role in worldwide regulatory changes and litigation to frame emerging issues in privacy, cybercrime and inequality, among others.

In 2016, Noah wrote a memoir, “Born a Crime: Stories from a South African Childhood,” in which he details his early life, born under apartheid as the son of a white Swiss father and black Xhosa mother at a time when their union was a punishable offense.

Smith and Noah were met with enthusiastic cheers from students, faculty and staff members in attendance before engaging in a wide-ranging, and often humorous conversation that reflected their camaraderie and shared interests.

The two first met after the publication of Noah’s memoir, when Noah visited Redmond, Washington, to deliver a talk to Microsoft employees. He and Smith quickly discovered their mutual interest in technology and its role in society.

Since “Tools and Weapons” was released in early September, Smith has appeared on “The Daily Show,” and he also appeared with Noah for a discussion at The New School as part of his official book tour.

A common area of concern for Smith and Noah is addressing the digital divide, where they both have centered their philanthropic efforts. Noah accompanied Smith in 2018 to the Young Women’s Leadership School of Brooklyn in New York City, where students are learning computer science through Microsoft’s Technology Education and Literacy in the Schools (TEALS) program.

“When you think about the impact of technology in the world today, I think there’s a couple of digital divides and one of them is around skills,” Smith said. “Because there are so many jobs for the future that do require that people know how to code or know something about data.”

Smith also discussed the lack of broadband in rural communities — to which he devotes a chapter in his book — which he says is inhibiting economic growth and contributing to a variety of ills in those areas, including high unemployment rates. “If you think about it, you start to appreciate that broadband is sort of the electricity of the 21st century,” he said. 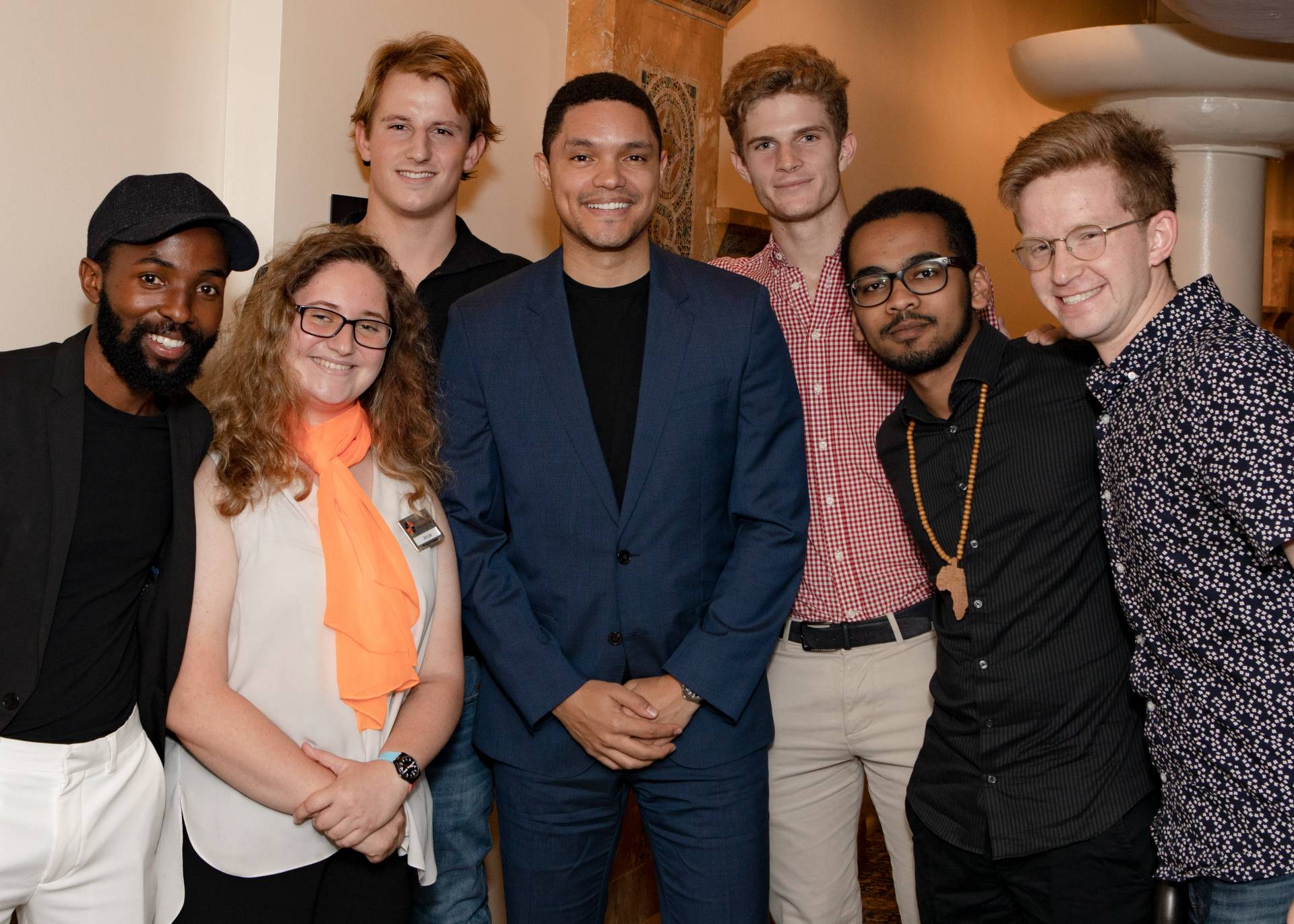 Noah poses backstage with a group of Princeton students, including some from his homeland of South Africa.

Noah talked about growing up in apartheid and post-apartheid South Africa, his mother’s interest in computers, and her encouragement of him at an early age to develop an aptitude for technology. He said he built his own computers and explained that his early exposure to the internet, chat groups and social media “defined not just how I think, but how I exist in the world.” When Noah was ready to launch his Trevor Noah Foundation in Johannesburg, to offer orphan and underprivileged children the same opportunities his mother created for him, he went to Smith for advice.

“I wanted to give that access to other children,” he said. “I think we live in a world now that if you don’t know how to use a computer, you’re basically being doomed to a life of poverty.”

The conversation was punctuated with lighter moments and a few Princeton references. Smith said he arrived at the University a few years before computers came into use and recounted how he typed out handwritten senior thesis pages for his then-girlfriend and now wife of 36 years, Kathryn Surace-Smith, Class of 1981.

As for the future of technology, both men said education can and should play an important role in shaping its development. Noah asked Smith, who concentrated in the Woodrow Wilson School of Public and International Affairs and was trained as a lawyer, what it was like to be the only person in the room at times at Microsoft without a background in computer science or engineering.

“If you want to think about how technology meets society, it is great to have a background in computer science or engineering or data science, but it’s actually now, it’s about how all these disciplines come together,” Smith said. 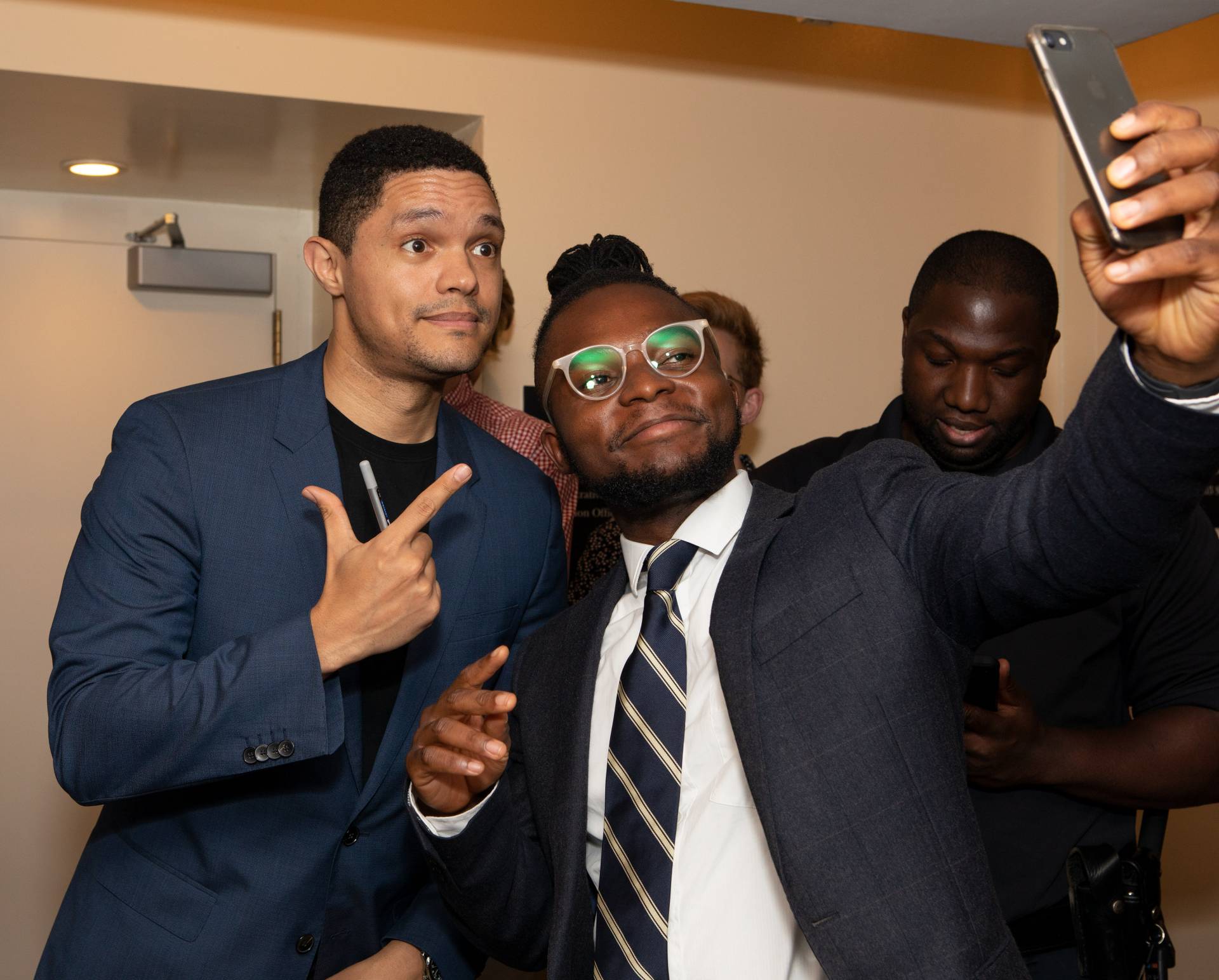 Noah takes a selfie with Princeton alumnus and University Trustee Achille Tenkiang, Class of 2017. Noah spoke about how exposure to the internet, chat and social media “defined not just how I think, but how I exist in the world.”

In the case of artificial intelligence, for instance, Smith said programmers are giving machines the ability to make decisions that always have been made by people. “You have to decide how do you want these machines to make decisions,” he said. “You want them to be imbued with the best of the humanities, the social sciences, and I think that’s where the future of computing is going. It’s going in a direction that’s much more multidisciplinary.”

In 2018, Smith gave a talk at Princeton in the G.S. Beckwith Gilbert ’63 Lectures series about the benefits and perils of artificial intelligence.