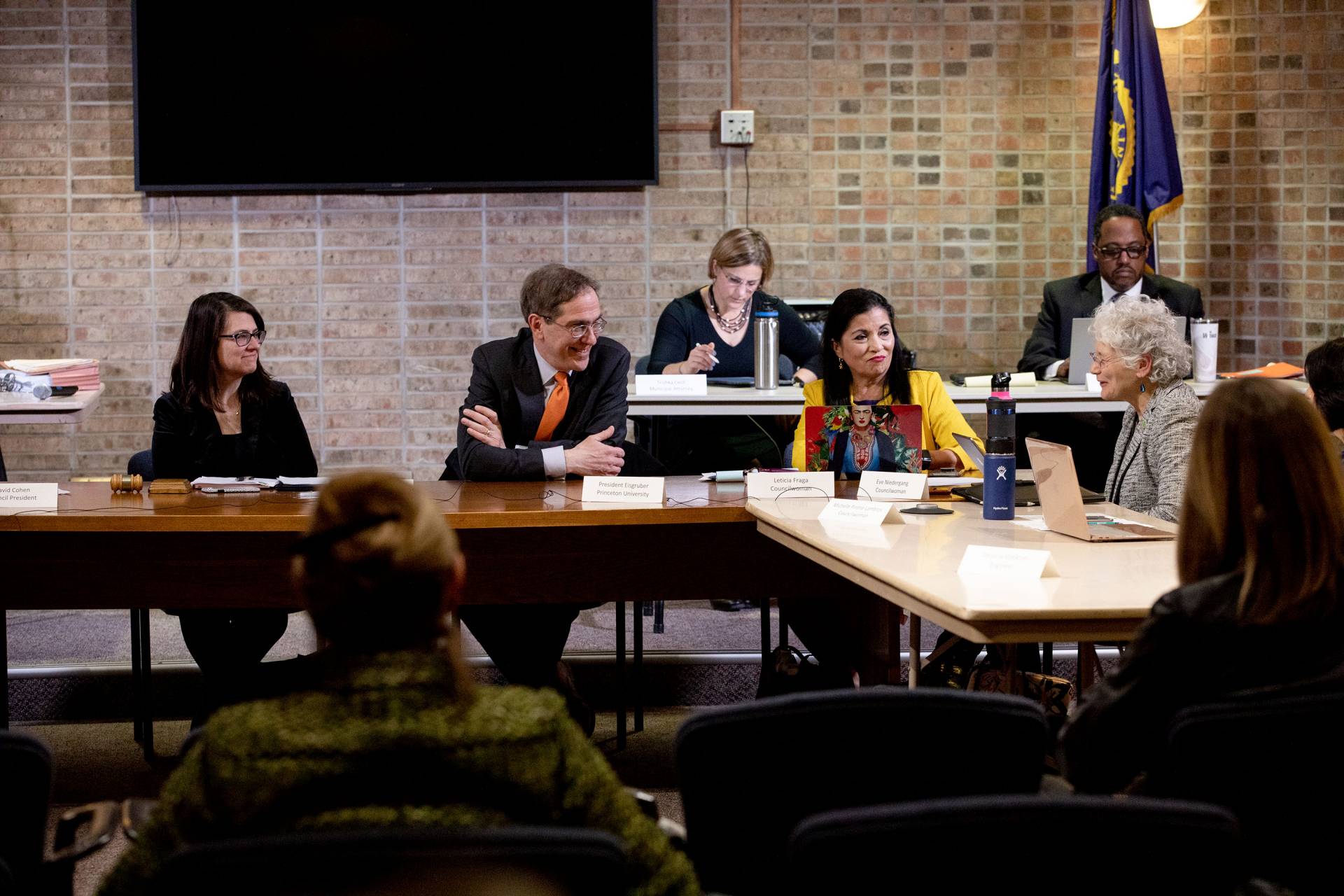 Princeton University President Christopher L. Eisgruber, second from left, met with the Princeton Mayor Liz Lempert, far left, and Council on Feb. 24 for an annual meeting to discuss shared interests between the University and town. This year’s discussion focused on equity and diversity, immigration, sustainability and growth, among other topics. Also pictured in conversation with Eisgruber are councilmembers Leticia Fraga, second from right, and Eve Niedergang, far right.

Princeton University President Christopher L. Eisgruber joined Princeton municipal officials Monday, Feb. 24, to discuss a range of mutual interests that will impact the University and the community in the coming years, including equity and diversity, immigration, sustainability and growth.

In advance of the meeting, the University prepared a summary of various contributions to and partnerships with the town in 2019, including: the $3.35 million voluntary contribution to the municipality; $9.3 million in property taxes (making the University the largest property taxpayer in Princeton); $500,000 toward the purchase of fire-fighting apparatus; University staff volunteering with the Princeton Fire Department during their daytime work hours; support for the restoration of the town’s All Wars Memorial; and countless student volunteer initiatives within the community.

Lempert, who will be leaving office at the end of her current term, said the council appreciated the tradition of its annual conversation with Eisgruber.

Eisgruber thanked Lempert for opening channels of communication with the University and for helping to foster discussions during her time as mayor.

He gave brief remarks centered around themes from his recent State of the University letter, citing the influential legacy of Oswald Veblen, a Princeton mathematician, who played a critical role in rescuing Jewish scholars from persecution in Europe and who led the design of the University’s first Fine Hall, which brought together scholars in mathematics and physics who previously had no such facility where they could share ideas and fellowship.

“I was particularly interested in some of the ways that he showed leadership back in the late [19]20s and early ’30s that speak to issues we are jointly concerned about today,” Eisgruber said, noting how Veblen’s efforts brought refugees including Albert Einstein and Thomas Mann to Princeton. “I think it helped start us on this trajectory, of sorts, of commitments that I think we share around this table.”

Eisgruber commended Lempert and the council on their efforts to set a tone of inclusivity for the town that is welcoming to immigrants and “creates an atmosphere for people of all backgrounds to thrive and flourish.”

The University, he said, will continue its efforts to fight for protections for those impacted by the federal government’s decision to end the Deferred Action for Childhood Arrivals program, in addition to other legislative protections.

“I truly appreciate that we share the same values, and that the University is very vocal about standing up for that and defending our values,” said Councilmember Leticia Fraga.

Councilmember David Cohen thanked Eisgruber for the University’s “aggressive policies for making the campus ready for the future and sustainable.” Cohen also sought the University’s participation in implementing the Princeton Climate Action Plan, which was adopted by the council in 2019.

Councilmember Eve Niedergang said climate issues related to carbon output, but even more critically for Princeton, those related to flooding, are going to be key for the community to address in the coming years. She was particularly concerned about stormwater management and asked Eisgruber about the University’s commitment to managing runoff, especially given new construction that will take place as part of the University’s Campus Plan.

“I think it’s the responsibility of communities like this one — by which I mean the town and University together — to really model some of the things that can be done to create a sustainable future where all of us can thrive,” Eisgruber said. “It is clear that we need to find ways to be able to do the things we do in a more sustainable fashion with a smaller carbon footprint. And it’s equally clear to me that on all the kinds of topics, from stormwater management to the sustainability of our heating systems to transportation, we need to be working together around that in order to make progress.”

As the campus grows, workforce housing also is likely to be a concern, said Councilmember Michelle Pirone Lambros. Eisgruber said the planned expansion of graduate student housing will be particularly beneficial from the municipality’s standpoint, given that it will provide housing that is affordable and proximate to the campus for students.

Councilmember Dwaine Williamson expressed concerns about the pressures on the historic African American population in Princeton due primarily to affordability.

Eisgruber agreed that community issues including diversity and affordability would be areas for possible exploration by faculty, as well as by students, who already have worked and conducted research in Princeton as a part of the University’s community-based learning initiatives.

“It’s very important to me that this town remains diverse and continues to have a strong African American community along with a broad range of other communities, and that we all feel strength in the variety of people that surround us,” Eisgruber said.

Lempert said she sensed a feeling on both the part of the town and the University that they’ve arrived at inflection point on a number of issues. “Thinking about the next 50 years, there are going to be a lot of changes, both on campus and in the community, that are going to have a big impact,” she said. “It’s an exciting time, it’s an important time, and I think we all feel that weight on our shoulders that we want to get it right.”

Eisgruber, Princeton officials underscore the mutual benefits of partnership during the pandemic