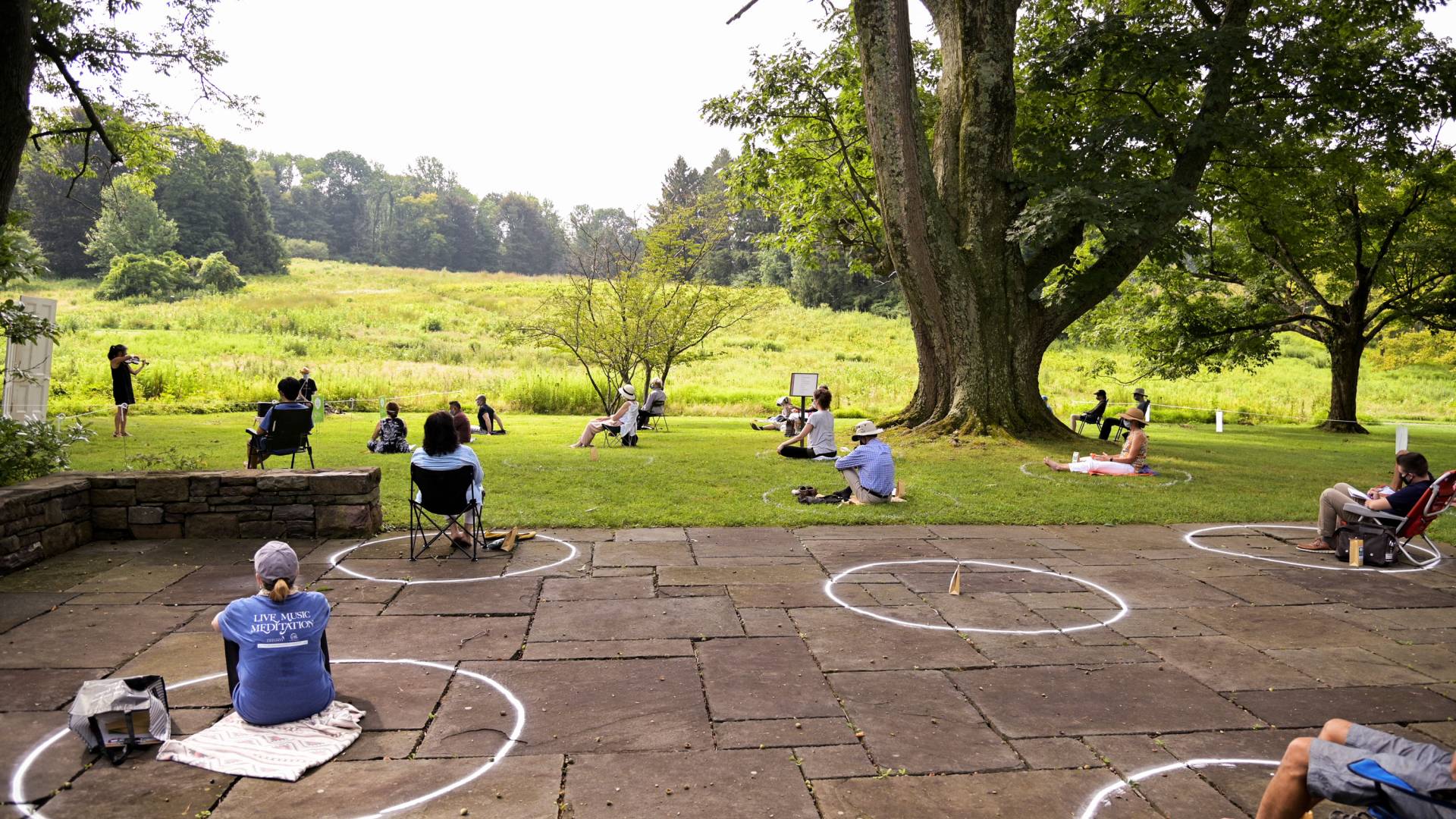 Princeton University Concerts held its "Breathe in Music" series outdoors in 2021, inviting the community to experience live performances by the next generation of classical music stars while following a meditation led by Matthew Weiner, associate dean in the Office of Religious Life. The series is among the many ways in which Princeton University contributes to the Municipality of Princeton and surrounding communities.

Princeton University President Christopher L. Eisgruber joined Princeton municipal officials on Monday, March 14, to discuss shared interests affecting the University and the community, highlighting their mutual support during the past two years of the COVID-19 pandemic and looking ahead to continued partnership, particularly as it relates to the downtown. 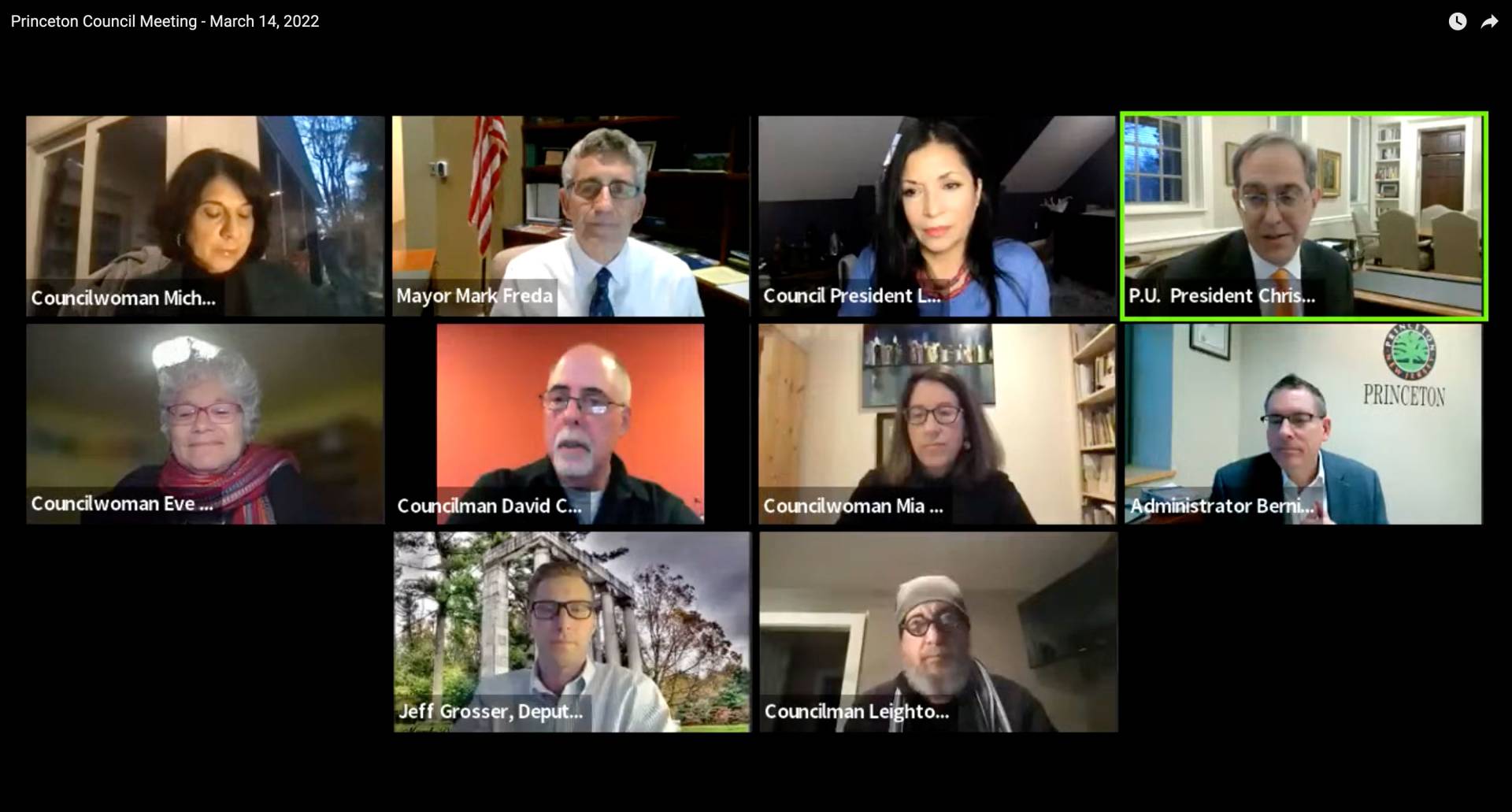 The annual town-gown meeting was held on Zoom, bringing together Eisgruber with Princeton Mayor Mark Freda and Princeton Council members.

“I want to start off, first of all, by thanking you not only for having me on at your meeting, but also for the tremendous partnership that this town has provided to us over these last two difficult years,” Eisgruber said. “It has been a time when it’s really mattered to have the University working in concert with the town.”

Freda said the University was instrumental in working behind the scenes during the pandemic, particularly in coordinating with county and state officials on the vaccine rollout. “A lot of that doesn’t make the press, but it definitely needs to be acknowledged,” Freda said.

Princeton University held 51 vaccine clinics open to the public at Jadwin Gym and administered 16,673 vaccine doses in coordination with the Princeton Board of Health — among its many contributions to the Municipality of Princeton in 2021. 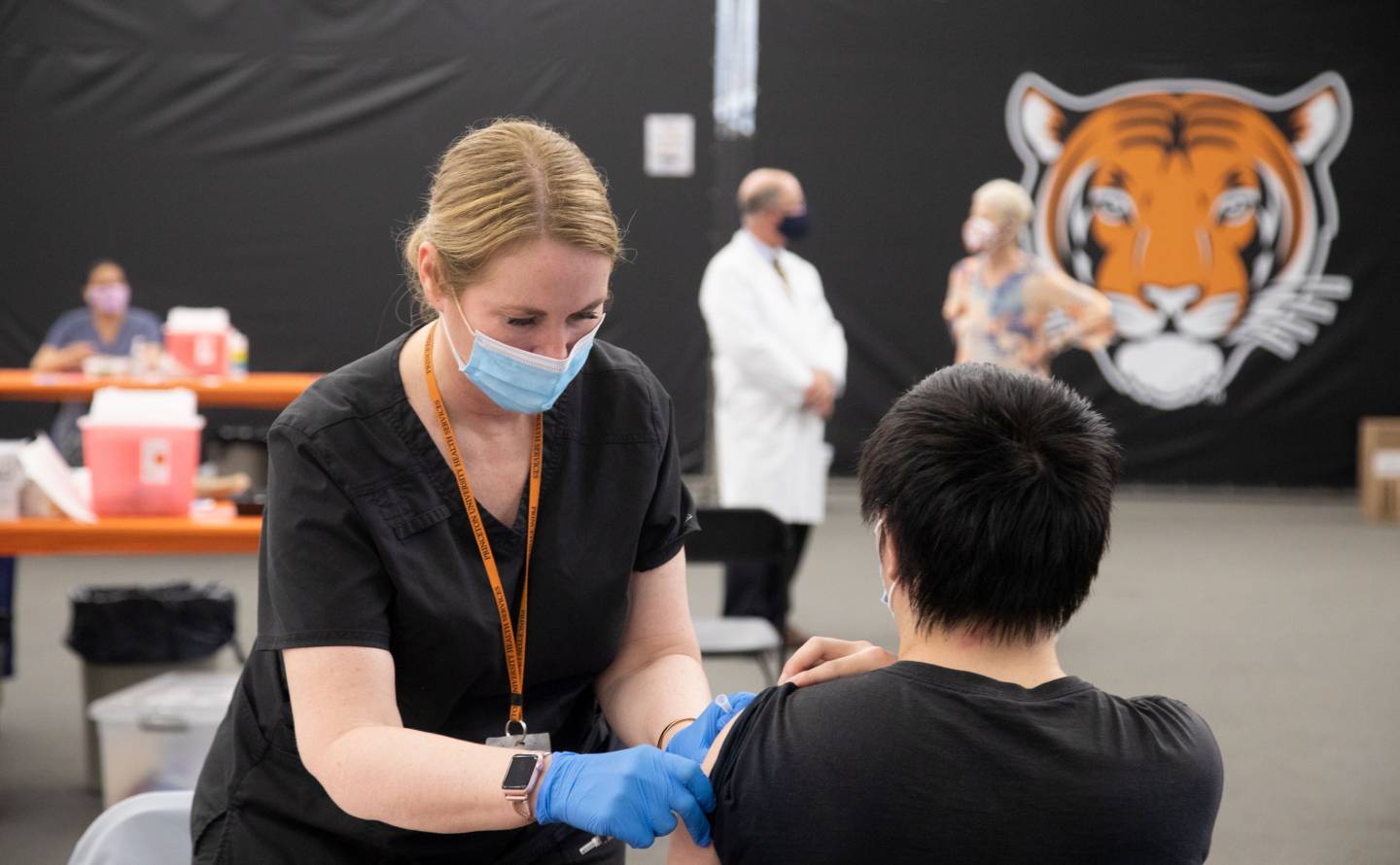 Princeton University held 51 vaccine clinics open to the public and administered 16,673 vaccine doses in coordination with the Princeton Board of Health.

In advance of the meeting, the University prepared a summary of various contributions to and partnerships with the town in 2021, including: a $3.8 million voluntary contribution to the municipality; $11.3 million in property and sewer taxes (making the University the largest property taxpayer in Princeton); and initiatives by Campus Dining that provided more than 59,000 meals to food-insecure individuals and families in the Princeton area.

“I would recommend to all my fellow Princetonians to take a look at the report,” said council member Leighton Newlin, who was elected to his seat in November 2021. “I actually was shocked at how much I did not know of the engagement with many aspects of the University.”

For decades, Princeton University has made voluntary contributions to the Municipality of Princeton. In late 2020, the municipality and the University agreed to a two-year extension of the existing contributions agreement that had been adopted in 2014. By the end of this year — under the new 2020 agreement — the University will have contributed nearly $8.5 million to the municipality. The agreement includes a $850,000 commitment to support the hiring of career personnel for the Princeton Fire Department and a $250,000 commitment toward the construction of a new storage facility for the municipal Department of Public Works.

Since the earliest days of the pandemic, the University also has worked with community partners to support local COVID-19 relief efforts. These include the establishment of the $1 million Princeton University Relief Fund to provide direct financial support to community organizations and businesses. Of those monies, $400,000 benefitted the Princeton Area Community Foundation COVID Relief Fund, $100,000 was distributed to the Coronavirus Emergency Relief Fund coordinated by the Princeton Children’s Fund, and $350,000 launched the Princeton Small Business Resiliency Fund. 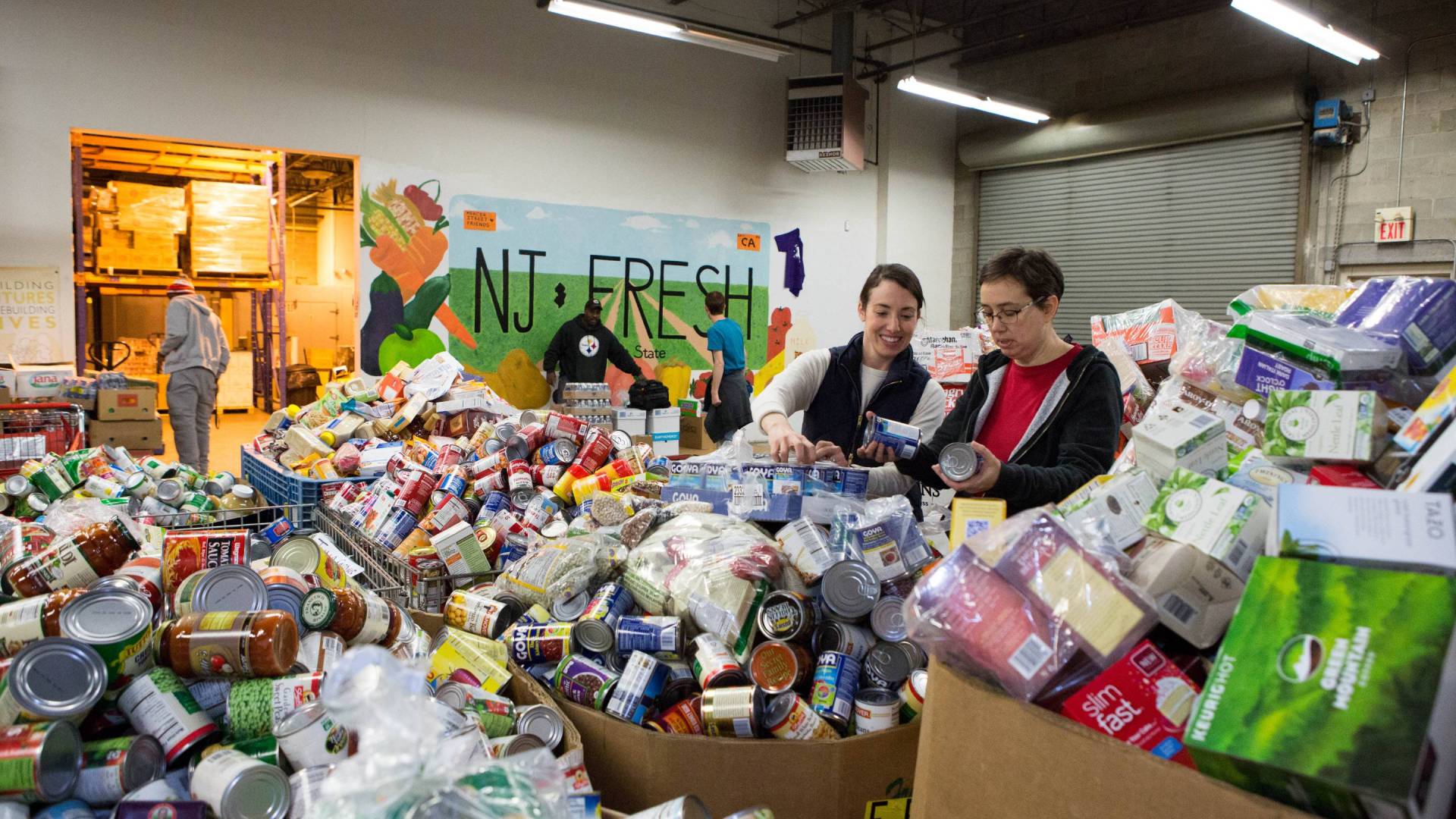 Kaitlin Lutz (left), director for administration, finance and planning at the School of Engineering and Applied Sciences, and Karen Haskin (right), associate dean of academic affairs in the Office of the Dean of the Faculty, sort food for the Mercer Street Friends Food Bank.

Photo courtesy of the Office of Community and Regional Affairs

“If I listened to everything that went back and forth tonight, I kind of hear the whole theme about joint planning, joint initiatives. I think the word ‘joint’ is the key word there, and looking forward to exploring how we could do more things together,” Freda said. “I'm very encouraged for the future.”

Both Eisgruber and the council members credited the success of their COVID-19 collaboration and other initiatives largely to Kristin Appelget, Princeton’s assistant vice president for community and regional affairs. They additionally noted the efforts of municipal health officer Jeffrey Grosser.

Council member Eve Niedergang thanked Eisgruber for the University’s pandemic assistance through its small business fund, for helping restaurants provide meals to people in the community, and for its vaccine clinics — all of which culminate in “a spirit of generosity and sharing that we really appreciate.”

Council President Leticia Fraga said she is often reminded of University services that are available to the community, including Princeton’s Tiger Transit, or its two in-town art galleries Art@Bainbridge and Art on Hulfish, and hopes to do more to promote those to the general public.

She also said she was pleased to learn about a pilot program where students can use dining points at local restaurants — an idea she surfaced at a previous meeting between Eisgruber and the Princeton Council. 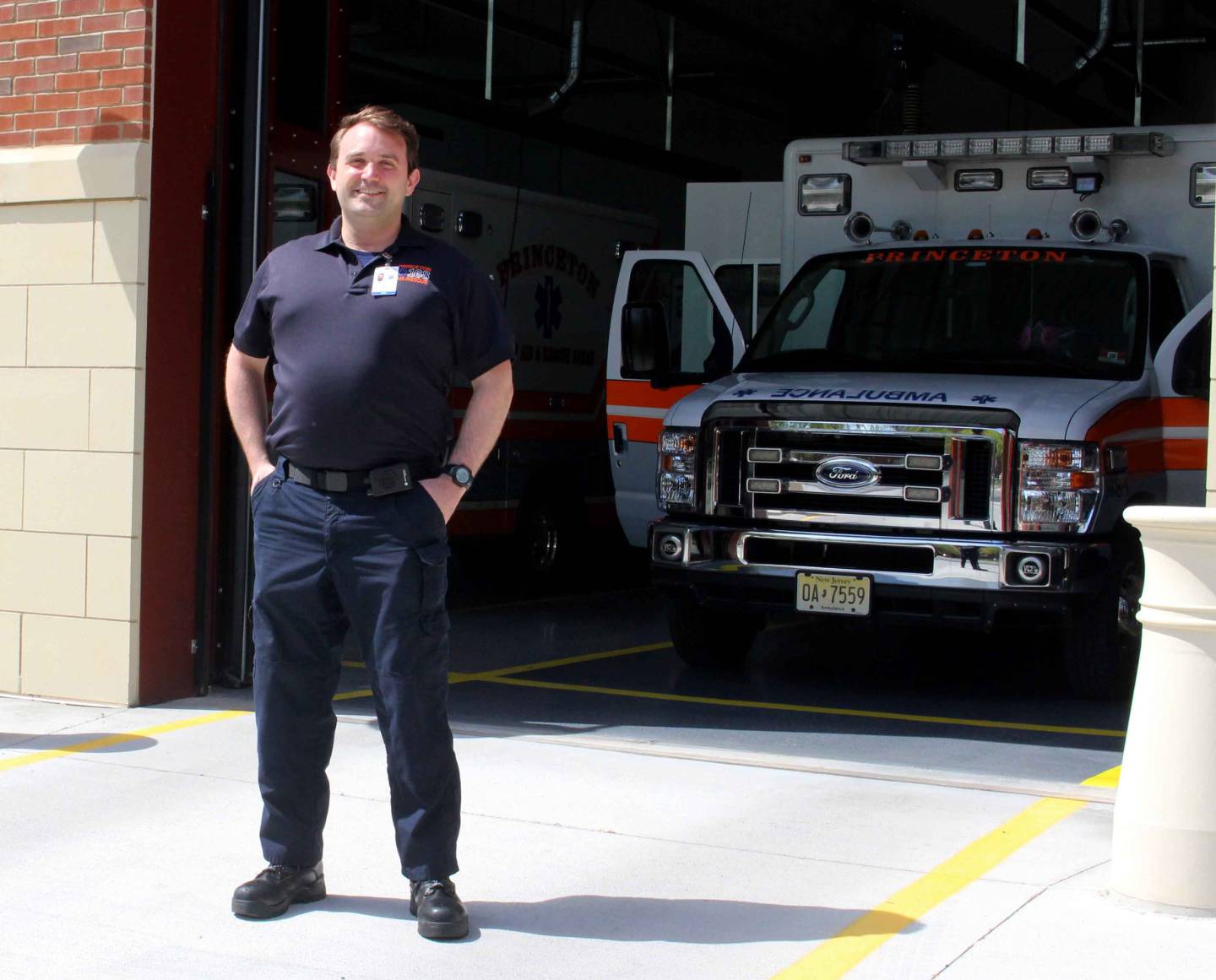 Senior research specialist Eric Mills volunteers for the Princeton First Aid & Rescue Squad, an independent, nonprofit 110-member group of emergency medical technicians serving the Princeton area. He’s one of numerous members of the Princeton University community, mainly staff and students, who volunteer their time with area rescue crews. Mills, who received his doctorate in electrical engineering from Princeton and works in the Micro/Nano Fabrication Lab, joined the rescue squad after training as a volunteer with the Princeton fire department.

“It’s a suggestion I have made, not necessarily just to help our our local businesses during the pandemic, but also, I had seen that as a need from talking to some of our student volunteers,” Fraga said. “I hope that this pilot program is successful and it’s going to be something that can be expanded and be permanent, to really ensure that those students who might not otherwise be able to dine off campus would be able to do so, and also help our local business community.”

Council member Michelle Pirone Lambros commended the University for other initiatives to assist local dining establishments. A student-led initiative, Tigers in Town, brought more than $171,000 to over 40 local businesses. Another student-driven initiative, Tigers on Nassau, helped business owners with marketing and technology during the pandemic.

“One of the things that we’d really like to see in the business community … is more investment in small entrepreneurship, particularly minority entrepreneurship,” Pirone Lambros said. “It creates not just diversity, but resiliency and sustainability for our town.”

Council members identified other areas for future collaboration. David Cohen raised the possibility of shared traffic and transportation messaging regarding upcoming construction in the central business district, including the reconstruction of Witherspoon Street and the building of the Graduate Hotel at the intersection of Nassau and Chambers streets, which will likely impact downtown circulation.

“If there’s something that can be done to try and divert some of the ordinary traffic, not permanently, but just while this construction is going on, finding places for them to park on campus, and signage to encourage people to stay out of the center of town with their vehicles as much as possible, it’s really going to be helpful,” he said.

Council member Mia Sacks asked how the University might engage with the community regarding free speech and disinformation, and how the community can avoid polarization created by information bubbles.

“A personal priority for me as a council member has been to try to promote civil discourse in everything we discuss here in town,” she said.

Eisgruber responded by citing the Alumni Day speech of 2021 Nobel Peace Prize laureate Maria Ressa, Class of 1986, who is focused on the issue as CEO and president of the independent news outlet Rappler.com in the Philippines. Ressa’s reporting on the authoritarian administration of President Rodrigo Duterte has been met with continual political harassment and arrests by the Duterte government.

“She said, and I agree, that much of the crisis that we are facing is attributable to changing modes of communication, and in particular, to the incentives that are built into social media,” Eisgruber said. “We now have increasing evidence of what many people have been saying for a long time, which is that social media is configured in ways that basically feeds our anger.”

Bringing awareness to how social media algorithms work, along with promoting truth seeking, are among the ways in which universities can lead on this issue, he said.

Eisgruber, Princeton officials underscore the mutual benefits of partnership during the pandemic