Forest-dwelling bacteria known for forming slimy swarms that prey on other microbes can also cooperate to construct mushroom-like survival shelters known as fruiting bodies when food is scarce. Now a team at Princeton University has discovered the physics behind how these rod-shaped bacteria, which align in patterns like those on fingerprint whorls and liquid crystal displays, build the layers of these fruiting bodies. The study was published online Nov. 23 in Nature Physics.

“In some ways, these bacteria are teaching us new kinds of physics,” said Joshua Shaevitz, co-director of the Center for the Physics of Biological Function and a professor of physics and the Lewis-Sigler Institute for Integrative Genomics (LSI). “These questions exist at the intersection of physics and biology. And you need to understand both to understand these organisms.”

Myxococcus xanthus, or Myxo for short, is a bacterial species capable of surprisingly cooperative behaviors. For example, large numbers of Myxo cells come together to hunt other bacteria by swarming toward their prey in a single undulating mass. 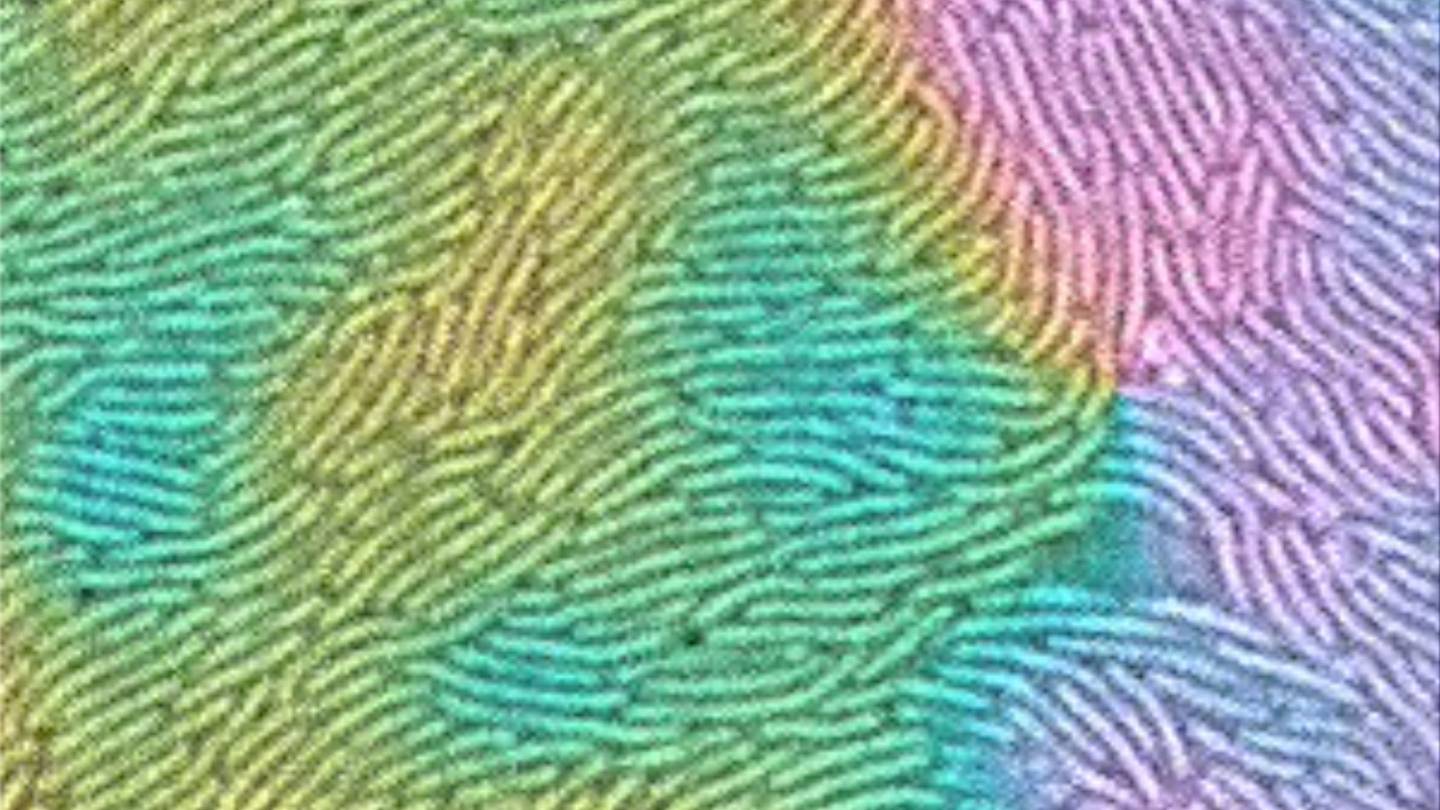 Rod-shaped bacterial cells of the species Myxococcus xanthus cooperate by forming packs to hunt for food and build structures called fruiting bodies, which aid in survival. When two such swarms encounter each other, the resulting pileup of cells creates sites, called topological defects, at which rods can climb on top of each other to construct the next layer of the fruiting body. The colors represent the various swarms of cells.

When food is scarce, however, the rod-like cells stack atop one another to form squishy growths called fruiting bodies, in which some of the Myxo cells transform into spores capable of rebooting the population when fresh nutrients arrive. But until now, scientists haven’t understood how the rods acquire the ability to begin climbing on top of each other to build the droplet-like structures.

To find out more about how these bacteria behave, the researchers set up a microscope capable of tracking Myxo’s actions in three dimensions. The scientists recorded videos of the rod-shaped microbes, which pack closely together like stampeding wildebeest, rushing across the microscope dish in swaths that swirl around each other, forming fingerprint-like patterns.

When two swaths meet, the researchers observed, the point of intersection was exactly where the new layer of cells started to form. The bacteria started to pile up and created a situation where the only direction to go was up.

“We found that these bacteria are exploiting particular points of the cell alignment where stresses build that enable the colony to construct new cell layers, one on top of the other,” said Ricard Alert, a postdoctoral research fellow in the Princeton Center for Theoretical Science and one of the study’s co-first authors. “And that's ultimately how this colony responds to starvation.”

Researchers call the points where the massing cells collide “topological defects,” a term that refers to the mathematics that describe these singular points. Topology is the branch of mathematics that finds similarities between objects such as teacups and donuts, because one can be stretched or deformed into the other.

Myxo bacterial cells behave much like liquid crystals, the rod-shaped molecules that are found in smartphone screens. Unlike passive liquid crystals, however, Myxo rods are alive and can crawl. The bacteria most likely have evolved to take advantage of both passive and active factors to build the fruiting bodies, the researchers said. 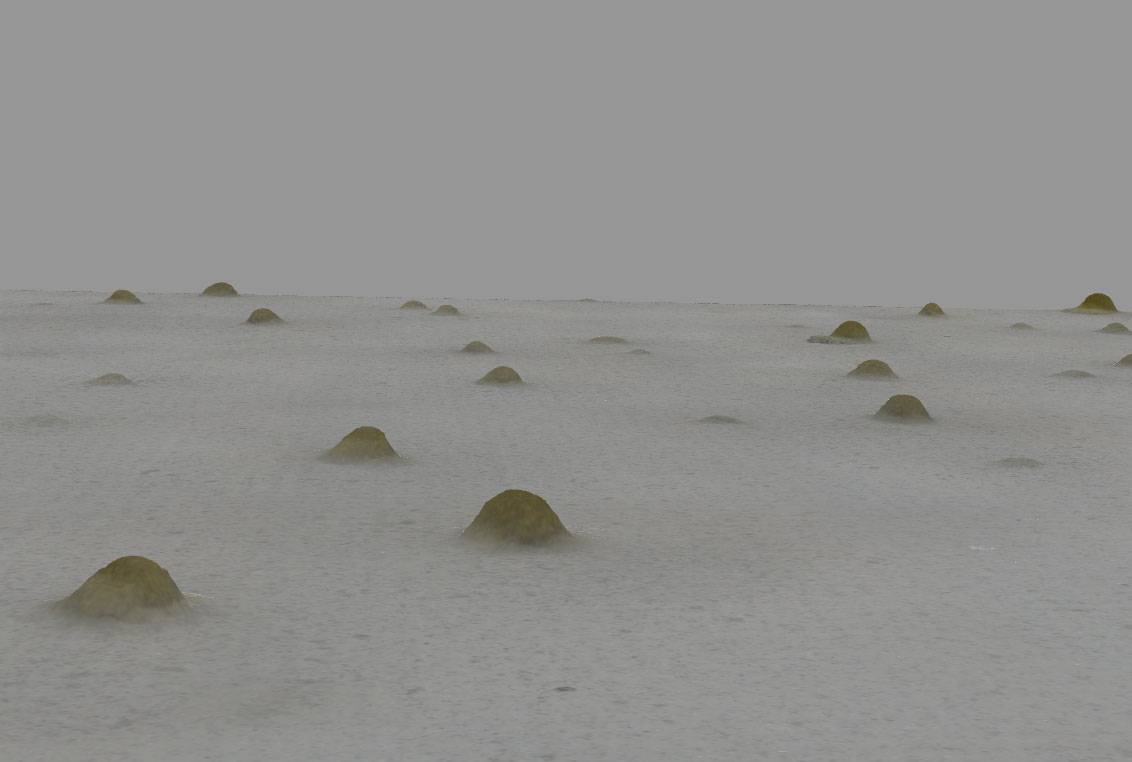 When food is scarce, members of a species of forest-dwelling bacteria come together to build structures called fruiting bodies to survive until food becomes more available. Princeton researchers have identified how these bacteria harness the same physical laws that lead to the whorls of a fingerprint to build the structures, which consist of the bacterial cells themselves and secretions that glue the edifice together. The structures are about a tenth of a millimeter high, or tens to hundreds of times taller than a single bacterial cell. On the human scale, this size compares to the height of a skyscraper.

Katherine Copenhagen, an associate research scholar in the Lewis-Sigler Institute and a co-first author on the study, took videos of the cells under the microscope and analyzed the results. She said that at first, the team was not sure what they were looking at.

“We were trying to study layer formation in bacteria to find out how these cells build these droplets, and we had just gotten a new microscope, so I put a sample of the bacteria from another project that had nothing to do with layer formation under the microscope and imaged it for a few hours,” Copenhagen said. “The next time our group got together, I said ‘I have this video, so let’s take a look at it.’ And we were mesmerized by what we saw.”

The combination of physics and biology training among the researchers enabled them to recognize new theoretical insights into how the vertical layers form. “It says something about the value of the collaborative culture at Princeton,” said Ned Wingreen, the Howard A. Prior Professor in the Life Sciences and a professor of molecular biology and LSI. “We chat with each other and share crazy ideas and show interesting data to each other.”

“A moment that I remember quite vividly,” Alert said, “is watching these videos at the very beginning of this project and starting to realize, wait, do layers form exactly where the topological defects are? Could it be true?” To explore the results, he followed up the studies by confirming them with numerical and analytical calculations.

“The initial realization that came just by watching these movies, that was a cool moment,” he said.

“Topological defects promote layer formation in Myxococcus xanthus colonies,” by Katherine Copenhagen, Ricard Alert, Ned S. Wingreen and Joshua W. Shaevitz, was published online Nov. 23 in the journal Nature Physics (DOI: 10.1038/s41567-020-01056-4). This work was supported in part by the National Science Foundation through grant PHY-1806501 and through the Center for the Physics of Biological Function (PHY-1734030), and by the National Institutes of Health (R01GM082938). Additional support was provided by the Human Frontier Science Program (LT000475/2018-C). The work was conducted in part at Princeton’s Imaging and Analysis Center, which is partially supported by the Princeton Center for Complex Materials, a National Science Foundation-MRSEC program (DMR-284 1420541).