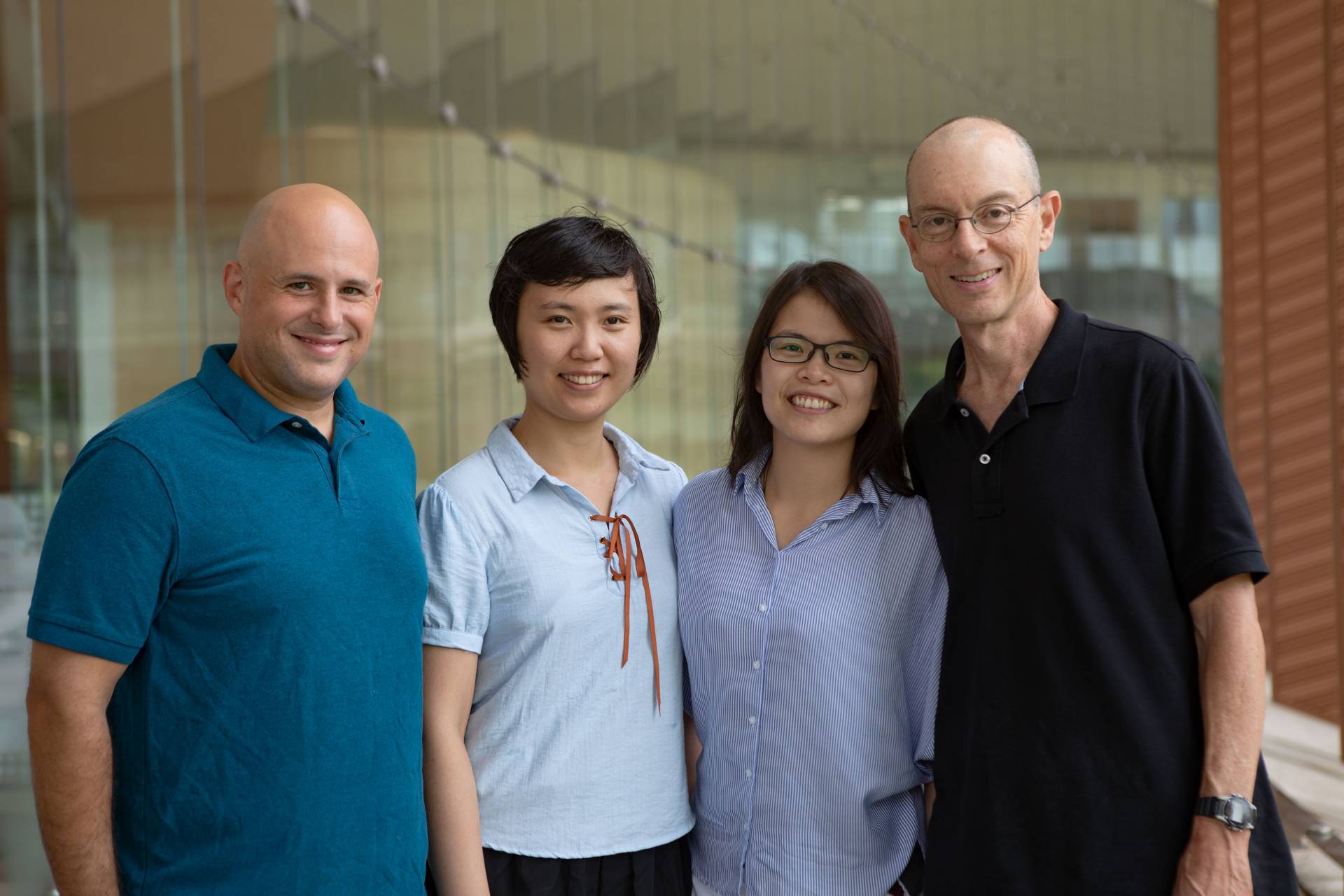 E. coli bacteria have different solutions to cope with different types of nutrient deprivation, including an 'optimistic' response to carbon limitations, according to a team of Princeton researchers, including (from left) Professor Zemer Gitai, associate research scholar Zhiyuan Li, graduate student Hsin-Jung (Sophia) Li and Professor Ned Wingreen. Carbon-limited cells generate a large number of inactive assembly lines (ribosomes), nitrogen-limited cells turn out proteins more slowly, and phosphorous-limited cells use only half as many assembly lines to generate the same number of proteins.

A team of researchers from across the Princeton University campus collaborated to determine how E. coli bacteria respond when they are deprived of three key nutrients: carbon, nitrogen and phosphorus.

They were surprised to find that the bacteria had different strategies for dealing with each of the nutrient restrictions. Even more surprisingly, when carbon was limited, E. coli responded by building up its protein-production infrastructure, essentially preparing for a day when carbon would again be abundant.

“E. coli has that essential optimism — it expects it will have access to more carbon in the future,” said Zemer Gitai, the Edwin Grant Conklin Professor of Biology and a senior author on a paper released online July 23 from Nature Microbiology. All seven of the co-authors are Princeton scientists, from six departments.

It can help to think of the cell as a toy factory filled with individual assembly lines (ribosomes) producing toys (proteins), Gitai said. Carbon and nitrogen are key components of the toys, and phosphorus is vital to the assembly lines.

“When resources get tight, the cell has a decision to make,” Gitai said. “What’s the right usage of materials — of its available resources? ‘Am I going to devote resources into making more assembly lines or more toys?’”

The “toys,” proteins, are the fundamental building blocks that allow cells to grow, divide or increase in mass. The faster a cell produces proteins, the faster it grows. Scientists have known for decades that there is a straightforward, linear relationship between the number of ribosomes (assembly lines) and the rate of protein (toy) production in E. coli. This has led to the widely accepted theory that each of these assembly lines is “optimized,” operating constantly at its peak efficiency to produce proteins as fast as possible.

“Surprisingly, the current study radically changes this perspective,” said Ned Wingreen, the Howard A. Prior Professor in the Life Sciences and a professor of molecular biology and the Lewis-Sigler Institute for Integrative Genomics (LSI) who was also a corresponding author on the paper.

The research team discovered that when they limited access to carbon and nitrogen, key ingredients in the toys, the cells grew slowly but steadily while also producing more and more assembly lines that sat idle.

“Under extreme carbon limitation, about half the ribosomes — half the assembly lines — are not even working,” said Gitai. “That seems counterintuitive, right? That seems wasteful. Why build your factory so you have twice as many assembly lines as you need, and then not run half your assembly lines? We posited that that might be good for ramping up production when times change, and sure enough, that’s what we saw.”

These bacteria live in feast-or-famine environments like the human gut, where a long hungry period can end with the sudden arrival of a cheeseburger. “When all these new nutrients come in, you have the ability to produce faster,” Gitai said. “You already made all those assembly lines — they’re ready, and now they can take off, now you can beat your competitors to the punch, because you don’t have to invest in all this infrastructure, making all these new assembly lines. You have them set up.”

This has interesting implications for E. coli competition strategies, said graduate student Hsin-Jung (Sophia) Li, who is the first author on the paper. “Maybe the goal of the bacteria is not to maximize the current growth,” she said. “They might be preparing for better times — more forward-looking.”

“Overall, this work gives a new perspective on bacteria, and potentially other organisms, suggesting they evolved not only to deal with current conditions but also for life in a changing world,” said Wingreen.

“It has been an exciting journey,” said Junyoung Park, a 2016 Ph.D. graduate in chemical and biological engineering who is now a professor of chemical and biomolecular engineering at the University of California-Los Angeles. “We started with a simple observation — nutrient-specific RNA-to-protein ratios — but ended up with fascinating insights into the cell’s competition strategies.”

The ribosome assembly lines depend on RNA, which is phosphorus-rich, so by limiting its availability, the researchers essentially made toy ingredients cheap but assembly lines very expensive.

“The first surprise was that there’s a nutrient-specific story here, that we achieved the same growth rate three different ways,” said Gitai. “But the real surprise was the phosphorus. We found that if we make the assembly lines more expensive, suddenly the same assembly lines can pump out toys at the same rate, using half as many assembly lines. That tells us that under the carbon- and nitrogen-limited conditions, those assembly lines were actually not working as fast as they possibly could.”

This overturned the long-held model of the optimized ribosome and prompted the researchers to investigate the mechanisms at work in the ribosomes, using a combination of quantitative experiments, led by Li, buttressed by the modeling and theory work of Wingreen and Zhiyuan Li, an associate research scholar in the Princeton Center for Theoretical Science. They also collaborated with Christopher King, who graduated in 2017 with a physics concentration, and Joshua Rabinowitz, a professor of chemistry and LSI.

Converting the enormous quantities of biological data into a clear theory illustrates the “charm” of data science, said Zhiyuan Li, from processing the measurements into “individual pearls, and then stringing them together into a beautiful necklace by mathematical modeling that reveals the underlying connections.”

“This paper is a great contribution to the community,” said Ron Milo, principal investigator of the Department of Plant and Environmental Sciences at the Weizmann Institute of Science, who was not involved in this research. “It gives us better insight into how cells make decisions regarding their allocation of resources, which can be relevant for biotechnological production of value-added chemicals.”

The research also raises a new question, said Gitai: “Do many bacterial species use this strategy? You could imagine that in a community of bacteria, there are some species that are optimists, some that are pessimists. … It’s kind of an appealing idea that it’s this ‘eternal optimism’ of E. coli that allows it to trade off, if you will, between immediate benefit and the longer term. When times are bad, it’s going to say, ‘Okay, I’m not going to worry about doing as well as I possibly can right now, but I’ll prepare for when times get better.’”

One of the biggest surprises of the research was that such a thoroughly studied bacteria still has tricks up its microscopic sleeves, said Sophia Li. “Even E. coli, arguably the most well-understood organism, can still give us new surprises and interesting biology to learn.”