The bacteria that cause the life-threatening disease cholera may initiate infection by coordinating a wave of mass shapeshifting that allows them to more effectively penetrate the intestines of their unwitting victims, according to a study led by Princeton University.

The researchers discovered the protein that allows the bacterium Vibrio cholerae to morph into a corkscrew shape that likely helps it twist into — and then escape — the protective mucus that lines the inside of the gut. The researchers report in the journal Cell that expression of the shape-changing protein — which they named CrvA — is activated through the process of quorum sensing, in which bacteria communicate with one another to coordinate an infection. 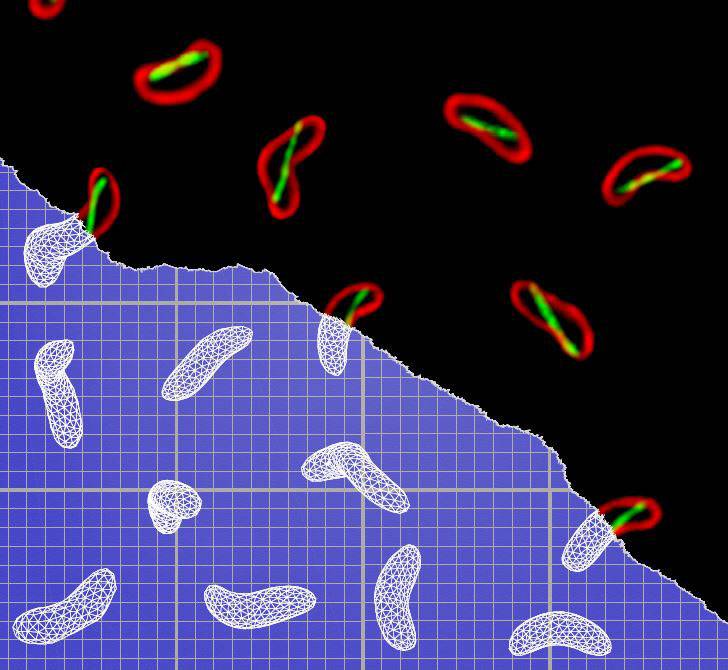 Princeton University researchers have identified the protein that allows Vibrio cholerae — the bacteria behind the life-threatening disease cholera — to morph into a corkscrew shape that allows them to more effectively penetrate their victims' intestines. In the image above, red-stained V. cholerae bacteria (right) exhibit the shape-changing protein (stained green), which the researchers named CrvA. The schematic models (left) highlight the bacteria's twisted shape during infection. (Image by Thomas Bartlett, Department of Molecular Biology)

In experiments, the researchers found that curved V. cholerae cells could more easily move through a thick gel. On the other hand, their research also showed that straight rod-shaped V. cholerae could not infect a host as efficiently.

If shape plays a critical role in V. cholerae infection, then cholera treatments could be developed that either impede the bacteria's ability to morph, or alter a patient's gut so that the bacteria can't infect it, said corresponding author Zemer Gitai, Princeton's Edwin Grant Conklin Professor of Biology and professor of molecular biology. Each year, millions of people worldwide develop cholera, resulting in thousands of deaths, primarily from dehydration. Cholera is particularly rampant where clean water is scarce such as in the developing world, war zones and areas reeling from natural disasters.

"We know that if V. cholerae can't be curved, it can't make animals as sick," Gitai said. "That suggests that if we can prevent them from becoming curved, that would limit their ability to make people sick. How to do that still needs to be figured out."

The research found that filaments of CrvA assemble on one side of a V. cholerae bacterium, forming a hard polymer that slows growth on that side of the cell. The other side of the bacterium grows faster, resulting in the curved shape. CrvA expression is activated by quorum sensing and increases as the population density of bacteria grows, the researchers found. The bacteria may use quorum sensing to alert one another that their environment has changed from water — where the rod shape is advantageous — to a host's gut, the researchers reported.

Generally, the findings suggest that bacteria-caused illnesses may hinge significantly on the bacteria's physiology and their interaction with the environment, said first author Thomas Bartlett, a graduate student in Gitai's research group. For instance, all curved species of the genus Vibrio — including the species V. vulnificus, which is found in undercooked seafood and causes intense sickness — exhibit the protein CrvA, he said.

Bacteria have evolved specific traits to survive in their ideal environment, such as the intestinal tract, Bartlett said. Research from Gitai's group published in 2014 found that the mysterious curvature of the benign bacteria Caulobacter crescentus helped them better withstand currents in the lakes, ponds and streams on which the bacteria grow.

"V. cholerae and Caulobacter are different enough that it looks like they evolved separately, but they're actually very similar," Bartlett said. "In both cases, their curvature allows them to deal with the mechanics of the world they live in. It says something about life at this scale, that navigating the physical environment is an issue a lot of bacteria deal with and they have evolved similar solutions independently."

A computer model the researchers developed helped them understand how the bacteria internally function to grow, adapt and infect. Under a microscope, V. cholerae appear curved and flat. The researchers' modeling program, however, revealed that the bacteria take on a twisting shape similar to an auger that likely help them twist into — and then escape — the protective mucus that lines the inside of the gut. (Video by Thomas Bartlett, Department of Molecular Biology)

Scientists can exploit those adaptations by developing treatments that target a bacteria's ability to successfully function in their environment, Gitai said. This approach, as opposed to killing bacteria outright, could help curtail the growing problem of bacteria becoming resistant to antibiotics. Bacteria would still be alive, but their infectiousness would be disabled.

The function of the numerous forms bacteria take on has been a longstanding mystery in biology, said Nina Salama, a principal investigator at the Fred Hutchinson Cancer Research Center in Seattle. The Princeton research illuminates that internal mechanics may be how bacteria regulate shape, and helps address the importance of that ability in aiding infection and reproduction, said Salama, who is familiar with the research but had no role in it.

"This paper gets to the root of a question that has been open since [Dutch scientist and so-called 'Father of Microbiology'] Antonie van Leeuwenhoek looked through a microscope 300 years ago and saw that bacteria have all these different shapes," Salama said. "I think they've done the first step of the why — if we disrupt shape, does it affect the bacteria's ability to colonize and infect? The answer is yes."

Significantly, Salama said, the researchers found that CrvA localizes to the periplasm, a cellular compartment between the outer and inner membrane of Gram-negative bacteria such as V. cholerae. While bacteria use other protein filaments to assume various shapes, CrvA is the first such filament discovered in the periplasm. From a treatment standpoint, the periplasm is more accessible than a bacterium's interior, or cytoplasm, she said.

"It's pretty exciting from a clinical standpoint that the factor they found that regulates the bacteria's shape is in the periplasm," Salama said. "It could have implications for drug design and it certainly presents a new target. Whether targeting that alone would affect the manifestations of the disease is not clear, but it certainly could be used in conjunction with antibiotics." 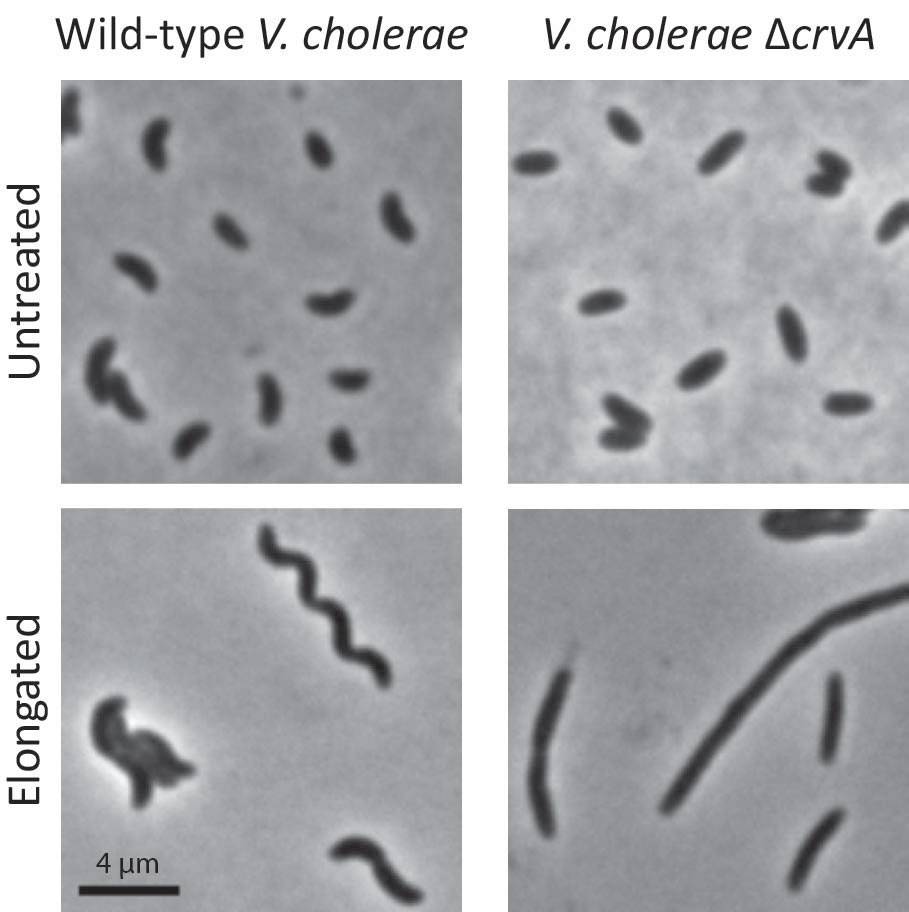 In experiments, the researchers found that curved V. cholerae cells (left column) could more easily move through a thick gel. Straight rod-shaped V. cholerae that had the protein CrvA suppressed (right column) could not infect a host as efficiently. The researchers elongated the wild-type and CrvA-suppressed cells (bottom row) to accentuate the difference in shape the protein produces. (Image by Thomas Bartlett, Department of Molecular Biology)

Scientists also could apply the computer model the researchers developed for this study to understand how bacteria internally function to grow, adapt and infect, Salama said. Bartlett and second author Benjamin Bratton, a Princeton associate research scholar in molecular biology, developed a program called Quantitative Analysis of Sacculus Architecture Remodeling, or QuASAR, to understand how CrvA operates at the small scale of the periplasm.

"We have so many tools to study DNA and genes, but we haven't had that many tools to study how bacteria manipulate the membranes and cell walls at the subcellular level," Salama said. "Basically, it will allow other questions to be answered in other systems."