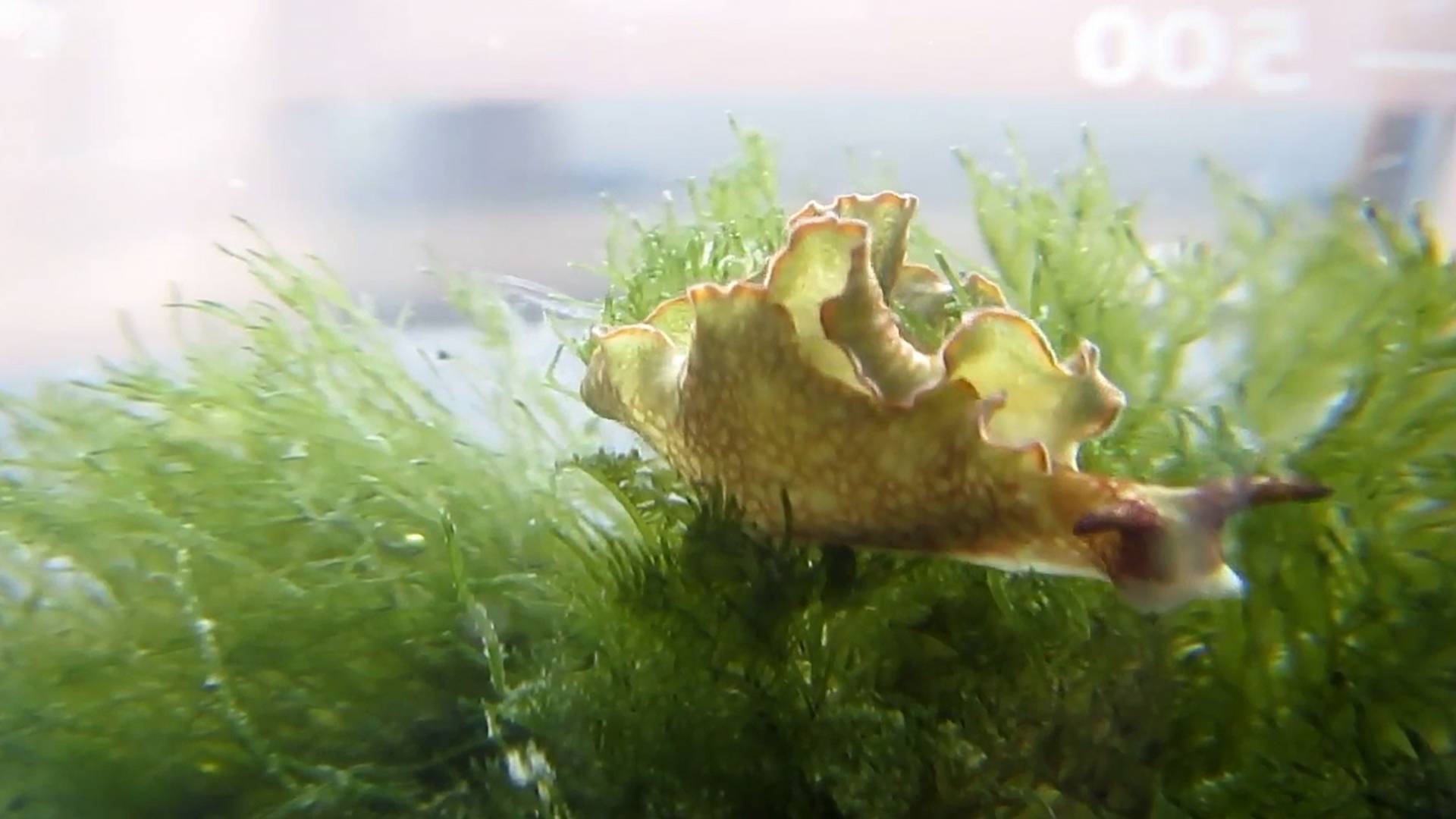 Researchers have found that a sea slug that acquires defensive chemicals from eating algae has a surprising twist. The toxic chemicals, kahalalides, are actually made by bacteria that live inside the algae. The slug, algae and bacteria form a symbiotic relationship.

Delicate yet voracious, the sea slug Elysia rufescens grazes cow-like on bright green tufts of algae, rooting around to find the choicest bits.

But this inch-long marine mollusk gains not only a tasty meal — it also slurps up the algae's defensive chemicals, which the slug can then deploy against its own predators.

In a new study, a Princeton-led team has discovered that these toxic chemicals originate from a newly identified species of bacteria living inside the algae. The team found that the bacteria have become so dependent on their algal home that they cannot survive on their own. In turn, the bacteria devote at least a fifth of their metabolic efforts to making poisonous molecules for their host.

The intertwined story of these three characters — the sea slug E. rufescens, marine algae of the genus Bryopsis, and the newly identified bacteria — form a three-way symbiotic relationship. A symbiotic relationship is one in which several organisms closely interact. In this example, the slug gets food and defensive chemicals, the algae get chemicals, and the bacteria get a home and free meals for life in the form of nutrients from their algae host.

"It's a complicated system and a very unique relationship among these three organisms," said Mohamed Donia, assistant professor of molecular biology at Princeton University and senior author on the study. "The implications are big for our understanding of how bacteria, plants and animals form mechanistic dependencies, where biologically active molecules transcend the original producer and end up reaching and benefitting a network of interacting partners."

Researchers at Princeton and the University of Maryland Center for Environmental Science's Institute of Marine and Environmental Technology unwound this tale using powerful genomic techniques to decipher who does what in the relationship. They sequenced the collective genomic information of the slugs, algae and their microbiomes, which are the bacteria that live inside these organisms. Then they used computer algorithms to figure out which genes belonged to which organism. Through this method they identified the new bacterial species and linked it to the production of the toxins.

The team found that the bacterial species, which they named Candidatus Endobryopsis kahalalidefaciens, produces about 15 or so different toxins, known as kahalalides. These chemicals are known to act as a deterrent to surrounding fish and other marine animals. At least one of the kahalalides has been evaluated as a potential cancer drug because of its potent toxicity.

The researchers also discovered that the bacteria have permanently sacrificed their independence for a life of security, as they no longer possess the genes required for survival outside the algae. Instead, about a fifth of the bacteria's genome is directed toward pumping out toxic molecules that stop predators from eating the bacterium's home.

One predator that can eat the toxins is the slug E. rufescens. The slug stores them, building up a chemical arsenal that is ten times more concentrated than the toxins in the algae.

One of the questions the team asked was whether the slug acquires not just the chemicals but also the factory — the bacteria — itself. But they found that the slug doesn't retain the ingested bacteria but rather digests them as food, keeping just the chemicals.

Elysia rufescens, named for its reddish hue, lives in warm shallow waters in various locations including Hawaii, where the researchers collected the slugs. Elysia belongs to a family of "solar-powered slugs," so named because they sequester, along with the defensive chemicals, the algae's energy-making photosynthetic machinery, making them some of the few animals in the world that create their own nutrients from sunlight.

Donia became interested in how algae make chemical defenses because several other marine organisms — such as sponges and tunicates — use bacterial symbionts to make toxins. He decided to look at the chemical structures of the toxins and found that their structure suggested they were made by bacteria or fungi.

For assistance he turned to Russell Hill, professor at the University of Maryland Center for Environmental Science and world's expert in marine ecology, including this system. Hill and his then-graduate student Jeanette Davis assisted Donia and Princeton postdoctoral researchers Jindong Zan, Zhiyuan Li and Maria Diarey Tianero in collecting the algae and slugs in Hawaii. Zan and Li share co-first-authorship on the study.

"Our collaboration, building on the work of colleagues and under the leadership of Mohamed, has finally solved the long-standing mystery of the true producer of the kahalalide compounds," Hill said. "It is so satisfying to now understand the remarkable bacterium and its pathways that synthesize these complex compounds."

The team compared the bacteria to a factory because the organism consumes raw materials in the form of amino acids supplied from the algae and releases a finished product in the form of toxic chemicals.

This theme of specialized bacterial symbionts that have evolved to perform one function — to make defensive molecules for the host in exchange for a protected living space — appears to be surprisingly common in the marine environment, from algae to tunicates to sponges, Donia said.

This is the second such relationship the team has identified. Their previous study, published April 1 in the journal Nature Microbiology, identified a bacterium that lives in symbiosis with marine sponges and produces toxins that protect the sponge from predation.

"The weirdest thing is that the sponge has actually evolved a specialized type of cells, which we called 'chemobacteriocytes,' dedicated entirely to housing and maintaining a culture of this bacterium," Donia said. "This is very strange, given the small number of specialized sponge cells in general. Again, the bacterium cannot produce the substrates and cannot live on its own."

Funding for this research has been provided by Princeton University, the National Institutes of Health Director’s New Innovator Award (ID 1DP2AI124441), the National Science Foundation Physics Frontier Center grant through the Center for the Physics of Biological Function (PHY-1734030), and an NSF grant (PHY-1607612).