Albert Raboteau Jr., the Henry W. Putnam Professor of Religion, Emeritus, died peacefully at home in Princeton on Sept. 18 following a years-long battle with Lewy Body Dementia. He was 78. 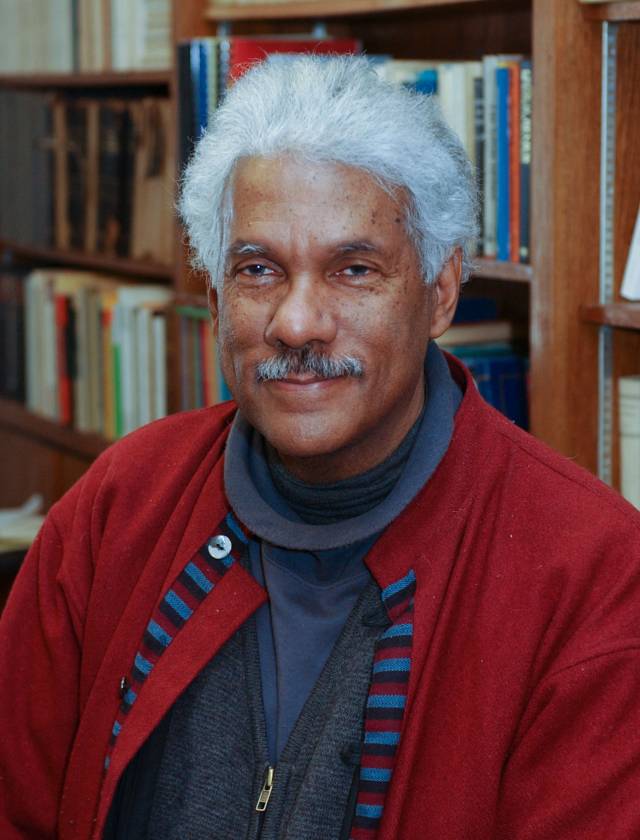 During his 30-year tenure at Princeton, Raboteau was a beloved teacher, advisor and mentor to many undergraduate and graduate students, some of whom would later become his colleagues.

“Al Raboteau was a towering figure in the fields of African American religious history, African American studies and American religious history,” said Judith Weisenfeld, the Agate Brown and George L. Collord Professor of Religion, chair of the Department of Religion, and a 1992 graduate alumna. “I was fortunate to be his student, to have him as my dissertation advisor when I was a graduate student at Princeton, and to be his colleague when I returned to the faculty years later.”

She added: “It is impossible to account for everything I learned from him about the field of Black religious studies, and it was an enormous privilege to know him as a thinker, teacher, scholar and person. He was a deeply kind man, whose quiet manner called those around him to quiet attention, and a brilliant person in mind and spirit.”

“Professor Raboteau taught me so much: how to move about the archive, how to trust and be comfortable with my questions, and how to write clearly and with sophistication. Most importantly, Al taught me how to walk humbly with confidence,” said Eddie Glaude Jr., the James S. McDonnell Distinguished University Professor, professor and department chair of African American studies, director of the program in African American studies, and a 1997 graduate alumnus. “His brilliance knew no boundaries. His work helped create an entire field, and he could move just as easily in the fields of literature and film.”

A generous and thoughtful mentor, Raboteau was always eager to help his students. When Glaude was a graduate student, an editor from the University of Chicago Press came to campus to get a sense of Raboteau’s next book project. Rather than answer the editor’s questions, Raboteau told the editor about Glaude’s dissertation and arranged a meeting between Glaude and the editor, who ended up publishing Glaude’s first book.

In 1998, Raboteau received the Howard T. Behrman Award, Princeton’s highest award for distinguished achievement in the humanities. He was honored by the University again in 2006 with the Martin Luther King Day Journey Award for Lifetime Service in recognition of his work to advance King’s dream for America.

“My dear brother Al Raboteau was The Godfather of Afro-American Religious Studies,” said Cornel West, the Class of 1943 University Professor in the Center for African American Studies, Emeritus. “He also was one of the few great prophetic voices on the Princeton faculty. He was a kind and gentle giant in the life of the mind and spirit.”

He is the author of “Slave Religion: The ‘Invisible Institution’ in the Antebellum South,” “Fire in the Bones: Reflections on African American Religious History,” “Canaan Land: A Religious History of African Americans,” “A Sorrowful Joy: A Spiritual Journey of an African-American Man in Late Twentieth-Century America,” and “American Prophets: Seven Religious Radicals and Their Struggle for Social Justice.” He co-edited two volumes, “African American Religion: Interpretive Essays in History and Culture,” with Timothy E. Fulop, and “Immigration and Religion in America: Comparative and Historical Perspectives,” with Richard Alba and Josh DeWind.

Raboteau, who was raised Catholic and converted to the Orthodox Church later in life, taught courses on many aspects of African American religious history and culture, bringing literature, music, and art to his students as vital sources for engaging this history. His other courses explored religion and social activism, Catholicism in America, and the religious dimensions of contemporary fiction.

Over the course of his career, Raboteau was honored with numerous awards, including four honorary doctorates and fellowships from the Guggenheim Foundation and the National Endowment for the Humanities.

Raboteau was predeceased by his father, Albert Jordy Raboteau; his mother, Mabel Ishem Raboteau; his stepfather, Royal Woods; and his sisters, Alice Warren and Marlene Raboteau.

A viewing will be held on Thursday, Sept. 23, from 6-9 p.m. at Mother of God Joy of All Who Sorrow Orthodox Church, 904 Cherry Hill Road, in Princeton, New Jersey. The Office of Burial will be held at the same church at 10 a.m. on Friday, Sept. 24. The ceremony is open to well-wishers and will also be streamed online. The burial will follow at Highland Cemetery, 95 Hopewell-Wertsville Road, in Hopewell, New Jersey. In-person attendees for all events are asked to wear masks in consideration of the health of all present.

In lieu of flowers, memorial donations may be made to Arm in Arm, formerly known as The Crisis Ministry, in Trenton, New Jersey, which can be contacted at arminarm.org or (609) 396-9355.