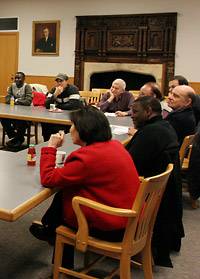 Home page photo: New faculty member Jennifer Widner, who studies comparative politics and law with a focus on Africa, talks with Jeffrey Herbst, chair of the politics department and specialist in African politics.

"Global awareness should be 'built into the DNA of Princeton,'" said President Tilghman at this year’s Opening Exercises, quoting a University trustee in her address to students. With recent high-level faculty appointments in international affairs and comparative politics and new globally focused courses and research projects, this "DNA" is being expressed in unprecedented ways at Princeton.

Two years ago when Anne-Marie Slaughter became dean of the Woodrow Wilson School of Public and International Affairs, she stated her goal to rebuild the school's strength in international affairs. A distinguished internationalist, Slaughter now is seeing the fruits of her efforts in the hiring of five new faculty members and four visiting professors, all within the past year.

This year also marks the first anniversary of the Princeton Institute for International and Regional Studies (PIIRS), which was formed by the University and the Wilson School to conduct multidisciplinary research and teaching on issues of global importance. Led by Latin American studies scholar Miguel Centeno, PIIRS includes approximately 100 faculty associates from a broad range of academic disciplines at Princeton.

In their efforts to boost international education at the University, Slaughter and Centeno explained why it is imperative for students to become knowledgeable about the wider world.

"Princeton students today live in a globalized, networked world," said Slaughter. "It is our job to give them the cultural competence — through courses, experiences and interactions with international students here at Princeton — to allow them to succeed and lead in that world."

"International knowledge is a little like literacy," said Centeno. "It's not a luxury. We have to guarantee the nation that all the students coming out of Princeton are globally literate."

Describing her vision for the Wilson School, Slaughter said it “should be the place where the best theoretical and empirical research is applied to the most important international problems facing the world today.” Slaughter sees the school as a leader in the study of globalization, international law, international relations, American foreign policy and national security strategy.

Four of the five key appointments were made jointly with the politics department and include Thomas Christensen, an expert on Chinese foreign policy and international security; John Ikenberry, a scholar of international relations theory, American foreign policy and international political economy; Helen Milner, an expert on trade and the impact of globalization on developed and developing countries; and Jennifer Widner, who studies comparative politics and law, with a focus on Africa.

During the recruitment process, Slaughter worked closely with politics department chair Jeffrey Herbst, who said “the fact that we were willing to make so many hires increased our probability of attracting each one of these excellent colleagues because they all wanted to go to an intellectually vibrant institution.”

The fifth key appointment is Robert Keohane, who studies issues of humanitarian intervention, anti-Americanism and global warming, and whom Slaughter calls the “leading international relations scholar of his generation.” Keohane will join the faculty in February, along with his wife Nannerl Keohane, the former president of Duke University. He will become professor of international affairs at the Wilson School and she will become the Laurance S. Rockefeller Distinguished Visiting Professor of Public Affairs and the University Center for Human Values.

Adding to this breadth of expertise are four one-year appointments, including Christopher Kojm, the former deputy executive director of the National Commission on Terrorist Attacks Upon the United States (also known as the 9/11 Commission); Hal Scott, a visiting professor from Harvard Law School who studies international finance; Daniel Tarullo, a law professor from Georgetown University who teaches international economic law; and Edmund Hull, the former ambassador to Yemen, who began his stay at Princeton in January. Both Hull and Kojm were at Princeton as students; Hull is a member of the class of 1971, and Kojm earned a master’s in public affairs from the Wilson School in 1979.

These appointments offer exceptional opportunities for collaborative work. For example, one key development slated for this academic year will be the establishment of a Center for Globalization and Governance, to be directed by Milner.

Widner, who said the strengths of Princeton’s politics department and Wilson School were a draw even before the latest appointments, asserts that there “is a sense that we can create an agenda and build on the momentum already established.” Busy making connections, Widner meets with colleagues from different departments weekly to discuss development policy issues in Africa.

Even after these appointments, the impetus to flesh out international studies at Princeton continues. Slaughter said that the Wilson School is hoping to fill a position in international law and an offer is out for an expert in science and security. Slaughter also said the school has “an urgent need” for a scholar of the Middle East and, more broadly, for Muslim studies. She also would like to add at least one more scholar of security studies and build expertise in the study of Russia and Japan.

“I often joke that I keep a 1-800 line next to my bed, to ensure that those scholars whom we are recruiting can reach me at any time and that I can reach out to them constantly to remind them what an extraordinary place Princeton is and how much they will miss out if they don’t join us,” said Slaughter.

Now in its second year, Centeno says that PIIRS is an established entity on campus that serves as an “umbrella” for many internationally focused endeavors for students and faculty.

One of the institute’s primary objectives is to expand the undergraduate curriculum to offer more courses with a global perspective. According to Centeno, PIIRS has funded or helped organize 30 new courses, whose content traverses the globe and covers topics such as Islamic history in South Asia, women’s speech in Francophone Africa, the Japanese financial system and relations between the United States and the European Union. Some of these courses came about by student request; for example, this year Hindi is being taught at Princeton for the first time.

Centeno says PIIRS has a “utilitarian” role to “identify and fill curricular holes.” To do this, PIIRS annually invites approximately 10 lecturers, visiting faculty members and postdoctoral scholars to the University.

The institute also sponsors various lecture series, conferences and panel discussions throughout the year. A major conference last year was on the “State of the World,” and an upcoming one will focus on the environmental effects of trade in agricultural commodities. Centeno estimates that PIIRS brings a guest speaker to Princeton every week.

Students also are encouraged to organize educational events through the institute’s Undergraduate Fellows Program, which includes 30 students. Currently, senior Federico Baradello is working with sophomore Glen Weyl to plan a speaker series that will bring Latin American leaders to Princeton.

“As an undergraduate fellow you have access to resources that allow you to plan events designed to expose more undergraduates to international issues of tremendous importance,” said Baradello. “As the world becomes more interdependent, issues traditionally viewed as ‘domestic’ really can be seen as part of a larger global picture,” he said.

PIIRS further supports students by providing funding for study abroad and international internships, and a goal is to offer summer fellowships for language study. Graduate students also may apply to PIIRS for funding for dissertation research and language study.

Describing himself as a “matchmaker,” Centeno said that a large part of his job is bringing faculty together to learn about each other’s research. Through collaboration supported by PIIRS, Centeno hopes that Princeton faculty members will continue to “take on the responsibility of working on scholarship that deals with the shape of the world.” According to Centeno, this scholarship needs to address large-scale concerns such as global inequality, disease and ethnic violence.

Supporting the study of international issues, PIIRS currently provides funding for up to 20 faculty research projects. These concern issues such as civil society initiatives for peace in India and Pakistan; water resources and the urban environment in Latin America and the Caribbean; comparative studies of international migration in Latin America; and a public opinion survey examining election patterns and political attitudes in Romania.

To ensure that knowledge from research is shared, Centeno stresses making connections across a global network of universities. He also states that Princeton must be an “advocate for keeping the United States a leader in higher education” by continuing to attract students and scholars from other countries. Centeno, who accompanied President Tilghman on a trip to Asia in November along with the deans of undergraduate and graduate admission, said the visit provided an especially valuable opportunity to increase awareness of Princeton around the world.

Read profiles of new faculty appointments in the Weekly Bulletin.