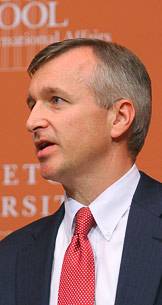 Thomas Christensen, a professor of politics and international affairs, recently returned to campus after serving for two years as U.S. deputy assistant secretary of state for East Asian and Pacific affairs. He drew on his scholarly expertise and diplomatic acumen during his time in the government, and now he is bringing those experiences from the State Department back to the classroom. Here, he delivered a public address on U.S.-China policy last fall in Dodds Auditorium, Robertson Hall. (Photo: Sameer Khan)

In teaching Princeton students about government service and foreign policy, Thomas Christensen brings fresh insights from his own efforts to help guide America's relations with China and its neighbors.

Christensen, a professor of politics and international affairs, returned to campus this past fall after serving for two years as U.S. deputy assistant secretary of state for East Asian and Pacific affairs, with responsibility for policy toward China, Taiwan and Mongolia. Whether putting in long days of negotiations in Beijing or helping to secure $280 million in U.S. aid to support development in Mongolia, Christensen drew on his scholarly expertise and diplomatic acumen during his time in the government. Now he is bringing those experiences from his State Department tenure back to the classroom, where this spring he is teaching an undergraduate course on Chinese foreign relations and a graduate seminar on international strategy.

"The opportunity was rewarding, intellectually stimulating and exciting, and I thought it was very important in terms of the responsibility of citizens to contribute to the policy process when asked to do so," Christensen said. "Additionally, I knew it would help me in my future teaching and scholarship."

After extensive consulting for the government, Christensen was appointed to his State Department post by President George W. Bush in 2006 and took a public service leave from his faculty positions in the Department of Politics and the Woodrow Wilson School of Public and International Affairs.

"In Professor Christensen we had one of the most well-informed and intelligent deputy assistant secretaries in the 100-year history of the East Asia bureau," said Christopher Hill, assistant secretary for East Asian and Pacific affairs in the Bush administration and the chief U.S. envoy to the six-party talks on North Korean nuclear proliferation. "The depth of his knowledge about China and the region, its leaders and their backgrounds, and the texture of the cultures involved was simply extraordinary."

A member of the Princeton faculty since 2003, Christensen's areas of focus include international security, China's foreign relations and the international relations of East Asia. Prior to being appointed deputy assistant secretary, his consulting work for the government included twice briefing Vice President Dick Cheney, and he was presented with a Distinguished Public Service Award by the State Department in 2002.

"Not only is Tom a terrifically nice guy, but he is a real China scholar, a real politics scholar, and he understands real foreign policy -- it is extraordinarily rare to find someone who excels in all three areas," said Shinn. "He understood more than anyone else, with very few exceptions, the complexity and intricacy of the Chinese decision-making process behind their policy. And, when it comes to foreign policy, success depends on how well you've inferred the motive and mechanics of the opposite side."

Christensen's willingness to serve in the government also struck to the core of the Wilson School's mission, Shinn added.

"Tom is a poster boy for what the Wilson School is engaged in -- training students and professionals for government service," he said. This includes not only undergraduate and graduate students, "but the professors as well, those who spend a couple of years in the policy process and then return to Princeton. ... We are all part of this serious engagement in the nation's service." 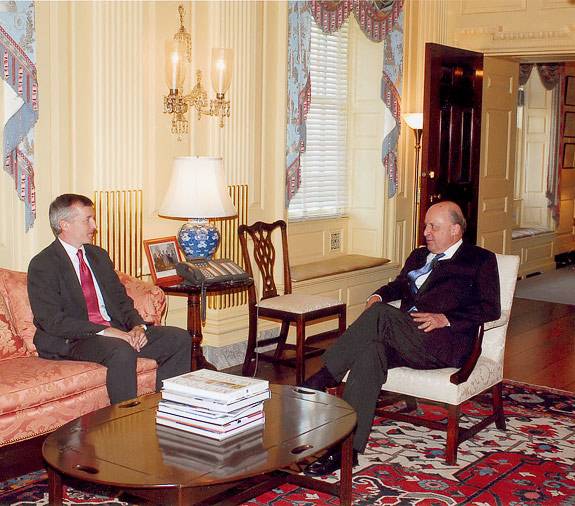 From campus to the capital

While taking the State Department position necessitated large personal sacrifices (Christensen's family remained in Princeton during his time in Washington), Christensen didn't hesitate when Hill approached him about the position.

Upon his arrival in the capital, Christensen's first order of business was to learn the inner workings of government, from the complex interagency process to the intricacies of the classified information system. He credits his colleagues with quickly bringing him up to speed and preparing him to take on the diverse challenges of his position.

"I had a lot of help early on from the people working for me," he said. "Foreign service officers are highly talented people -- they work extremely hard for their country, but often don't get the recognition they deserve. It was an absolute privilege and honor to work with them for two years."

Christensen's responsibilities as deputy assistant secretary included managing detailed aspects of U.S.-China relations on a daily basis and ensuring that public statements made by U.S. officials were consistent with U.S.-East Asia policy. His position also called on him to advise senior officials, including Deputy Secretary of State John Negroponte, prior to and during high-level dialogues with Beijing. In addition, as the top-ranking State Department official working specifically on China, he chaired meetings of China specialists from different U.S. government agencies to help maintain a cohesive approach to diplomacy toward that country.

Christensen said he is optimistic about the future of U.S.-China relations, noting there have been instances of real progress in recent years as the United States has encouraged China to take on a bigger share of the burden when it comes to international security and the global economy. He attributed these successes to progress in convincing the Chinese government that coordinating efforts to produce peace and stability in northeast Asia and elsewhere is in the mutual best interest of the United States and China.

"I think the effort is a long-term effort," he said. "We're nowhere near where we want to be, but the trend is moving in a positive direction." 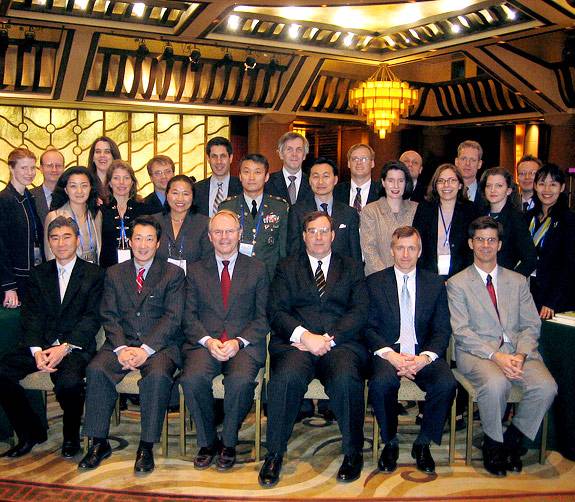 Christensen (front row seated, second from right) participated in the six-party talks on nuclear proliferation in Beijing in 2007. (Photo: Courtesy of Laura Rosenberger)

Christensen's two years in Washington, D.C., reaffirmed his longheld belief that an understanding of strategy and policy backed by sound theory is the best preparation for careers in government.

Christensen said he "didn't experience a huge culture shock at the State Department" because he was able to apply his political science training to his governmental responsibilities, such as his participation in negotiations on nuclear proliferation involving Russia, China, Japan, the United States, South Korea and North Korea.

His time in the government, working alongside people from diverse backgrounds, also supported his view that the best policy decisions are yielded by collaboration between international policy generalists and regional specialists. His pedagogical approach and the courses he teaches -- including a broad seminar on international security and specialized courses on China -- are testament to his convictions. Christensen also co-directs the Princeton-Harvard China and the World Program, which brings young scholars whose work bridges China studies and international relations together with recognized scholars in these fields.

In and out of the classroom, Christensen forges strong bonds with his students, often remaining in touch with them long after graduation and encouraging them to use their educations for the good of their country.

"Professor Christensen embodies the scholar-practitioner ideal, which is something that I aspire to achieve," said Danielle Cohen, a 2005 Princeton graduate who majored in the Wilson School and is now enrolled in Cornell University's Ph.D. program in government. She recalled hearing from Christensen in 2008 after he learned she had passed her international relations comprehensive exam: "I received a message from him at the State Department, congratulating me and reminding me to keep working hard because my country needs me."

During his time as deputy assistant secretary of state, Christensen crossed paths with multiple former students, including Richard Johnson, who earned his master's in public affairs from the Wilson School in 2006, and found himself reunited with Christensen just one week after starting a position as a foreign service officer in the State Department's Bureau of East Asian and Pacific Affairs.

"Tom really encouraged us to go into government service, so it was a great coincidence that Tom began his tenure as a deputy assistant secretary at the same time and in the same bureau where I had just started," Johnson said. "[He] was the same way as a deputy assistant secretary as he is as a professor -- accessible and engaged. ... Tom regularly interfaced with working-level staff on both a professional and a personal level."

"I was lucky to work with him as both a student and a colleague, and he has been a tremendous influence both academically and professionally in the diplomatic arena," Johnson said.