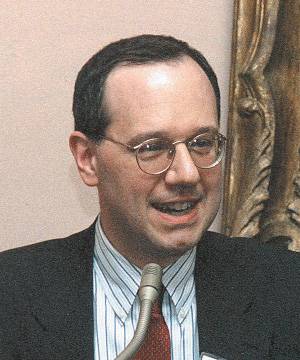 In June 2003, Professor Aaron Friedberg took a public service leave from the University to serve in Vice President Dick Cheney's office as a deputy national security adviser. Now he's back on campus, getting ready to teach a course this fall on "National Security Policy."

"I came back to Princeton because I believe that universities have a critical role to play in helping to address the challenges we face -- as centers of objective research, reasoned, civil debate and, above all, training for future generations of leaders and citizens," said Friedberg, a professor of politics and international affairs who joined the faculty in 1987.

"Especially at a time when the stakes are high, the problems complex and the 'right' answers far from obvious," he said, "it is important that students be exposed to a wide range of views on the issues of the day."

Friedberg recently was interviewed by staff from the Woodrow Wilson School's Office of External Affairs about his role in the vice president's office, current challenges to American and global security, and the focus of his research upon his return to the school.

What role did you play in the Office of the Vice President? Will you be able to bring this experience into the curriculum and the courses you'll be teaching this academic year?

At OVP my job title was deputy assistant to the vice president for national security affairs and director of policy planning. Because I didn't have a specific regional or functional portfolio I was able to get involved in a wide range of issues, including proliferation, the war on terrorism, policy toward Iran and North Korea, and relations with Russia and China and with our major allies in Europe and Asia.

My responsibility as a policy planner was to try to take the long view -- to think out a bit beyond the latest developments and pressing crises that necessarily occupy so much of the government's collective energy and attention. I learned a tremendous amount about specific issues, the policy-making process and the importance (and limitations) of intelligence. I also saw for myself just how hard it is to do meaningful mid- to long-range strategic planning. I expect that I will be mulling over my experiences for some time to come, and that they will shape my future research and, perhaps even more, my teaching, starting with "National Security Policy" this fall.

In general, I think we need to do more to prepare our students to think strategically -- not only to analyze problems and identify desired objectives, but to think through what is necessary to achieve them, especially in situations where others may be pursuing very different goals. During my time in Washington I kept thinking of [Prussian military thinker Carl von] Clausewitz's remark that war is "a contest of adversary wills." The same could be said of much of international politics and, for that matter, of the domestic policy process.

One of your books focused on America's Cold War strategy. How has America's grand strategy changed or evolved since the demise of the Soviet Union, especially in the context of the rise of China, the U.S. invasions of Afghanistan and Iraq, and in the face of new threats like global terror networks?

I found that there were a number of interesting parallels between the period that I examined in my book on the Cold War and the problems that we face today. In the 1940s and 1950s, the United States was confronted by new, unfamiliar and terrifying threats. After having defeated one set of enemies, the American people were plunged into a new era of insecurity; instead of feeling safer after the second World War they soon found themselves feeling even less safe. There were sharp, sometimes bitter domestic debates over how best to deal with the new threats -- it took some time for a rough consensus on national strategy to emerge.

In a relatively short period, the executive branch of the U.S. government was restructured and overhauled, with vast new agencies and new powers -- that process, too, took 10 or 15 years to work itself out. The early years of the Cold War were also a time when there appeared to be a sharp tension between the requirements of security and the necessity of preserving civil liberties and protecting individual freedom.

What's different today is that the most immediate threats are diffuse and hard to assess. We know that we face the danger of terrorist attack, including the possibility of attacks with weapons of mass destruction. But it is very hard to judge how imminent that threat is or how well we are doing in our efforts to minimize it.

It's also true that we don't have the luxury of focusing only on one set of strategic challenges. In addition to terrorism, we have to worry about the acquisition of weapons of mass destruction by irresponsible and aggressive states, and we also have to deal with profound, long-term shifts in the global distribution of wealth and power -- the rise of Asia and, in particular, of China.

The most immediate dangers in Asia are the problems posed by North Korea's relentless drive to acquire nuclear weapons, and the ever-present possibility of a conflict across the Taiwan Strait. Either one of those situations could blossom into a major crisis, and even a shooting war, at any time. Over the next several decades the rise of China will pose major strategic challenges. In the past it has often proved very difficult to incorporate fast-growing powers peacefully into an existing international system. The fact that China's economic and military capabilities are expanding so rapidly, while its political system remains repressive and authoritarian, is cause for concern.

What aspects of international security will you be researching upon returning to the Woodrow Wilson School?

Before I went into the government, I was working primarily on Asian strategic issues and I plan to continue with that line of research. I've also been doing some thinking and writing about the broader problems of American strategy: How can we better integrate our efforts to deal with the more immediate threats of terror and weapons of mass destruction with our longer-term concerns? How long is the era of American primacy likely to last, what could bring it to a close, and what should we do with the enormous margin of advantage in material power that we currently enjoy? What are the obstacles and difficulties confronting a national strategy that aims to promote the spread of democracy, in the Middle East and beyond, and how can these be overcome?

In what Woodrow Wilson School programs or initiatives will you be engaged this academic year?

I would like to see Princeton become even stronger and more active in the field of strategic or security studies. Princeton has a long tradition of scholarly excellence in this field extending back to before the U.S. entry into the second World War. In many ways the problems we face today are as urgent and complicated as they were then, or at the start of the Cold War.

In the two years that I've been gone we've added a number of outstanding new faculty with interests in this area and I know that Dean [Anne-Marie] Slaughter is deeply committed to building on what has already been accomplished. Princeton has many students and alumni who are deeply concerned with the problems of national and international security. We have a lot with which to work.