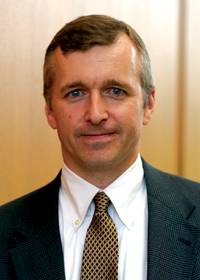 The White House and the U.S. State Department have selected Thomas J. Christensen, Princeton professor of politics and international affairs, as deputy assistant secretary of state for East Asian and Pacific affairs with responsibility for China, Taiwan and Mongolia. Pending the appropriate clearances, he is scheduled to assume the office this summer.

Christensen's research and teaching focus on international security, the international relations of East Asia and China's foreign relations. Before arriving at Princeton in 2003, he taught at Cornell University and the Massachusetts Institute of Technology. He has consulted often for the U.S. government, and in 2002 was presented with a Distinguished Public Service Award by the U.S. State Department.

Jointly appointed to the Woodrow Wilson School of Public and International Affairs and Princeton's politics department, Christensen would take a public service leave upon being confirmed and remain on the faculty.

"Simply as a citizen, I will sleep better knowing that Tom Christensen will have an important voice in shaping the nation's China policy over the next few years," commented Anne-Marie Slaughter, dean of the Woodrow Wilson School. "We will miss his contributions to the school as a teacher, colleague and friend. But we are proud that he has been selected for such a vital post, and we look forward to his return to campus upon the completion of his public service."

Other Woodrow Wilson School faculty who have taken public service leaves to join the U.S. government during the Bush administration include Professor of Politics and International Affairs Aaron Friedberg, who served as a deputy national security adviser to Vice President Dick Cheney from 2003 to 2005; Ambassador Robert Hutchings, who served as chair of the U.S. National Intelligence Council from 2003 to 2005; and recently appointed Federal Reserve Chair Ben Bernanke, who took a public service leave starting in 2002 to serve as a member of the Board of Governors of the Federal Reserve System and resigned from the faculty in 2005 to permanently join the government.

Christensen is the author of the book "Useful Adversaries: Grand Strategy, Domestic Mobilization and Sino-American Conflict, 1947-58" and has published numerous articles on U.S.-China relations and security issues in China and East Asia. He is the director of the China and the World Program at Princeton, a member of the board of directors of the National Committee on U.S.-China Relations and the recipient of several educational fellowships and grants for China and security studies.