In her research and teaching, Jennifer Widner, a professor of politics and international affairs, explores how developing states can build effective institutions. Widner directs the Institutions for Fragile States, a research initiative that focuses on issues related to institution-building in post-conflict settings and fragile states, primarily those in Africa.

On numerous research trips to Africa over the last 25 years, politics scholar Jennifer Widner discovered important dynamics of the societies she studied that could only be gleaned by being there.

She found, for example, that government employees' productivity in several countries wanes toward the end of every 30 days, because their monthly salaries are so low they are coming to work hungry. And she learned that in the rainy season a drive on a dirt road in Uganda that's supposed to take a couple of hours can last for 20.

To unearth those on-the-ground insights, Widner, a professor of politics and international affairs, has immersed herself and her students in African life through innovative programs that gather and analyze crucial information about building and operating institutions. Through these projects -- and in her teaching and scholarship -- Widner strives to see Africa up close, through the eyes of its own people.

Widner joined the Princeton faculty in 2004 with a joint appointment in the Department of Politics and the Woodrow Wilson School of Public and International Affairs. She has spent her career examining the problem of building accountable and effective institutions -- such as courts, local governments, police departments and even organizations to carry out garbage collection -- in countries where "reform leaders don't have much information," she said. " There aren’t the resources to go out and monitor field offices. There isn't petrol, there aren't roads, they don’t have e-mail, faxes or telephones, and it's very hard to manage something like police services or garbage collection or a civil service in these kinds of contexts -- yet this is becoming urgent to do."

In the classroom and in her own research, Widner engages these issues and others in African politics, exploring problems of democratization, development and the law with the goal of trying to make institutions in developing nations function more effectively. 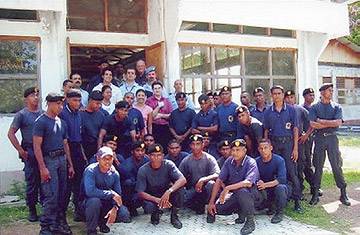 Through the Institutions for Fragile States, Widner is spearheading efforts to study the effectiveness of organizations in developing countries in Africa and elsewhere around the world. Participants in a policy workshop on "Measuring Police Performance in Post-Conflict Settings" met with members of the police force of Timor-Leste in Southeast Asia. (Photo: Courtesy of the Institutions for Fragile States)

Widner is spearheading several initiatives to study effective organizations in developing countries as director of the Institutions for Fragile States, a partnership of the Wilson School, Princeton's Bobst Center for Peace and Justice, and the National Academy for Public Administration. Its mission is to assemble practical and scholarly knowledge about institution-building in post-conflict settings and fragile states, primarily those in Africa.

In many fragile states, government performance improves after reforms go into effect. With few exceptions, however, these happy periods are short-lived, Widner noted. "One common trap arises when new leaders try to bring factions together by offering each control of a ministry as an incentive," she said. "When the ministries don’t deliver services well, public dissatisfaction grows, but efforts to move the factions out rekindle conflict.”

To address these challenges, the Institutions for Fragile States' researchers gather, analyze and deliver data to decision-makers using several approaches, including speaking with ex-government leaders and ministers to identify successful strategies.

Collaborating with Widner in these efforts are Daniel Scher, a 2006 alumnus who serves as associate director of the program, along with research specialists Rohan Mukherjee (who this month earned his master's degree in public affairs), Itumeleng Makgetla and Matt Devlin, and current Ph.D. candidates Graeme Blair and Sarah El-Kazaz. Through the program’s internship program, undergraduates are involved in aspects of the research as well.

The program also sponsors student policy workshops led by a practitioner -- someone at a nonprofit organization, for example -- who works on issues related to fragile nations. The workshops, each with a dozen Wilson School graduate students, set out to answer a question posed by a real-world client, such as the United Nations, the U.S. government or a not-for-profit institution. Two workshops are held each academic year.

A workshop last fall studied the difficulties of managing mineral, oil and gas resources in fragile nations by examining the situations in Azerbaijan and Gabon. Because countries with valuable natural resources often face widespread fraud and theft, an international oversight organization called the Extractive Industries Transparency Initiative (EITI) was established to police corruption. 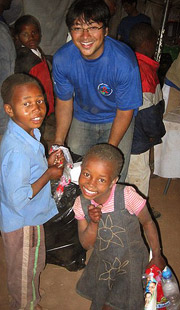 The students in the workshop spent 10 days in Africa assessing EITI's effectiveness. At the end of the semester, they presented their findings to Global Witness, a nonprofit organization that investigates the use of natural resources and that commissioned the students' research. Their report was posted on the Bobst Center website as a resource for others grappling with similar issues.

The workshops have proved to be formative experiences for the students.

"They learn what it takes to conduct a field mission and process information in a way that's useful to somebody on the ground," Widner said.

Malick Fall, who participated in the resources workshop, said the trip to Gabon afforded him unique access to decision-makers in the country.

"We had the opportunity to meet with high-ranking officials in the Gabonese government, the International Monetary Fund and the World Bank, and various civil society activists and journalists," he said. "The most surprising thing about the trip for me was the fact that government officials, who are generally very secretive, were actually willing to speak candidly with us."

The trip yielded critical information, said Fall, who just earned his master's degree in public affairs and is planning to work on development and public finance projects in emerging markets.

"We learned things about EITI and the government that we wouldn't have been able to had we not gone to Gabon," he said. "In doing this type of workshop, the field work is essential, as you get the chance to meet with the concerned parties directly and get the whole picture."

Widner said the workshop was received very favorably by the Extractive Minerals Transparency Initiative, an international body that addresses the kinds of problems the workshop addressed. In addition, EITI used the report as part of a recent assessment and asked to place the report on its website.

"The students are getting engaged in the kind of problems that are particularly challenging for fragile states, and they're doing research that other organizations don't have the time or resources to do," Widner said.

Widner's work on Institutions for Fragile States has been central to enhancing educational opportunities for Wilson School students who are interested in institution-building and political reform in the developing world, said Nolan McCarty, associate dean of the Wilson School.

"The graduate workshops and research opportunities generated by the program have been immensely valuable to our students," McCarty said. "But most importantly, the program is generating an invaluable information base aboutbest governance practices for the world's poorest and most vulnerable societies. It is exemplary of the important social contributions that the Wilson School hopes to make through its teaching and scholarship." 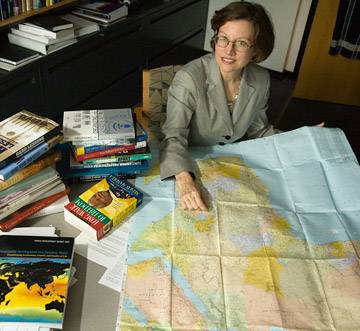 Widner, a Princeton faculty member since 2004, has been traveling to Africa to study local conditions in several countries since the 1980s. (Photo: Denise Applewhite)

Widner’s passion for getting students engaged in the issues faced by developing nations springs from her own deep involvement. She has conducted research in Botswana, Ivory Coast, Kenya, Tanzania and Uganda on the effectiveness of local government and court systems, among other projects -- sometimes spending up to a year living in a country to gain a true understanding of its dynamics.

But Widner’s academic career started in a much different place -- at Yale University’s School of Management.

After earning her bachelor’s degree from Harvard University, Widner enrolled in Yale’s international management program. She was interested in academia but felt, in the economic downturn of the early 1980s, that it made sense to pursue a business career, she said. To pay for her tuition, she worked summers at a bank in Philadelphia doing risk assessment for the bank’s investments in Sierra Leone and other African countries.

“I was working with field reports, and I was absolutely intrigued by what I read,” Widner said. She completed a master’s degree and then enrolled in the Ph.D. program in Yale’s political science department. After completing her dissertation in 1987, Widner taught for a year at Duke University before joining the faculty at Harvard, where she was promoted to associate professor after four years and spent seven years altogether. She taught at the University of Michigan for nine years before arriving at Princeton.

Beginning in her graduate school years, Widner has explored many subjects and encountered adventures in her research trips to Africa. In Uganda in 1996, she found her vehicle stuck in “industrial-strength adhesive clay, the likes of which I have never seen anywhere else,” a consequence of traveling during the rainy season, she said. Because banks were scarce, she was carrying the entire payroll for her research team, and she was passing through an area known for its bandits. Luckily, she reached her destination -- after many hours -- with the payroll intact. The incident highlighted how the lack of a highway infrastructure in Africa can stymie aid workers.

Widner has written about topics such as political liberalization in sub-Saharan Africa and building effective trust in the aftermath of conflict. Her 2001 book, “Building the Rule of Law,” was a study of the courts in Africa, told through the story of the chief justice of Tanzania, who at that time was the longest-serving chief justice in the world. The book laid out “the strategies judges can use to build autonomy from the politics of everyday life,” Widner said.

She currently is working on a book about constitution writing and conflict resolution. It is a cross-national study of the influence of drafting procedures on the levels of conflict in the years after new constitutions are negotiated.

In the classroom, Widner teaches graduate-level courses in development policy in Africa, comparative politics, and law and development. Her undergraduate course on African politics covers current policy issues as well as offering social and historical context.

That course gave junior Veda Sunassee “an overview of the major problems plaguing various parts of Africa and how African leaders and people react to those problems,” he said. “Equally important, we learned how the rest of the world reacts (if at all) to improve Africa’s situation.”

The course reading list combines academic works about the region with novels by African authors, which helped Sunassee understand the perspective of the countries’ citizens.

“Reading these novels sometimes made it a lot easier to understand certain attitudes and the reasoning behind some of the African leaders’ decisions,” he said. “As Professor Widner stressed at the beginning of the course, learning about Africa through the eyes of its own people does make (you) see things differently.”