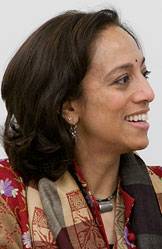 Princeton's Woodrow Wilson School of Public and International Affairs brings prominent public policy practitioners to campus each year through its "Leadership and Governance" program. Visitors deliver a public lecture, and meet informally with individuals or small groups of students and participate in classroom discussions. Kavita Ramdas, former president and CEO of the Global Fund for Women and current University trustee, joins a classroom discussion on global networks during her visit to Princeton in March.

During a class this fall on political economy and health systems in the Woodrow Wilson School of Public and International Affairs, Princeton senior Kara McKee found herself face-to-face with one of the architects of President Barack Obama's hotly debated health care reform plan -- former White House budget director Peter Orszag.

"When I raised my hand in class to ask a question challenging the validity of one of Dr. Orszag's assumptions, rather than hurriedly brushing off my more conservative logic, he engaged 100 percent and spent the next 10 minutes carefully explaining why he thought his argument was better," said McKee, who added that she was struck by Orszag's openness to different ideas.

Interactions such as these leave a major impression. While listening to a "sage on the stage" can be interesting, students also yearn for a chance to talk to high-level policymakers and other leaders on a much more intimate level. With this in mind, the Wilson School launched its "Leadership and Governance" program in 2009. Each academic year the program brings four to six prominent public policy practitioners to the Wilson School for up to three days, during which the visitor delivers a public lecture, meets informally with individuals or small groups of students and participates in various classroom discussions.

The result has been a more intense and hands-on learning experience than what students would gain from a single lecture.

"The caliber of policymakers we are able to bring to the campus is amazing," said Nolan McCarty, a Wilson School professor and associate dean who helped launch the program. "Whether over a meal, in one-on-one office-hour sessions or in seminar discussions, the students report feeling more connected to the policymaker than if they had simply heard him or her deliver a public lecture." 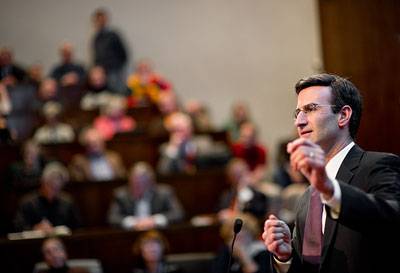 Peter Orszag, the former head of the Office of Management and Budget, discusses health care reform in a public lecture in November. Later he joined students in a classroom discussion in which he recounted his experiences as the Obama administration's budget chief. (Photo by Sameer Khan)

Kevin Smith, a master's in public affairs (MPA) candidate, said, "The chance to visit one-on-one with Peter Orszag is a case in point of the immense opportunities that are available to students at the Wilson School."

Smith, who had previously worked in the Washington, D.C., office of the Republican National Committee as well as Inez Deposit Bank in Kentucky, said Orszag imparted valuable insights from his tenure as head of the Office of Management and Budget (OMB).

"Coming from a political and business background, my conversation with Dr. Orszag centered on his role as director of OMB and the management skills and techniques he used to be successful," Smith said. "This dialogue helped me gain a further grasp of the responsibilities and duties of a government executive as I prepare myself for public service."

MPA student Renee Ho had a one-on-one meeting with Kavita Ramdas, former president and CEO of the Global Fund for Women, a nonprofit organization dedicated to advancing women's rights around the globe. Ho not only found Ramdas' work on women's rights and social justice remarkable, but said "Kavita, the person, is even more so inspiring because she is real and accessible. We were able to talk on a wholly personal level about what it's like being a woman working in some very male-dominated institutions and professions. She bridges the often contentious boundaries of cultural relativism and universalism with a unique finesse."

Dean Christina Paxson said, "This program has been a wonderful boon for the Woodrow Wilson School. Students and faculty appreciate the opportunity to learn from these policymakers in a more relaxed setting."

Offering a range of global perspectives

This academic year the Wilson School has hosted four Princeton alumni: Orszag, a 1991 Princeton graduate, who visited Nov. 9-10 as the Conor D. Reilly Visiting Practitioner in Leadership and Governance; Carter Roberts, a 1982 graduate and president and CEO of the World Wildlife Fund, who visited Dec. 13-15; Ramdas, a 1988 graduate alumna and current University trustee, who visited March 28-29; and Mark Quarterman, a 1987 graduate alumnus and senior adviser and director of the Post-Conflict Reconstruction Project at the Center for Strategic and International Studies, who visited April 11-13. Ramdas and Quarterman also are Wilson School alumni.

The visitors chose their public lecture topics, all drawing on their specific expertise and addressing a pressing policy issue of the day. Orszag, who had recently stepped down from the Obama administration, provided insight into the newly enacted health care reform legislation and prospects for implementation in light of the November elections, in which voter concern over the health care legislation had a major impact on the outcome of many congressional races.

Orszag remarked out that he did not believe that the 2010 elections would result in large pieces of the health bill being repealed. However, he thought that a likely outcome would be an effort led by the new Republican majority in the House of Representatives to simply "underfund" or "defund" implementation provisions contained in the law. Without outright repeal, he noted, the law would still take effect by default, but the lack of proper funding would create a hefty "unfunded mandate" for the states. 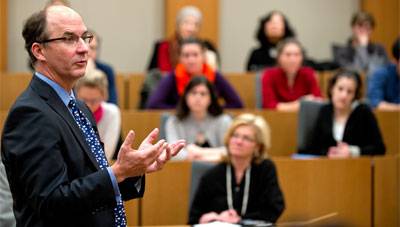 The president and CEO of the World Wildlife Fund, Carter Roberts, presents his vision for ideal public policy leadership during a public talk on campus in December. (Photo by Sameer Khan)

Roberts, who is involved in the conception and execution of cutting-edge, science-based conservation, described what he sees as the ideal for an emerging public policy leader -- one who is able to "connect the dots" and bring together civic, government and business leaders to craft a solution to an environmental problem. He challenged students to look beyond a single career path and to meld a career around business, government and the nongovernmental sector. "People who do that kind of research or design -- those careers are golden," he said.

Ramdas talked of the interconnectedness of the various challenges now facing the nations of the world. She noted that a key to overcoming these challenges is obtaining an education of a global nature to gain awareness of the profound inequalities in today's world, in particular gender inequality. Ramdas said one of the most effective development strategies for social is change is through "investing in women."

The last speaker in the series, Quarterman used recent actions by the United Nations Security Council in the conflict in Libya as an example of the importance of multilateralism. But he was also quick to point out that the world is still learning how to conduct multilateral politics, which can frustrate both practitioners and casual observers.

Bringing real-world insights to the classroom

Beyond their public presentations the policy leaders participated in classroom discussions that were matched with their areas of expertise.

One of the classes Orszag visited was "The Political Economy of Health Systems" led by Professor Uwe Reinhardt. Roberts joined Professor David Wilcove's research group for a discussion on the role of science in a conservation nongovernmental organization and also talked with students in Professor Stanley Katz's class on "Civil Society and Public Policy." Ramdas spoke in the policy analysis class led by Professor Anne-Marie Slaughter on "Making Networks Work." And Quarterman joined Professor Jennifer Widner's "Making Government Work in Fragile States" classroom discussion, among others.

Following the classroom discussion with Orszag, McKee said she was struck by his "unique ability to take complicated economic concepts and make them simple and relevant."

McKee, who is an economics major, said, "What impressed me the most was his ability to talk about economics and economic policy in a way that was clear and meaningful to non-Ph.D.'s."

After Roberts spoke with his research group, Wilcove said, "Carter offered a firsthand perspective on how environmental policy is formulated, both domestically and internationally. His insights and his candor were remarkable, and I think he opened the eyes of a lot of people to the rewards and challenges of a career devoted to public service."

Katz said of Roberts' visit to his class, "The timing was perfect, since the topic for that week was 'Global Civil Society,' and the World Wildlife Fund is a classic example of a global nongovernmental organization." 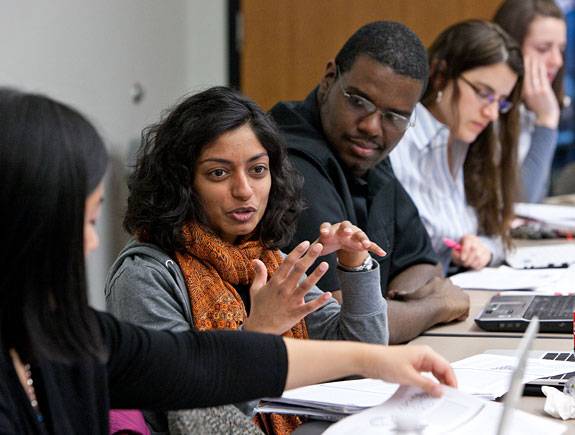 During the visit by Ramdas to Professor Anne-Marie Slaughter's course on "Making Networks Work," students engage in a discussion about the role of networks in bringing about nonviolent change in the Middle East. (Photo by Denise Applewhite)

In Slaughter's class, Ramdas joined students in examining the role of networks in bringing about nonviolent change in the Middle East. Ramdas went on to explore how different social movements forge links with one another -- using the example of how agricultural groups in developing countries are networking with groups concerned about environmental degradation to bring about change that will increase agricultural production while limiting problems such as deforestation. 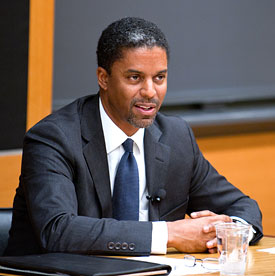 Mark Quarterman, who directs the Post-Conflict Reconstruction Project at the Center for Strategic and International Studies, talks about the importance of multilateralism in an April lecture. (Photo by Sameer Khan)

Beyond the public lectures and class discussions, the individual, informal interactions with the visitors have provided students with opportunities to ask detailed and direct questions.

After meeting with Roberts, MPA student Clare Sierawski said, "It was incredibly generous of him to spend time in Princeton and meet with students one-on-one. He has extremely rich experiences working on a variety of environmental issues and has some very interesting insights and approaches. I was also impressed with his palpable commitment to finding solutions to the environmental challenges we face -- it is rare to meet someone who is so strongly dedicated to making this world a better place."

MPA candidate Elie Teichman said his meeting with Quarterman was helpful in addressing questions about his own career path.

"This interface was particularly valuable because of his candid advice on a range of issues that we are likely to confront during our careers," Teichman said. "The ability to draw off personal experience made the advice he offered more compelling as it will shape how I will approach my work at the Wilson School and beyond."