Students selected for Princeton's Scholars in the Nation's Service Initiative are gaining experience working with U.S. government agencies in Washington, D.C., and around the world to prepare for potential careers in federal service. Senior Michael Konialian, shown here in the diplomatic lobby at the State Department in Washington, worked this summer as an intern in the office of Nina Federoff, science adviser to U.S. Secretary of State Condoleezza Rice, where he helped organize a fellowship program to help foster entrepreneurship and combat unemployment in the Middle East. (Photo: Lawrence Lin)

From the role of science in diplomacy to disease control in Tanzania to agricultural trade issues in Russia, Princeton students interested in federal service careers are learning firsthand the myriad issues facing the U.S. government around the world.

Fifteen undergraduate and graduate students selected for Princeton's Scholars in the Nation's Service Initiative (SINSI) -- launched in 2006 by the Woodrow Wilson School of Public and International Affairs -- are gaining experience working with U.S. government agencies in Washington, D.C., and around the world to prepare for potential careers in federal service. The program's focus on classroom and workplace training is helping them to better understand how the U.S. government operates and to discover paths to service in their fields of choice.

Kimberly Bonner, who graduated from Princeton this spring, worked prior to her senior year as a summer intern in the State Department's Office of International Health and Biodefense, focusing on infectious disease issues. This August she began a two-year position in Dar Es Salaam, Tanzania, with the President's Malaria Initiative, a program of the U.S. Agency for International Development (USAID) aimed at reducing deaths due to malaria in Africa.

"SINSI has given me the incredible opportunity to take a great job with the federal government right out of college," said Bonner, who was a molecular biology major. "It is allowing me to gain experience in the implementation of health initiatives without straining the often slender resources of these programs. I hope to work for the federal government again after completing the SINSI initiative, hopefully in the area of global health."

The initiative's undergraduate program is open to Princeton juniors studying any discipline, while the graduate program is open to applicants to the Wilson School's master in public affairs (MPA) program. Undergraduates selected for the program spend their final three semesters in college completing their majors, taking selected courses in public policy, learning about career opportunities in the federal government and spending the summer after their junior year in a federal government internship. After graduation, these students and those accepted into the program at the graduate level are known as Charles and Marie Robertson Government Service Scholars. In addition to completing the two-year MPA program, Robertson Scholars are placed in two-year fellowships in the federal government and are eligible for extended language training programs as well.

The Wilson School and the Partnership for Public Service, a Washington-based nonprofit organization, work with the selected scholars to match their skills with work in the federal government. 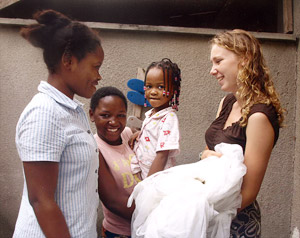 Recent graduate Kimberly Bonner (right, with members of the Kaspar family, her hosts in Tanzania) recently began a two-year position in Dar Es Salaam, Tanzania, with the President's Malaria Initiative, a program of the U.S. Agency for International Development. Her work includes developing a database for a campaign to distribute free bed nets to every child under 5 in the country to help diminish the spread of malaria. (Photo: Courtesy of Kimberly Bonner)

"I am enormously proud of the SINSI program. The individual students are stars, and their motivation and determination to serve is inspiring," said Anne-Marie Slaughter, dean of the Wilson School. "They have gotten jobs that I would have jumped at when I was an undergraduate. The opportunity for them to see some of the best of what the federal government does but also to see some of the problems the government has firsthand is invaluable in terms of their own careers and in terms of building constituencies for change."

SINSI director Barbara Bodine, a former U.S. ambassador and career senior Foreign Service officer and a diplomat-in-residence at the Wilson School, said the program not only provides the students with work experience and contacts within government, "it also gives a positive affirmation that federal career service is a path to be aspired to -- this is an option that more students should consider and the University feels is important. Students find that there is a real sense of service, of being able to take their considerable talents and their considerable skills and put them to tasks that are both intellectually challenging and have a purpose beyond themselves."

Bodine added, "If you look at the current presidential campaign, both candidates stress in their own vernaculars a need for Americans to recommit to government service. This initiative reflects and reinforces this new commitment to careers in government service."

Senior Michael Konialian's internship this summer in the office of Nina Federoff, science adviser to U.S. Secretary of State Condoleezza Rice, provided him with insights into "the many tools of diplomacy, of which science is only one, available to help America achieve its goals in the world."

Konialian's main focus was on an initiative led by Federoff's office to start a fellowship program for Middle Eastern college graduates with degrees in science or technology to work for a year at U.S. technology firms, with the goal of fostering entrepreneurship and combating unemployment in the region. He coordinated efforts among governmental agencies, nongovernmental organizations and the business community and wrote the grant proposal for the program, which the State Department agreed to fund.

Through this experience, he has "realized the importance of being a policy entrepreneur in order to make an impact in Washington. I have found that it is crucial to take an active role in the process of transforming ideas into working policies. Furthermore, I have learned that coalition building is a necessity in both the crafting and effectuation of policy because of the many checks built into the American government."

After graduation, the mechanical and aerospace engineering major hopes to return to the State Department or work at the White House or in Congress on policy issues at the intersection of science and policy, such as climate change, nonproliferation of weapons of mass destruction, alternative energy development or the space program.

For some SINSI students, their placements help them gain firsthand perspective on the work of the U.S. government overseas. Bonner's position with USAID involves working with a Tanzanian government agency to create a database for tracking the distribution of free bed nets to every child under 5, a campaign to reduce the spread of malaria in the country. She also will collaborate with the Centers for Disease Control and Prevention to establish surveillance sites for gathering data on malaria deaths and illnesses to assess the effectiveness of policies implemented through the President's Malaria Initiative.

"Not only will I get the opportunity to see how USAID functions, but I can learn how stakeholders like the Tanzanian government (through its National Malaria Control Program) implement policies," she said. 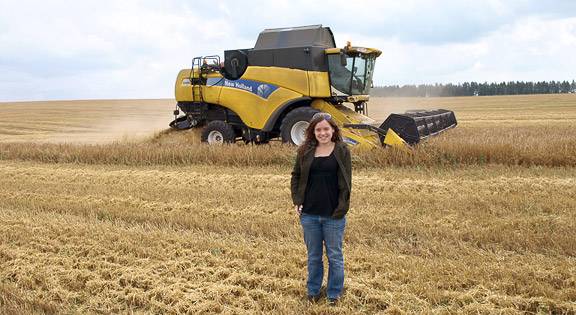 As an intern this summer in Moscow with the U.S. Department of Agriculture's Foreign Agricultural Service, senior Cynthia Barmore worked on agricultural trade issues involving the United States and Russia. She also traveled to rural areas south of Moscow to learn more about the state of Russian agriculture. (Photo: Allan Mustard)

Senior Cynthia Barmore was an intern this summer in Moscow with the U.S. Department of Agriculture's Foreign Agricultural Service. Her duties included editing, researching and writing reports related to U.S.-Russia agricultural trade as well as reports on the emerging organics market in Russia and on the political, economic and agricultural situations in Georgia and Armenia. She also took a weeklong trip with colleagues through rural areas south of Moscow to learn more about the state of Russian agriculture.

Barmore, a Wilson School major, ultimately would like to work on food aid issues with the U.S. Mission to the United Nations Food Agencies in Rome, which is part of global efforts to promote sustainable development and combat hunger.

"Food aid can help extremely desperate people. It can also potentially hurt certain groups, change international relationships and affect the long-term sustainability of agriculture in the recipient country. Working in this field would be extremely rewarding," she said.

Jordan Reimer, a 2007 graduate in politics, continued his Arabic studies at the Yemen College for Middle Eastern Studies this summer, sponsored by SINSI, in preparation for his two-year placement on the Defense Department's Iraq desk starting in mid-September.

Last summer, Reimer worked on the State Department's Iran desk, handling projects including public opinion polls and cataloging U.S.-Iran diplomatic messages since the Iranian revolution of 1979. With the Defense Department, Reimer will work in Washington with the team that oversees Iraq's political development in his first year and may be sent to Iraq for his second year.

"Iraq is currently in a precarious situation, balancing the interests of its neighbors, and I appreciate the opportunity to be at ground zero for determining how the situation could develop to bring both peace and stability in the interests of Iraq, the region as a whole and the U.S.," he said. "I hope to come away with a firsthand understanding as to how foreign policy is made, developed and implemented in this country."

Shannon Brink, a senior majoring in the Wilson School, spent this summer in Washington as an intern with the Millennium Challenge Corporation, a government agency that aims to reduce global poverty. After graduation, she hopes to join the USAID mission in Lima, Peru, a country where she already has conducted service work through Engineers Without Borders at Princeton.

Brink is focused on developing skills through her government experience and future graduate studies to help her "work for sustainable, environmentally conscious policies that promote economic, political and social development throughout the world, but particularly in Latin America, where extreme inequality retards economic growth."

"I'm hoping to pursue a joint MPA/JD with the objective of developing the tools I need to address development challenges at every level -- from working with a Nicaraguan community to develop a sustainable solar energy project to analyzing the legal, economic and social ramifications of free trade legislation," she said.

Alexander Correa, who graduated this spring with degrees in economics and international studies from the University of Miami, became aware of SINSI through his participation last year in the Wilson School's Junior Summer Institute, a program that prepares students for graduate study and careers in public policy and international affairs.

Correa will begin his graduate studies at Princeton after two years in Washington with the Department of Treasury's Office of International Affairs, where beginning this fall he will assist senior department officials in developing and implementing U.S. international economic policies. His interest is in U.S. economic relations with Latin America.

"At Treasury I will gain a practical knowledge of how U.S. international economic policy is devised and executed, along with a deep familiarity with the pressing issues facing the world's economy today," Correa said. "I am sure that combining this experience with a master's degree from the Woodrow Wilson School that specializes in this field will give me the tools necessary to succeed at the highest levels of government."