by Cass Cliatt and Ushma Patel

Freshman Esther Clovis (seated front) celebrated Tuesday with the crowd in the TV lounge of the Frist Campus Center after President Barack Obama took the oath of office. A first-generation American, Clovis said Obama's election reflects that America is a land of opportunity. More than 300 students gathered in the lounge to watch the ceremony. (Photo: Denise Applewhite)

Princetonians have roles in transition, administration

View a video of the inauguration panel discussion at Robertson Hall. 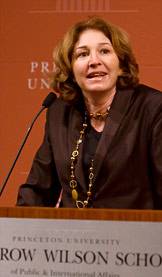 Anne-Marie Slaughter, dean of the Woodrow Wilson School of Public and International Affairs, introduced the panel discussion in Dodds Auditorium of Robertson Hall and added a few of her own observations. (Photo: Brian Wilson)

Freshman Esther Clovis said she has two male role models in her life: her father and Barack Obama. Both men have endured hardships and possess great work ethics.

On Tuesday, the inauguration of Obama as president showed her that persistence and hard work can pay off, and that the American dream can belong to her family too.

"It makes me realize once again how blessed I am to have the opportunities I have," said Clovis, whose parents came to the United States from Haiti 30 years ago. "My father drives a taxi, I am a first-generation American and first-generation going to college, and when President Obama talked about the economic struggles we're all going through, it just put everything into perspective. When I look at the opportunities that Barack Obama has had, he is definitely the American dream." 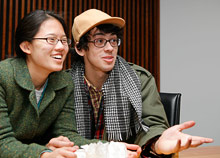 Clovis was among hundreds of students, staff, faculty and local residents who flocked to viewing parties across the University to watch the inauguration of the 44th U.S. president and the first African American chief executive.

A standing-room-only crowd of more than 300 students packed the TV lounge at the Frist Campus Center with other groups scattered throughout the building, while Dodds Auditorium in Robertson Hall hosted a panel discussion, viewing and reception for a capacity audience that spilled into several overflow rooms.

The viewings were punctuated by rounds of applause, laughter and cheers from the energetic crowds celebrating the historic moment.

Derrick Glover took time out of his work for University Services at Frist to watch the inauguration at a viewing organized by the Princetonians of Color Network in Frist Multipurpose Room A, even though Glover said he was recording the event at home for his 7-year-old son.

"I sent my son to school, but I taped it so when he gets home, we can watch it together," Glover said. "(Obama) gives a sense of hope that kids of the future can do anything, especially things (people) told me as a kid would never happen."

In the Frist TV lounge, freshman Maraiya Hakeem said she couldn't help but think of the generations of African Americans who came before her while watching Obama take the oath of office.

"When he said we have overcome racial lines and we need to keep moving forward, I was thinking of my great-grandmother who is 95 and watching today in Youngtown, Ohio. I know she didn't think she would live to see it."

John Kolligian, director of Counseling and Psychological Services in University Health Services, also watching at Frist, said he felt drawn to be with others during the inauguration because Obama's election has been "an incredibly bonding experience for our country and anyone who cares about the state of our world." 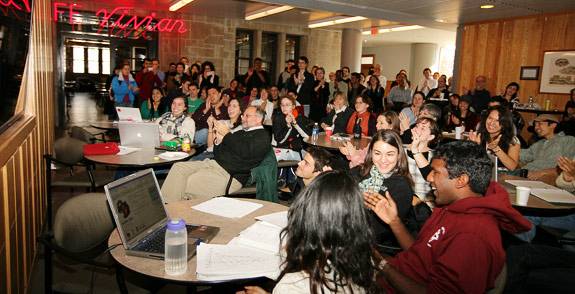 A crowd of students, faculty and staff in the Frist Campus Center applauded with approval as Obama outlined a message of change in his inauguration speech. (Photo: Denise Applewhite)

The event, sponsored by the Wilson School, Center for the Study of Democratic Politics and Office of Community and Regional Affairs, focused on Obama's place in history, as well as the good will he engenders and hope that he projects in the United States and throughout the world.

"Barack Obama's inauguration helps remind us of the world of opportunity in America," Canes-Wrone said. "We begin Obama's presidency with a sense of change and, perhaps more importantly, with a sense that our nation continues to make real progress in terms of offering equal opportunity for all of our citizens. "

From left, faculty members Brandice Canes-Wrone, Nolan McCarty and James Leach participated in the panel discussion in Dodds Auditorium, commenting on the historic nature of Obama’s presidency and the widespread support he is attracting in the United States and abroad. They then joined the crowd in watching the festivities. (Photo: Brian Wilson)

The audience, a mix of members of the community and University students, faculty and staff, participated fully in the inauguration as if they were in the crowd on the National Mall, standing when Obama first arrived on the Capitol steps and cheering after certain lines of his speech.

Brenda Cohen, a Princeton borough resident, said she was surprised by the sense of community she felt with the strangers she joined in watching the proceedings. Though Cohen did not support Obama until late in the election season, she was hopeful about his presidency.

"The speech was excellent and nothing less than I expected, because he's very erudite, " she said. "He's open and not threatened by intelligence and knowledge."

At the other end of the spectrum, Louise Ragin was an ardent Obama supporter who had planned to go to Washington, D.C., for the inauguration but changed her mind at the last minute because of the weather and logistics. Ragin, a retired nurse from Lawrenceville, proudly wore a T-shirt with a likeness of Obama and the phrase "44th president." 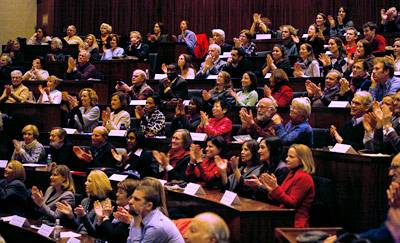 The capacity audience in Dodds Auditorium cheered at the first sight of Obama and at many stirring moments. (Photo: Brian Wilson)

"Everyone is unified, celebrating the new," Ragin said. "Everyone is anticipating this changing of the guard and a new direction for America."

Even after the ceremony was over, seniors Candice Chow and Julio May-Gamboa continued to watch the C-SPAN coverage in a Robertson Hall simulcast room as Obama signed his first proclamation. May-Gamboa was impressed by the grandeur and history of the moment, and also was anxious to see how Obama would follow through on the rhetoric in his speech.

"The part I liked most was about America having a set of values that needs to carry us through, and that the solutions are based on these principles," May-Gamboa said. "I hope that we can work on issues without being caught up in party politics and compromising to get things done."

Already, Obama is making an impact around the world, said Tanushree Isaacman. Isaacman, watching the festivities with her husband, engineering doctoral candidate Sibren Isaacman, spent two years in Nicaragua with the Peace Corps and is now pursuing a master's in international affairs at The New School in New York City.

"Obama is adopting the presidency at such a crucial time," she said. "With the way the U.S. is looked upon around the world and the economy, it can only get better."

Princetonians have roles in transition, administration

First Lady Michelle Obama, a member of Princeton's class of 1985, is perhaps the most recognizable alumna in the new administration.

At Tuesday's inauguration, many Tigers were excited when they noticed that her brother Craig Robinson, a member of the class of 1983, was wearing a black and orange scarf -- although it was noted that Oregon State, where he coaches basketball, claims the same colors.

Many other University alumni as well as several faculty members have had roles within the Obama-Biden Transition Project and are taking on responsibilities within the Obama administration. It is expected that several others will be announced in the coming weeks.

Those known now include: