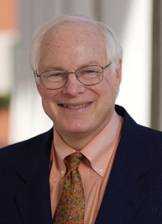 NOTE: Leach's appointment was confirmed by the U.S. Senate on Aug. 7.

President Barack Obama has announced that he intends to nominate Jim Leach, a 1964 Princeton alumnus and current faculty member in the University's Woodrow Wilson School of Public and International Affairs, to chair the National Endowment for the Humanities.

Leach, a former 15-term Republican Congressman representing Iowa, is the John L. Weinberg/Goldman Sachs & Co. Visiting Professor in the Wilson School. He also served as a member of Princeton's Board of Trustees from 2002 to 2006.

The National Endowment for the Humanities is an independent grant-making agency of the U.S. government dedicated to supporting research, education, preservation and public programs in the humanities. Leach's nomination will require confirmation by the U.S. Senate.

Leach joined the Wilson School faculty in 2007. A career public servant, he served in the U.S. Congress from 1977 to 2007, where his accomplishments and initiatives included chairing the House Banking Committee and the Subcommittee on East Asian and Pacific Affairs and co-founding the Congressional Humanities Caucus. In 2005 the National Humanities Alliance, a nonprofit organization, honored him with its Sidney R. Yates Award for Distinguished Public Service to the Humanities.

Leach endorsed then-Sen. Obama during the 2008 presidential campaign and was a keynote speaker at the Democratic National Convention in Denver. Leach later represented President-elect Obama in November 2008 at the G-20 summit of the world's largest economies.

"I am confident that with Jim as its head, the National Endowment for the Humanities will continue on its vital mission of supporting the humanities and giving the American public access to the rich resources of our culture," Obama said in a statement. "Jim is a valued and dedicated public servant, and I look forward to working with him in the months and years ahead."

Leach began his public service career in 1965 as a staffer to then-Congressman Donald Rumsfeld, a member of Princeton's class of 1954. In 1968 Leach joined the U.S. State Department as a Foreign Service officer, and resigned in protest in 1973 when President Richard Nixon fired the first Watergate special prosecutor Archibald Cox.

"We at the school are delighted and proud that President Obama has nominated Jim to lead the NEH," said Mark Watson, interim dean of the Wilson School. "He has been an enthusiastic and well-liked teacher and mentor to our students, an engaged member of the University community and a fine example of Princeton's commitment to public service."

Leach earned his A.B. in political science with honors from Princeton in 1964, and in 1966 received a master's degree from Johns Hopkins University, where he studied Soviet politics. From 1966 to 1968 he was a research student at the London School of Economics. Leach has received seven honorary degrees, has been decorated by two governments, and is the recipient of the Wayne Morse Integrity in Politics Award, named for the late U.S. senator from Oregon.