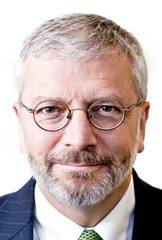 Joshua Bolten, a White House chief of staff to President George W. Bush and a 1976 graduate of Princeton, will join the faculty of the University's Woodrow Wilson School of Public and International Affairs for the 2009-10 academic year.

Effective Sept. 1, Bolten will be the Woodrow Wilson School's John L. Weinberg/Goldman Sachs & Co. Visiting Professor. Bolten will teach an undergraduate course on the federal budget during the fall semester. During the spring semester he will teach two graduate seminars, likely in the areas of the politics and practice of international trade and international financial regulation.

Bolten, 54, worked for eight years in the White House under Bush, beginning in January 2001 as deputy chief of staff for policy. Upon confirmation by the U.S. Senate in June 2003, Bolten joined the president's cabinet as director of the Office of Management and Budget (OMB). From April 2006 through January 2009 he served as White House chief of staff.

"We are pleased to welcome Josh back to Princeton this academic year," said Christina Paxson, dean of the Woodrow Wilson School. "His experience in government, particularly as White House chief of staff and as head of OMB, and his knowledge of aid and trade will prove invaluable for students as they prepare for their own careers in public and international affairs. In addition, Josh's commitment to a career in public service serves as a fine example to our students."

"I'm excited to follow my government career in a vibrant academic environment that's on the cutting edge of contemporary public policy thought," Bolten said. "And I'm especially pleased to have the privilege of doing so back home at Princeton's Woodrow Wilson School."

For the two years prior to joining the White House staff, Bolten was policy director of Bush's presidential campaign. For five years prior to that, he was executive director for legal and governmental affairs for Goldman Sachs International in London.

Bolten also served all four years in the administration of President George H.W. Bush from 1989 to 1993, most of that time as general counsel to the U.S. trade representative. From 1985 to 1989 he was a chief international trade staffer to the U.S. Senate Finance Committee. Previously, Bolten was in private practice with the law firm O'Melveny & Myers, and he served as an attorney in the U.S. State Department's legal office.

A native of Washington, D.C., Bolten earned his A.B. from Princeton, majoring in the Woodrow Wilson School, and received his J.D. from Stanford Law School in 1980. Immediately after law school, he served as a law clerk at the U.S. District Court in San Francisco.

Bolten also taught international trade at Yale Law School in the fall of 1993.