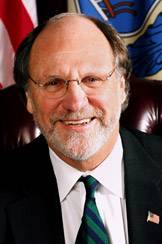 Corzine will hold a one-year appointment in the Wilson School for the 2010-11 year, leading a public lecture series on financial market regulation in the fall and teaching a graduate course on issues related to state policy in the spring.

"I couldn’t be more pleased that Jon Corzine will visit the Woodrow Wilson School next year," Wilson School Dean Christina Paxson said. "His experiences -- as a governor, a senator and in the world of finance -- give him a unique perspective on the interplay between federal and state policy, and between the public and private sectors."

Students, faculty and visitors will have an opportunity to engage with Corzine on current issues of state and national concern, Paxson added.

"The colloquium that he will lead on financial market regulation will bring experts to Princeton to give public lectures on some of the difficult issues we're facing in this area," she said. "I expect that this colloquium will attract a wide range of students, as well as other members of the broader Princeton community."

Corzine said he is excited by the opportunity to join the outstanding community of teachers and scholars at the Wilson School.

"Princeton offers uncommon ground for a thoughtful and informed dialogue on public policy questions that touch all of our lives, and I look forward to being actively engaged in that conversation," Corzine said.

Corzine served as governor from 2006 to 2010 and as a U.S. senator representing New Jersey from 2001 until 2006. While governor, Corzine was an ex officio member of Princeton's Board of Trustees, a position held by each sitting governor of New Jersey.

Prior to his time in public office, Corzine was chairman and CEO of Goldman Sachs & Co., where he oversaw the conversion of the investment firm from a private partnership to a publicly traded corporation. Corzine also served under President Bill Clinton as chairman of a presidential commission studying ways to increase federal investment in schools, infrastructure and technology.

Corzine's appointment as visiting professor becomes effective Sept. 1, 2010. John L. Weinberg, a 1947 alumnus, established the endowed professorship in 1991 with Goldman Sachs & Co. in honor of Weinberg's retirement as chairman and senior partner. The professorship supports bringing distinguished visitors in the areas of economics and public policy to the Wilson School.