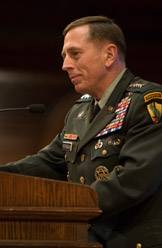 U.S. Army Gen. David Petraeus was given the James Madison Medal at Alumni Day on Saturday, Feb. 20, and, along with Woodrow Wilson Award winner Jim Leach, offered a blueprint for tackling critical issues facing the country today. In his address, Petraeus focused on the qualities needed for successful strategic leadership. The Madison Medal is presented each year to a graduate alumnus or alumna who has had a distinguished career, advanced the cause of graduate education or achieved an outstanding record of public service.

Petraeus, who oversees the wars in Iraq and Afghanistan as commander of the U.S. Central Command, was presented with the James Madison Medal, the University's top honor for graduate alumni. Leach, a longtime former U.S. congressman, was given the Woodrow Wilson Award, the highest honor for undergraduate alumni. After Petraeus and Leach delivered addresses in Richardson Auditorium, Alexander Hall, they received their awards at the Alumni Day luncheon in Jadwin Gymnasium, at which the University also recognized the winners of its highest student honors.

In their remarks, Petraeus and Leach each offered a blueprint for tackling critical issues facing the country today.

Petraeus, who earned his master's in public affairs and a Ph.D. from the Woodrow Wilson School of Public and International Affairs in 1985 and 1987, respectively, is renowned both as a military leader and public intellectual. He emphasized the qualities needed for successful strategic leadership -- developing big ideas, effectively communicating and implementing those ideas, and learning from best and worst practices. While he applied those examples to his experience with the military campaigns in Iraq and Afghanistan, Petraeus underscored that such qualities were keys to success in any endeavor.

"This wonderful university does a superb job of equipping its graduates with the skills, knowledge and attributes needed in those who may someday in the future exercise strategic leadership," he said to an audience of Princeton alumni and their families, students, faculty and administrators. "We face numerous challenges at home and abroad as we embark on a new decade and -- whether here in the United States, or in Afghanistan or Iraq -- we need strategic leaders who can work with partners to help chart the proper course." 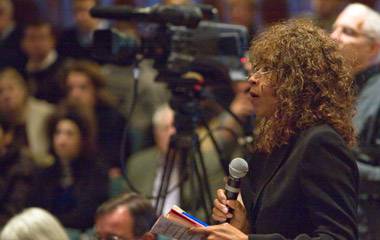 Denise Burgess, a 1984 alumna, asked a question following Petraeus' address. Petraeus and Leach received their awards at the Alumni Day luncheon after their morning talks.

Referring to the 2007 surge of U.S. troops in Iraq, Petraeus said, "The truth is that the surge of ideas was even more important than the surge of forces, though clearly the increase in forces enabled us to implement the big ideas much more rapidly than otherwise might have been the case."

As the United States now intensifies its military efforts in Afghanistan, Petraeus warned that violence and casualties will increase. But he said the U.S. commitment to the necessary troop levels, diplomatic resources and organizational structure will strengthen its position in the fight against the Taliban.

People ask if he is optimistic or pessimistic; Petraeus said he is "realistic."

Leach, who earned his A.B. in politics with honors from Princeton in 1964, began a four-year term in August as chair of the National Endowment for the Humanities, an independent grant-making agency of the U.S. government dedicated to supporting research, education, preservation and public programs in the humanities.

In his 15 terms as a Republican congressman representing Iowa, Leach was known for his efforts to reach across partisan lines in policymaking. During his Alumni Day address, he expressed frustration with today's rancorous political discourse and called for a return to civility. 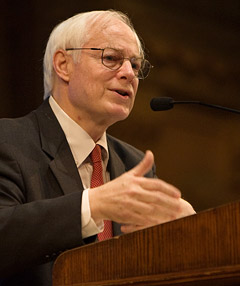 National Endowment for the Humanities Chair Leach received the Woodrow Wilson Award, which is bestowed annually upon an undergraduate alumnus or alumna whose career embodies the call to duty in Wilson’s famous speech, "Princeton in the Nation’s Service." In his speech, Leach stressed the value of civility in public discourse.

"In the context of American history, where change was wrought in the crucible of debate about the nature as well as the rights of man, little is more important to the world's leading democracy than recommitting to an ethos of thoughtfulness in the public square," he said. "The times require a new social contract rooted in mutual respect and citizen trust."

Citing charges of communism and fascism that have marked the recent debates over health care reform, Leach warned of the dangerous implications of uncivil debate.

"Isn't it the citizen's responsibility to apply perspective to incendiary words that once summoned citizens to war?" he asked. "There is, after all, a difference between supporting a particular spending or health care position, but asserting that someone who supports a different approach or is a member of a different political party is an advocate of an '-ism' of hate that encompasses gulags and concentration camps is out of bounds."

Leach also lamented the recent Supreme Court decision that loosened regulations on corporate political contributions, noting that the court has applied to corporations the same freedoms of speech granted to individuals under the First Amendment.

"No corporation, under any concept of the founders, was endowed with inalienable rights," he said.

"The notion that corporate spending is free speech totally misunderstands what happens in real politics. Corporate spending today is for one obvious reason -- it's to attempt to be heard in the political process in powerful ways," Leach said.

"The Supreme Court said that the first amendment of the United States, the right of freedom of speech, applies to an entity that isn't a living soul, that is artificial," he said. "The public interest can hardly be advanced if the public voice is silenced in public decision-making."

The addresses by Petraeus and Leach are available for downloading in PDF format. They also will be posted for viewing on Webmedia.