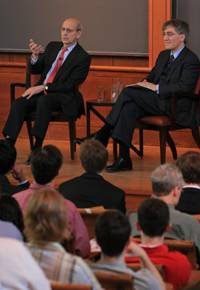 Navigating the myriad issues facing the U.S. Supreme Court, Justice Stephen Breyer told a Princeton audience on April 30 that the constitutional view of liberty is based upon participation in the democratic system, rather than protection from government interference in individuals' lives.

Breyer stressed that the Constitution creates "a tremendously broad area where the primary objective is not to tell people what to do. It provides a system for them to decide what to do through their democratic representatives. That's what it's about."

In front of a capacity crowd in McCosh 50, Breyer was joined by Princeton legal scholar Robert George, who posed several questions about the evolving concept of liberty and constitutional interpretation. Breyer touched on a number of controversial cases that have faced the high court, including campaign finance, affirmative action and public displays of the Ten Commandments.

The event, titled "Active Liberty: A Conversation," continued a public discussion that began in 2004 when George, Princeton's McCormick Professor of Jurisprudence, was one of two panelists to deliver a response to talks Breyer gave at Harvard as part of the Tanner Lectures on Human Values. In those lectures, later published as a book titled "Active Liberty: Interpreting our Democratic Constitution," Breyer argues that constitutional law has shifted too far toward liberty as freedom from government interference and that greater emphasis must be placed on viewing liberty as active citizenship.

The Constitution "is a document that foresees people participating. That's why a good slogan -- I didn't think of it -- is, 'We don't need activist judges, but we do need activist citizens,'" Breyer remarked in his Princeton talk.

Focusing on the Constitution's establishment of protection of basic human rights and separation of powers in the federal government, Breyer said that the Supreme Court is "patrolling the boundaries of that area where people make decisions for themselves. We're here to see that that process stays on the rails."

Breyer was appointed to the Supreme Court in 1994 by President Clinton and is regarded as one of the court's more liberal justices. George, who has been an adviser to the Bush administration and is the founding director of Princeton's James Madison Program in American Ideals and Institutions, has criticized elements of Breyer's approach to constitutional interpretation. The two shared what George described as lively exchanges prior to Breyer accepting his invitation to speak at Princeton.

During their conversation, Breyer explored the merits of legal arguments on both sides of some divisive issues that have recently come before the court to emphasize why it is imperative for justices to "see the Constitution as a whole."

Campaign finance regulations, for example, raised questions about whether limiting campaign contributions would restrict freedom of speech and expression. "You understand there are First Amendment interests on both sides of this equation," Breyer said.

"It requires considerable thought to go into this in detail, and by and large the court has upheld limits on campaign finance," he said. "… There are risks that the people who are writing the law could write themselves into office by making it hard for a challenger to challenge. So what you'll see in the opinion is … a general tendency to let the legislature write limits on the ability to contribute -- and a concern lest they go too far."

In the 2003 University of Michigan affirmative action case, the Supreme Court considered the argument that equal protection should mean a "color blind" approach, but ultimately a majority of justices, including Breyer, reaffirmed the idea that a diverse student body creates educational benefits.

"We have to have an inclusive rather than an exclusive society," he said. "… The majority of the court there is choosing a purposive interpretation. Why? Because it is informed by the basic democratic idea of the [Constitution]."

Breyer also took questions from George, as well as from Princeton students and other audience members, on a range of other topics. One student raised the question of how justices should weigh the original intent of the Constitution's framers, an issue that has put Breyer at odds with conservative colleagues such as Antonin Scalia and Clarence Thomas who take a more "originalist" approach.

"Wooden means looking at phrases in the statute or the Constitution as if they set up a matrix and you could deduce the answer from some kind of logical determination based on language and history alone," he said.

"I think we'll do a better job of taking into major account the purpose and consequences so that the Constitution, which was written in 1789, can work today to impose the values which are enduring upon facts which change every minute. In other words, it works in today's world."

After the event, George praised "Breyer's exemplary willingness to give sympathetic consideration to competing points of view and to acknowledge the strength of positions contrary to his own."

"What the audience was able to see was how Justice Breyer thinks his way through a complicated legal problem," George said. "Time and time again he showed his appreciation for all that was to be said of the competing sides of difficult constitutional questions. The analysis he offered to us today reveals that he appreciates arguments even when he ultimately isn't persuaded. He sees constitutional interpretation as a challenging enterprise and he's willing to credit what's to be said on the other side."

The day before the talk, Breyer met privately on campus with some 75 Princeton students who are junior fellows of the Madison Program and the University Center for Human Values and who are active in the Program in Law and Public Affairs. The three organizations sponsored the talk.

Junior Tom Brown attended both events and said he was inspired by Breyer's comments.

"He had a lot of things to say about the craft of being a justice on the Supreme Court and how he approaches his job," Brown said. "In constitutional law courses … you read the opinions and you get a sense of the specificity that justices apply to particular cases, but here I thought he gave a really great overview of how he goes about the practice of judging and his approach to the Constitution."

Immediately after his talk, Breyer was presented with the James Madison Award for Distinguished Public Service by Princeton's American Whig-Cliosophic Society, the nation's oldest collegiate political and debating organization. The award goes annually to an individual who has dedicated himself or herself to the nation's service and the service of all nations. Past recipients include President Clinton, Supreme Court Justices Earl Warren and Sandra Day O'Connor, Israeli Prime Minister Golda Meir, former U.S. Secretary of State George Shultz and Sen. William Frist.

"At a time when some public servants shy away from discussing and debating the key issues of their jobs, Justice Breyer has come here today to defend and discuss his judicial philosophy," sophomore Aaron Spolin, Whig-Clio's president, said in presenting the award. " … Here today and throughout his career, Justice Breyer has advanced the knowledge of what liberty can mean in America."