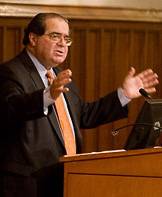 Supreme Court Justice Antonin Scalia said that courts are limited to the powers granted to them by the Constitution in an address Friday, March 7, in McCosh 50. Following the speech, he was presented with the American Whig-Cliosophic Society's 2008 James Madison Award for Distinguished Public Service.

Supreme Court Justice Antonin Scalia said that courts are limited to the powers granted to them by the Constitution in an address Friday, March 7, in McCosh 50. Following the speech, he was presented with the American Whig-Cliosophic Society's 2008 James Madison Award for Distinguished Public Service.

Courts are only as good as the powers granted them through the Constitution, U.S. Supreme Court Justice Antonin Scalia told a Princeton University audience Friday, March 7, during an address on the role of the judiciary in a democracy.

Noting the range of judicial powers afforded in democratic countries today, Scalia argued the U.S. Constitution does not permit the powers courts have in such places as India or Europe, "not because they are incompatible with the role of the courts generally or even the role of the courts in a liberal democracy," but because they were not granted by the Founding Fathers.

Scalia engaged his audience with humor and history -- tracing the role of courts from the Israelites of Biblical times, to French medieval courts during the rule of Louis IX and to the post-World War II constitutional court system in Europe.

Scalia was invited to campus to speak on "The Role of the Courts in a Liberal Democracy," by the University's American Whig-Cliosophic Society, the nation's oldest literary, political and debating society.

The student organization presented the justice with its 2008 James Madison Award for Distinguished Public Service -- the highest distinction it bestows. The award is given annually to an individual who is dedicated to the nation's service and the service of all nations.

Before his address, Scalia met privately on campus with students who are junior fellows of the James Madison Program and are undergraduate associates of the Program in Law and Public Affairs.

Scalia, who was born in Trenton, N.J., was nominated to the Supreme Court by President Reagan in 1986, and is the second most senior associate justice on the court. He is known for his "originalist" approach, which strictly interprets the meaning of the Constitution and opposes the idea of a "living Constitution" that can be adapted as society changes.

For Scalia, a strict definition of the role of the courts means that courts cannot "do whatever it takes to right a wrong."

Scalia said it is up to the legislative branch of government -- not the courts -- to add liberties to the Constitution, citing the 19th Amendment guaranteeing women the right to vote.

Following the address, Whig-Clio President Molly Alarcon asked Scalia questions submitted in advance by students, including one by sophomore Forest Sebastian regarding the Supreme Court's decision in the 2000 presidential election to halt the recount of ballots in Florida.

"Oh, get over it. It's eight years ago," Scalia said, eliciting laughter and applause from some in the audience.

"We were the laughing stock of the world. The world's greatest democracy that couldn't conduct an election," said Scalia, who maintained the majority of citizens were grateful for the ruling. 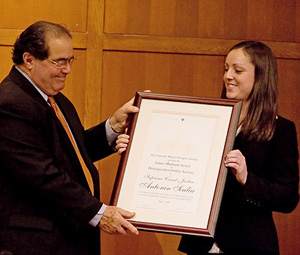 Following the student questions, Alarcon presented Scalia with the Madison award. She cited the justice's contribution to legal thought within and beyond the Supreme Court, as well as "his dedication to the rule of law and his courage in advocating his principles."

"Whether one agrees or disagrees with his style of constitutional interpretation or how he has decided a number of cases, it's easy to respect his intellectual prowess and personal integrity," said Alarcon, a sophomore. "Few jurists in the history of the Supreme Court have played so prominent a role in advancing a method of interpretation as Justice Scalia has."

Past recipients of the annual honor include President Clinton, Supreme Court justices Earl Warren and Sandra Day O'Connor, and Israeli Prime Minister Golda Meir. James Madison, the fourth U.S. president and an architect of the Constitution, was Princeton's first graduate alumnus and one of Whig-Clio's early members.

After the event, Michael Chang, a freshman, said he was impressed by Scalia's eloquence. "Even if you don't necessarily agree with his point of view, you definitely understand its origins and you really respect it," he said.

Matthew Sanyour, also a freshman, said that, after studying him in class, he enjoyed hearing Scalia speak in person.

"I think it's reassuring that there are some public officials that are willing to place hard and fast limits on their authority," Sanyour said. "So often you see Congress or the president always trying to expand their authority and the courts as well, but Justice Scalia seems very intent on keeping the courts in the original meaning of judicial power, which is respectable."