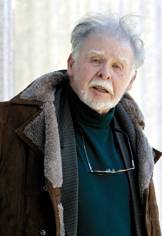 Walter F. Murphy, a groundbreaking constitutional scholar at Princeton University, died April 20 in Charleston, S.C., of cancer. He was 80.

Murphy taught at Princeton for 37 years, ultimately serving as the McCormick Professor of Jurisprudence -- a chair first held by Woodrow Wilson. Murphy's students included U.S. Supreme Court Justice Samuel Alito, for whom he served as a senior thesis adviser.

Murphy was a leading scholar and teacher on a variety of topics, focusing first on political theory and later on judicial decision-making. He then broadened his interests to comparative politics and the problems of creating and maintaining constitutional democracy. Scattered among more than a dozen academic books and numerous articles were three novels noted for their scholarly as well as their literary merit.

"Intellectually, Walter was a leader in many ways," said Sotirios Barber, a professor of political science at the University of Notre Dame. "He pioneered the study of judicial politics within the Supreme Court -- the politics of putting together a coalition on the court to reach a decision. He pioneered the study of comparative constitutional law. Walter was the founder and the leading exemplar of what's now called in some circles the 'Princeton approach' to constitutional studies. This is a view of constitutional institutions from the perspective of institutional designers and reformers as opposed to the perspective of lawyers and judges. It's a view that measures constitutions by their social results.

"Walter met a lot of resistance in mainstream political science circles for this effort because it demanded the integration of normative and empirical approaches," said Barber, who was a collaborator with Murphy for more than 25 years. "But he succeeded. He put together a fairly wide-flung group of scholars and kept them together through the last 20 years. Walter was an important figure and a good man."

Born on Nov. 21, 1929, and raised in Charleston, Murphy attended the University of Notre Dame, earning his A.B. in 1950. He then served in the U.S. Marine Corps in Korea, receiving the Distinguished Service Cross, the Purple Heart, a Presidential Unit Citation and three battle stars. Upon returning from combat, he was assigned to teach at the U.S. Naval Academy from 1952 to 1955. During the evenings, he attended Georgetown University's Institute of Linguistics and received an M.A. from George Washington University in 1954.

Murphy resigned his military commission to attend graduate school at the University of Chicago, where he earned his Ph.D. in 1957. He spent a year as a fellow at the Brookings Institution and joined the Princeton faculty as an assistant professor of politics in 1958. He was named the McCormick Professor in 1968 and retained that chair until his retirement with emeritus status in 1995. He remained in the Marine Corps Reserve, retiring in 1974 as a colonel. He made his home in the Sandia Mountains east of Albuquerque, N.M., for many years.

Murphy's versatility as a scholar was well known throughout the field of politics.

Fred Greenstein, Murphy's colleague since 1973 in Princeton's Department of Politics, said, "His early book 'Elements of Judicial Strategy,' which analyzes the way justices seek to influence one another, is a classic. Despite his corner on that intellectual market, Walter then turned to the crowded field of constitutional interpretation and eventually wrote what I take to be a major comprehensive work on the topic ['Constitutional Democracy: Creating and Maintaining a Just Political Order,' published in 2006].

"In addition to being a first-rate scholar, he was an interesting and popular novelist," said Greenstein, a professor of politics emeritus. "The latter began when he decided that he could not publish his findings in a study of the inner workings of the Catholic Church without compromising the clergymen who were his sources. That led him to publish 'The Vicar of Christ,' a three-part novel that follows a character who first experiences combat in Korea, then becomes a Supreme Court justice and then becomes the first American Pope -- a real page-turner."

The 1979 novel landed on The New York Times best-seller list and won the Chicago Foundation for Literature Award.

Other colleagues described Murphy as a beloved teacher and mentor to generations of graduate students who now teach in universities across the United States. He was known for one course in particular.

"His course on 'Constitutional Interpretation' changed my life," said Princeton Provost Christopher Eisgruber, who majored in physics at Princeton, earned a master's degree in politics at the University of Oxford as a Rhodes Scholar and a law degree at the University of Chicago, then served as a clerk to U.S. Supreme Court Justice John Paul Stevens before returning to academia. "In his hands, the Constitution and the Supreme Court became magical and wondrous subjects. He inspired me, and many others, to careers as constitutional scholars."

Robert George, the current McCormick Professor of Jurisprudence, joined the Princeton faculty in 1985 and began serving as Murphy's preceptor in the course before taking over as lecturer in 1995. "He was my mentor," George said. "I had the great advantage of being able to sit at the feet of the master and learn how to teach the course."

Murphy returned regularly to Princeton for conferences and lectures. "While he was here, he always led a session in the graduate seminar I was teaching. He was always a hit with the students," said Ezra Suleiman, Princeton's IBM Professor in International Studies and professor of politics.

In 2001, the annual Walter Murphy Lecture in American Constitutionalism was named in his honor. In March 2007, Murphy thought it was particularly ironic that he was detained by screeners -- and originally denied a boarding pass -- at the airport in Albuquerque on his way to a symposium at Princeton on his magnum opus, "Constitutional Democracy: Creating and Maintaining a Just Political Order." "I did speak against Bush [at Princeton last September]," he told the Princeton Alumni Weekly. "That's the only reason I can give."

Suleiman, a colleague of almost three decades, said the book Murphy wrote "showed not just his stunning erudition but also that the study of constitutional law in the U.S. could only benefit from comparative study, because the problems involved in establishing democratic constitutions affect many societies. It's important to address the problems comparatively, he argued, and not overly concentrate on a single society and its exceptionality since every society can be said to be unique."

Eisgruber added, "I am glad that he gave us all this book with which to remember him: It is a profound work, and it will transmit Walter's wisdom and wit to new generations of students and scholars."

It was in the area of comparative constitutional law that Murphy advised the Supreme Court's Alito on his thesis in 1972 on "An Introduction to the Italian Constitutional Court."

Stanley Katz, a lecturer with the rank of professor in the Woodrow Wilson School of Public and International Affairs, fondly recalled collaborating on a large comparative constitutionalism project with Murphy many years ago. "I loved working with Walter -- he was deeply thoughtful and well-informed -- although our political views were not closely aligned. But that did not matter to what became one of my closest friendships at Princeton. Walter was the real article, and I loved him."

Suleiman added, "His hallmark was his integrity, which meant speaking his mind and which, he realized, did not always go over well. But this didn't stop him. And he was beloved for his sincerity and his wit."

Elected a fellow of the American Academy of Arts and Sciences in 1976, he received fellowships from the National Endowment for the Humanities and the Guggenheim Foundation as well as three Fulbright awards. In 1995, the Law and Courts Section of the American Political Science Association honored him with its Lifetime Achievement Award.

Murphy was married for 54 years to Mary Therese Dolan Murphy, who died in 2006. In 2009, he moved from Albuquerque back to Charleston and married Doris Maher Murphy of Ravenel, S.C., the first girl he ever dated, on Jan. 9, 2010. He also is survived by his two daughters, Kelly Murphy of Albuquerque and Holly Murphy of Denver.

A campus memorial service is scheduled for 3 p.m. Wednesday, June 9, in the University Chapel. A reception will follow in the Chancellor Green Rotunda.

Those wishing to make a donation in Murphy's honor should send checks made payable to the Trustees of Princeton University, along with a cover letter indicating specific information on the fund to which the donation is to be directed, to: Terry Murphy President's Fund (0813536), Alumni and Donor Records, Princeton University, c/o Helen Hardy, P.O. Box 5357, Princeton, NJ 08543-5357.