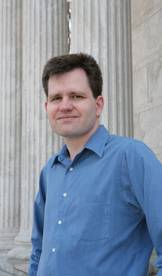 Constitutional scholar Keith Whittington has written a new book in which he argues that Supreme Court justices, instead of being above political maneuvering, actually have become key players in an important political battle: having the last word on interpreting the U.S. Constitution. Photo: Denise Applewhite

The Supreme Court frequently is viewed as an isolated fortress of thoughtful deliberation, where robe-clad justices ponder right and wrong far from the political maneuvering taking place in the White House. But Keith Whittington, the William Nelson Cromwell Professor of Politics, doesn't see it that way.

"The court is often portrayed as being above politics — there is an expectation that the court is specifically in conflict with political imperatives," Whittington said. "I tend to be skeptical of that way of thinking."

In his new book, "Political Foundations of Judicial Supremacy: The Presidency, the Supreme Court and Constitutional Leadership in U.S. History," Whittington argues that in recent years the court has become the key player in an important political tussle: Who has the final say in constitutional matters? Whittington asserts that the court has become the final arbiter, but that status did not result from a power grab by the court. Its power, remarkably, has come from politicians, who have pushed onto the court the responsibility for making final rulings on constitutional matters because, paradoxically, it benefits the politicians.

"Presidents are mostly deferential to the court," said Whittington. "They have pushed constitutional issues into the courts for resolution and encouraged others to do the same. That has led to an acceptance of the court's role in these issues."

It seems counterintuitive that politicians would want to defer to the court on some of the most high-stakes decisions in government, but Whittington has found that they do so because the court often rules in the ways that presidents want — and provides politicians with the political cover they need.

In 1995, the Clinton administration faced a proposal from the Senate to regulate pornography on the Internet. The president thought the bill was unconstitutional, but he didn't want to risk appearing lenient on such a hot-button issue right before he was up for re-election, Whittington said. Clinton signed the legislation with the hope that the Supreme Court would strike it down as unconstitutional, which it later did.

The gradual shift of constitutional decision-making to the court began in the 1850s, when both parties were internally divided by the issue of slavery.

"That was the first major issue that cut through existing political coalitions, and politicians didn't want to vote and risk alienating any part of their coalition," Whittington said. "There was a preference for letting the court make decisions, and that gradually became the norm. There wasn't a single turning point — it was an evolution."

But the court was more than willing to accept the power bestowed on it, Whittington pointed out. "Justices often seize opportunities to expand their power. They want their branch of government to be strong."

Scholars have called Whittington's book, which was published by Princeton University Press, a compelling study of judicial power that reveals previously undetected patterns in the expansion of judicial authority. "Whittington's sweeping reformulation of the role of the Supreme Court alters our entire view of American government," said Stephen Skowronek, the Pelatiah Perit Professor of Political and Social Science at Yale University.

"Keith Whittington is the most gifted and accomplished scholar of American constitutional development of his generation," said Robert George, Princeton's McCormick Professor of Jurisprudence. "His books and articles have profoundly enriched our understanding of how the vision of the American founders has shaped law and policy as our nation has grappled with its most important challenges — the Civil War, the abolition of slavery, industrialization, the Great Depression, the two World Wars, the rise of the administrative state, the Cold War, the struggle for civil rights."

After earning his bachelor's degree from the University of Texas-Austin, Whittington received his Ph.D. from Yale University. He taught at Catholic University of America for two years before arriving at Princeton in 1997, joining a department whose first chair was one of the nation's most important figures in constitutional scholarship, Edward Corwin. The building that houses the Department of Politics — originally named Woodrow Wilson Hall — was redesignated Edward Corwin Hall in 1952.

"It's particularly nice to be at a university that has a long tradition of work in American constitutional issues and constitutional history," Whittington said.

Junior Brett Amelkin selected Whittington as her adviser for her junior paper, in which Amelkin examined how Franklin Roosevelt's nominations for the Supreme Court influenced the president's popularity. "Professor Whittington got me excited about a topic that I previously knew nothing about, which I think is a rare and important aspect to his teaching style," said Amelkin, who took Whittington's class on American constitutional development this spring. "He is always accessible, knowledgeable and willing to talk about any question that arises."

Junior Amanda Rinderle is submitting her junior paper on the Marbury vs. Madison decision, also written with Whittington as her adviser, to law review journals. "If it weren't for Professor Whittington, I would never have embarked on such an ambitious project," she said. "He has a unique perspective on issues because he is so well versed in history, politics and law."

Whittington will bring that unique perspective to his new book project, a political history of the Supreme Court's decisions regarding congressional powers and federal laws from the founding period to the present. He will examine how the decisions on those issues by the justices — those pillars of the law — have been influenced by politics.