As laws involving American civil liberties have evolved, individuals have needed to be especially vigilant about those rights in wartime, speakers concluded at the "Civil Liberties in Times of War" policy forum held Sept. 18 and 19 in Robertson Hall on the Princeton University campus.

The conference was sponsored by the Woodrow Wilson School of Public and International Affairs; the Program in Law and Public Affairs; and the Mudd Manuscript Library at Princeton, which houses the complete American Civil Liberties Union (ACLU) archives. The ACLU was involved in planning the event.

Cecilia Rouse, dean of the Wilson School, opened the conference and noted that, on issues where security and civil liberties collide, the organizers "wanted to explore the ways that the legal and historical record can positively influence policy going forward."

The event began with a look into how security and technology affect civil liberties in the 21st century. Edward Felten, the Robert E. Kahn Professor of Computer Science and Public Affairs, and Jeffrey Rosen, president and CEO of the National Constitution Center, discussed whether the government's gathering and use of cell phone and telephone metadata without warrants is consistent with the Constitution's Fourth Amendment, which pertains to search and seizure.

"If you have a large database of information about the population, you can use machine learning to build a predictive model that can look at a person's phone call patterns and makes inferences — with some degree of confidence — about that person and his or her lifestyle," said Felten, who is also director of the Center for Information Technology Policy. "And so we know that metadata, especially in bulk, examined with modern data analysis techniques, can be exceptionally revealing about an individual and about a population."

Launching the second day of the conference, ACLU Executive Director Anthony Romero, a 1987 Princeton alumnus, said the ACLU archive is a window into American history. He introduced ACLU President Susan Herman, who gave an overview of the ACLU's history and showed how the organization's case records can be used to track historical trends in the United States. 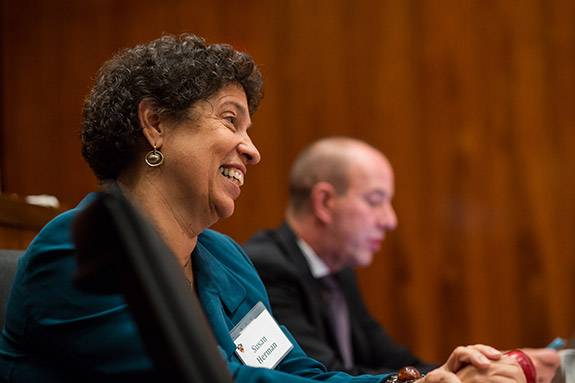 Susan Herman (left), president of the American Civil Liberties Union (ACLU) and professor of law at Brooklyn Law School, and Anthony Romero (right), executive director of the ACLU and a 1987 alumnus, launch the second day of the "Civil Liberties in Times of War" conference. (Photos by Tori Sulewski/Fotobuddy for the Wilson School)

Throughout the day, panelists explored the constitutionality of government actions that have been criticized as violations of civil liberties. The first panel, "When 'Others' Scare Us: World War II and Japanese Internment, and the War on Terror and Treatment of Muslim Americans," drew parallels between the landmark Supreme Court case Korematsu v. United States, which sanctioned an executive order that placed Japanese Americans into internment during World War II, and the government's surveillance of Muslim Americans after 9/11. Denny Chin, judge for the U.S. Court of Appeals for the 2nd Circuit, 1975 alumnus and trustee of the University, emphasized the emotional impact families and individuals suffered during their internment.

The second panel, "Saying 'No' to War — World War I, the Vietnam War and Conscientious Objectors," explored constitutional history and how the ACLU has influenced cases involving those who refuse on principle to fight in wars. One panelist, Aryeh Neier, president emeritus of the Open Society Foundations, recounted his time in the 1960s as national executive director of the ACLU, defending the rights of Vietnam War protestors. 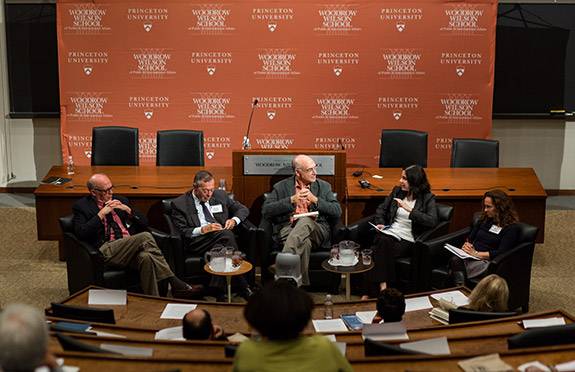 Speakers on a panel about World War I, the Vietnam War and conscientious objectors include: from left, Samuel Walker, professor emeritus of criminal justice at the University of Nebraksa at Omaha; Aryeh Neier, president emeritus of the Open Society Foundation; Hendrik Hartog, the Class of 1921 Bicentennial Professor in the History of American Law and Liberty at Princeton and the director of the Program in American Studies; Laura Weinrib, a graduate alumna and assistant professor of law and the University of Chicago Law School; and Risa Goluboff, a graduate alumna and professor of law and history at the University of Virginia.

The final panel, "The Spy Who Didn't Come in From the Cold: Surveillance in the Name of National Security vs. Privacy — The Cold War and McCarthyism; the Pentagon Papers; Wikileaks; and the Snowden Affair," discussed the constitutional rights of whistleblowers, as well as the constitutionality of Section 215 of the Patriot Act, which concerns the collection of telephone metadata. The panel included Barton Gellman, the journalist who broke the Snowden story in the Washington Post and a 1982 alumnus who is a visiting professional specialist and lecturer at the Wilson School. 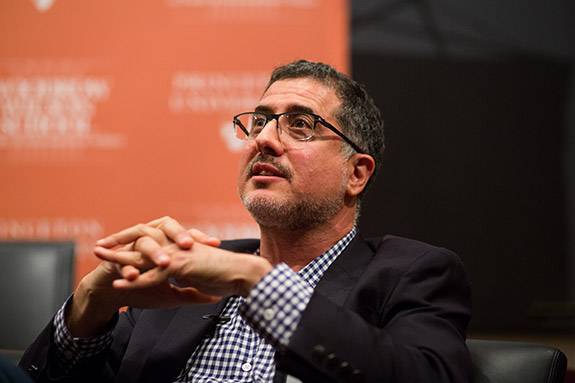 Journalist Barton Gellman, a 1982 alumnus and visiting professional specialist and visiting lecturer in public and international affairs at the Woodrow Wilson School of Public and International Affairs, speaks about the National Security Agency's global surveillance program, which he played a significant role in uncovering.

For the conference's keynote presentation, Geoffrey Stone of the University of Chicago discussed his recent service on President Barack Obama's Review Group on Intelligence and Communications Technologies, a group commissioned following the disclosures about surveillance activities of the National Security Agency (NSA).

While Stone entered the Review Group skeptical of the government's actions (particularly given his strong record of litigating in defense of civil liberties), he concluded that the problem with the NSA's global surveillance program was not always the agency itself. Rather, it was because the NSA was given authorities and responsibilities by braches of government that it should not have been given. 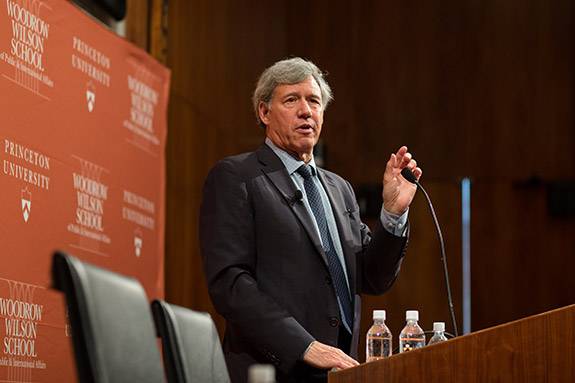 In the conference's keynote presentation, Geoffrey Stone, a distinguished service professor at the University of Chicago, discusses his recent service on President Barack Obama's Review Group on Intelligence and Communications Technology.

"There are organizational records from the board of directors and the executive directors and records from regional offices, including the Southern Regional, which played a very important role in our nation's civil rights struggle," Linke said. "The collection is proof, especially in the context of this conference, that the archives should not be thought of as a collection of dead letters, but a place that has ideas that still have life."

For videos of the conference's talks and panels, visit the Wilson School website. A more detailed report on the conference is also posted at the website.

Romero speaks on the state of civil liberties since Sept. 11