Testifying before a hearing of the U.S. Senate Judiciary Committee on Tuesday, Oct. 1, Felten said that searching for patterns in large collections of data, called metadata, "can now reveal startling insights about the behavior of individuals or groups."

Felten, a professor of computer science and public affairs and director of the Princeton Center for Information Technology Policy, said that merely by combining their analysis of phone records with call times and durations, investigators can learn about people's work, social habits, religion and political affiliations. 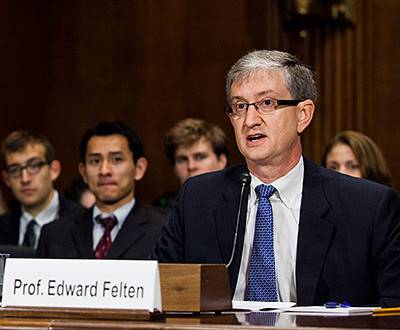 Edward Felten, a professor of computer science and public affairs and director of the Princeton Center for Information Technology Policy, testifies Oct. 1 before the U.S. Senate Judiciary Committee in Washington, D.C. Felten said the amount information that can be learned about citizens from seemingly minor information in telephone records is more revealing than commonly believed. (Photo by Eva Russo/Momenta Creative)

In calling the hearing to order, Sen. Patrick Leahy, D.-Vt., said the United States needs to strike a careful balance in using surveillance to protect its citizens while also preserving their liberty. Leahy, the committee chair, has raised concerns over the government's collections of bulk phone records and what that might entail for privacy.

The Judiciary Committee is one of several bodies examining recent revelations about surveillance conducted by U.S. intelligence agencies. At the hearing, the senators echoed the greater national debate, with committee members raising concerns about the transparency of the intelligence collection, and its impact on citizens' privacy, while also expressing a desire not to hobble efforts to maintain national security.

The hearing opened with testimony by James Clapper, director of national intelligence, and Keith Alexander, director of the National Security Agency.  After they testified, Felten was one of three expert witnesses to appear before the committee. The others, Laura Donohue, a professor at the Georgetown University law school, and Carrie Cordero, an adjunct professor at Georgetown, testified about the legal implications of the surveillance program, while Felten offered his views of the technical issues. 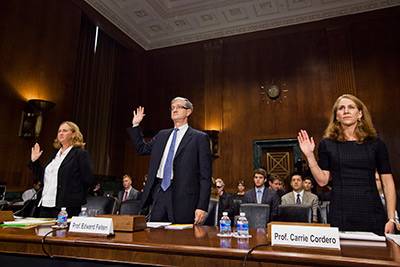 Princeton University Professor Edward Felten is sworn in to testify at a U.S. Senate Judiciary Committee hearing on Oct. 1 in Washington, D.C., along with Laura Donohue (left), a professor at the Georgetown University law school, and Carrie Cordero, an adjunct professor at Georgetown. (Photo by Eva Russo/Momenta Creative)

Felten told the committee members that it was critical for legislators who make the laws and judges who review them to have a firm grasp of the technical implications of their decisions. He urged them to take advantage of the nation's technological experts when grappling with the policy implications of advancing technology.

In some ways, technological shifts have led to sweeping changes in capabilities that legal decisions can have difficulty following. In recent history, for example, records of telephone calls revealed information that was considered far more limited, and less protected, than the contents of the call itself.

"It is no longer safe to assume that this 'summary' or 'non-content' information is less revealing or less sensitive than the contents it describes," Felten said. "Just by using new technologies such as smart phones and social media, we leave rich and revealing trails of metadata as we move through daily life. Many details of our lives can be gleaned by examining those trails."

In prepared testimony, Felten explained that the data that can be collected under federal orders is vast. By one estimate, he said, the collection of phone records would result in the equivalent of 25 billion pages of records each year. Although the amount seems staggering, the data is easy to analyze because it is standardized in a structured numerical format.

"The structured nature of metadata makes it easy to analyze massive data sets using sophisticated data-mining and link-analysis programs," Felten said. "That analysis is greatly facilitated by technological advances over the past decades in computing, electronic data storage, and digital data mining. Those advances have radically increased our ability to collect, store, and analyze personal communications, including metadata."

Felten, who served as the first chief technologist at the Federal Trade Commission, noted that he was not offering a legal opinion or advice on how to balance security and privacy. He recognized both the potential danger and value of data collection.

"When focused on intelligence targets, metadata collection can be a valuable tool," Felten said. "At the same time, unfocused collection of metadata on the American population gives government access to many of the same sensitive facts about the lives of ordinary Americans that have traditionally been protected by limits on content collection. Metadata might once have seemed much less informative than content, but this gap has narrowed dramatically and will continue to close."