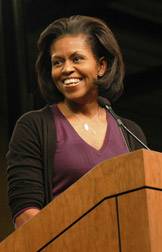 It was in the halls of Princeton's Third World Center that class of 1985 graduate Michelle Obama cultivated her commitment to service. In January, she will be the first Princeton alumna to serve as first lady of the United States. And as the new administration prepares to take office, three Princeton alumni have key roles on President-elect Barack Obama's transition team.

Christopher Lu of the class of 1988 will serve as executive director of the presidential transition team, known as the Obama-Biden Transition Project. Class of 1982 graduate Lisa Brown has been named the transition team's co-director of agency review, and Michael Froman, a 1985 classmate of Michelle Obama's, has been appointed to the project's advisory board.

Obama, formerly Michelle LaVaughn Robinson, majored in sociology at Princeton and was actively involved with African American and service organizations on campus. She will be the first African American first lady.

Her commitment to serving her community was nurtured at Princeton as she served on the Third World Center's governing board and was coordinator of its after-school program. The center, now known as the Fields Center, was established in 1971 to provide a social, cultural and political environment that was responsive to issues of ethnic and racial diversity.

"The grace, intelligence and compassion we see in Michelle Obama today were evident when she was a student at Princeton," said class of 1984 graduate Hilary Beard, a friend of Obama's while at Princeton. "She was always kind toward and attentive to other people, especially children, for whom she exhibited tremendous concern. In particular, this was reflected in her community service tutoring children in the town of Princeton."

Czerny Brasuell, director of the Third World Center from 1981 to 1984, said Obama was an empathetic and honest student who identified with the needs of others -- traits she is sure to bring to the role of first lady.

"Her strengths as a tremendously humane and intelligent individual would be used in service of whatever role she saw fit to take on," Brasuell said.

Obama's interest in public service continued after graduating from Princeton and Harvard Law School in 1988. After working at the law firm Sidley Austin in her hometown of Chicago, she served as assistant commissioner of planning and development for the city of Chicago and then as the founding executive director of the Chicago chapter of Public Allies, an AmeriCorps program that prepares young people for public service.

Obama's brother, Craig Robinson, is a member of Princeton's class of 1983. Robinson played on the Princeton men's basketball team, earning two Ivy League Player of the Year titles, and is now the head men's basketball coach at Oregon State University.

Michelle and President-elect Barack Obama were married in 1992 and have two daughters, Malia and Sasha.

A New Jersey native, Lu will oversee the president-elect's transition team charged with preparing policy recommendations, assisting with the selection of Cabinet members and senior personnel, and ensuring a smooth transition to the White House. Lu has served as the legislative director of Obama's Senate office since 2005. Lu began his career as a law clerk to a federal court of appeals judge, was a litigator at Sidley Austin in Washington, D.C., and was the deputy chief counsel for the Democratic staff of the House Government Reform Committee.

Lu was a classmate of Barack Obama at Harvard Law School. At Princeton, Lu majored in the Woodrow Wilson School of Public and International Affairs, and his thesis focused on press coverage of presidential primaries.

With a degree in politics from Princeton, Brown will serve as the transition team's co-director of agency review. Brown is the executive director of the American Constitution Society for Law and Policy, a progressive, nonpartisan, legal and educational organization based in Washington, D.C. Prior to joining the group, she worked at the civil rights law firm Relman & Dane, formerly Relman & Associates, served as counsel to Vice President Al Gore, worked as an attorney adviser in the Department of Justice and was a partner at the law firm Shea & Gardner.

Brown graduated from the University of Chicago Law School and was a clerk for a judge on the 11th U.S. Circuit Court of Appeals in Alabama.

Froman will join the advisory board that will assist the co-chairs of the Obama-Biden Transition Project. The board includes individuals with various experiences in the private and public sectors.

Froman is managing director and head of infrastructure and sustainable development at Citi Alternative Investments and a member of Citi's Management Committee. He has served in various positions at Citi since joining the financial company in 1999. He previously spent several years working for the federal government, serving as chief of staff and adviser to Treasury Secretary Robert Rubin and as director for international economic affairs at the National Security Council and National Economic Council at the White House.

Froman was a Woodrow Wilson School major at Princeton and classmate of Barack Obama at Harvard Law School. From 2004 to 2007, he participated in the Princeton Project on National Security in the Woodrow Wilson School, an initiative to develop a sustainable and effective national security strategy for the United States that concluded with a final report presented around the world.