A portrait of Princeton alumna and First Lady Michelle Obama was installed Wednesday, Feb. 4, on the Class Photo Wall in the Tap Room of the Nassau Inn that has become a place of honor for some of the University's most eminent graduates.

The event was sponsored by Princeton's Department of Sociology and the University's Center for African American Studies, which produced a framed senior class photo of Obama and presented it to the Nassau Inn for installation. 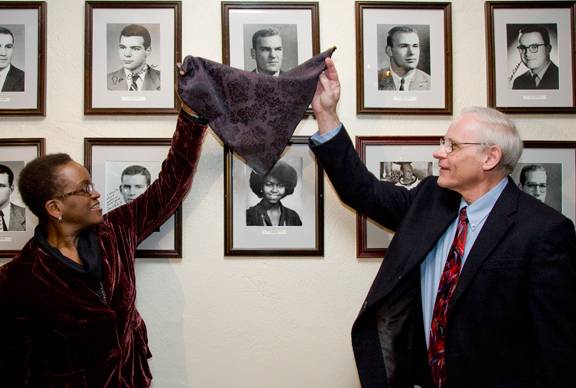 Obama, formerly Michelle LaVaughn Robinson, received her bachelor's degree with honors in sociology in 1985, and her thesis earned an award citation from what was then the Program in African American Studies. She went on to Harvard Law School and later to the corporate law firm of Sidley Austin, before becoming vice president of community and external affairs for the University of Chicago Medical Center.

Obama has remained a member of the sociology department's advisory board for the past several years, and the portrait installation provided an opportunity for current students in the department and the center to celebrate her continued accomplishments and service, organizers said.

"We are enormously proud of Michelle Obama's accomplishments and very pleased that Princeton was able to be a part of her educational experience," said Robert Wuthnow, chair of the sociology department and the Andlinger Professor of Sociology. "She is truly a role model and source of inspiration."

Valerie Smith, chair of the Center for African American Studies and the Woodrow Wilson Professor of Literature, added, "Michelle Obama is a model of sharp intelligence, professional accomplishment, impeccable style, engaged citizenship and commitment to family who has inspired millions of people all over the world. We are proud that a woman of her achievements is the product of sociology and African American studies at Princeton and thrilled that she will be honored by the Nassau Inn in this way."

Among the speakers at the event were Wuthnow and Smith as well as Professor Emeritus Walter Wallace, who supervised Obama's senior thesis, and Professor Emeritus Howard Taylor, who was the director of the Program in African American Studies when Obama was a student.