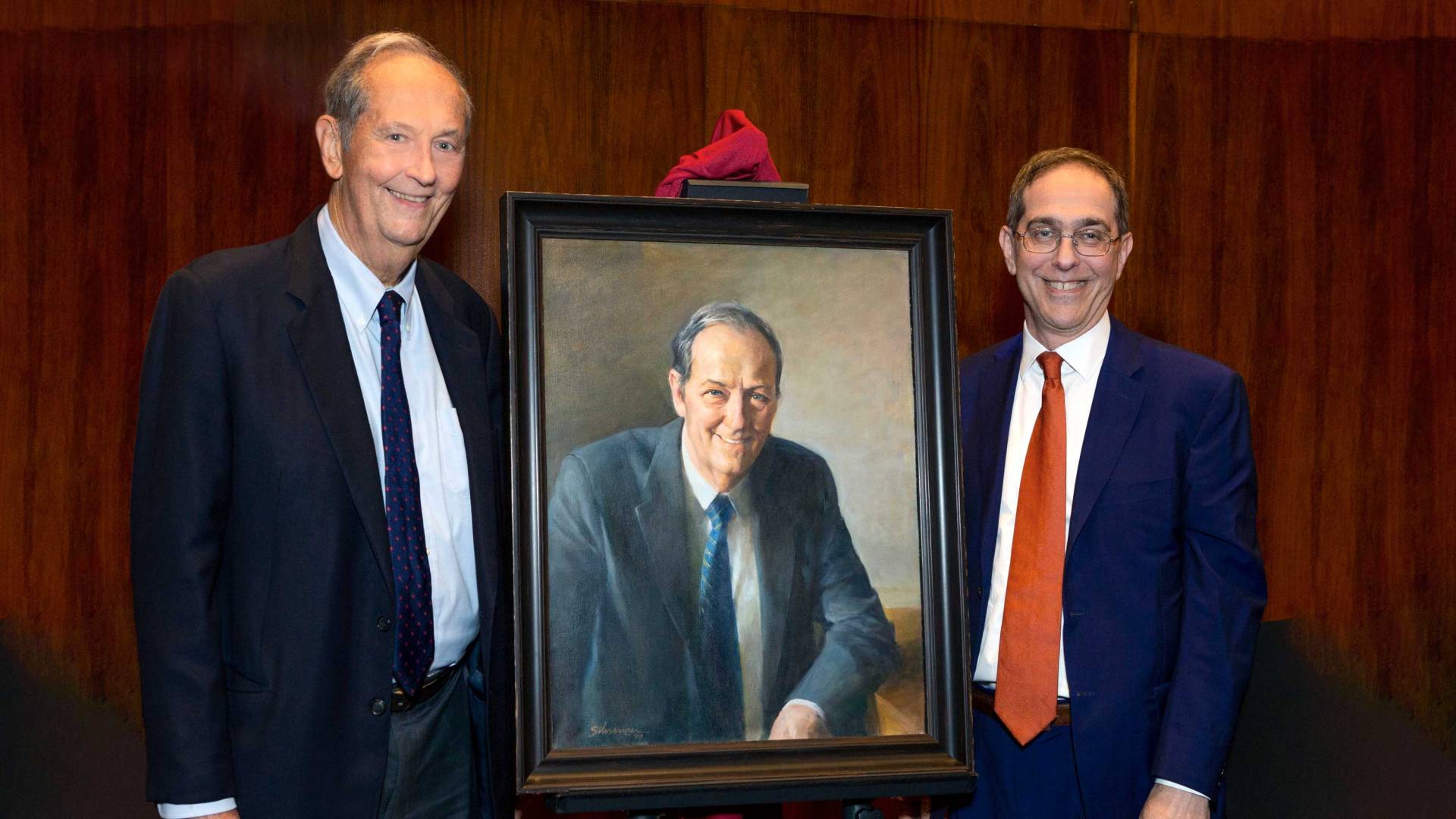 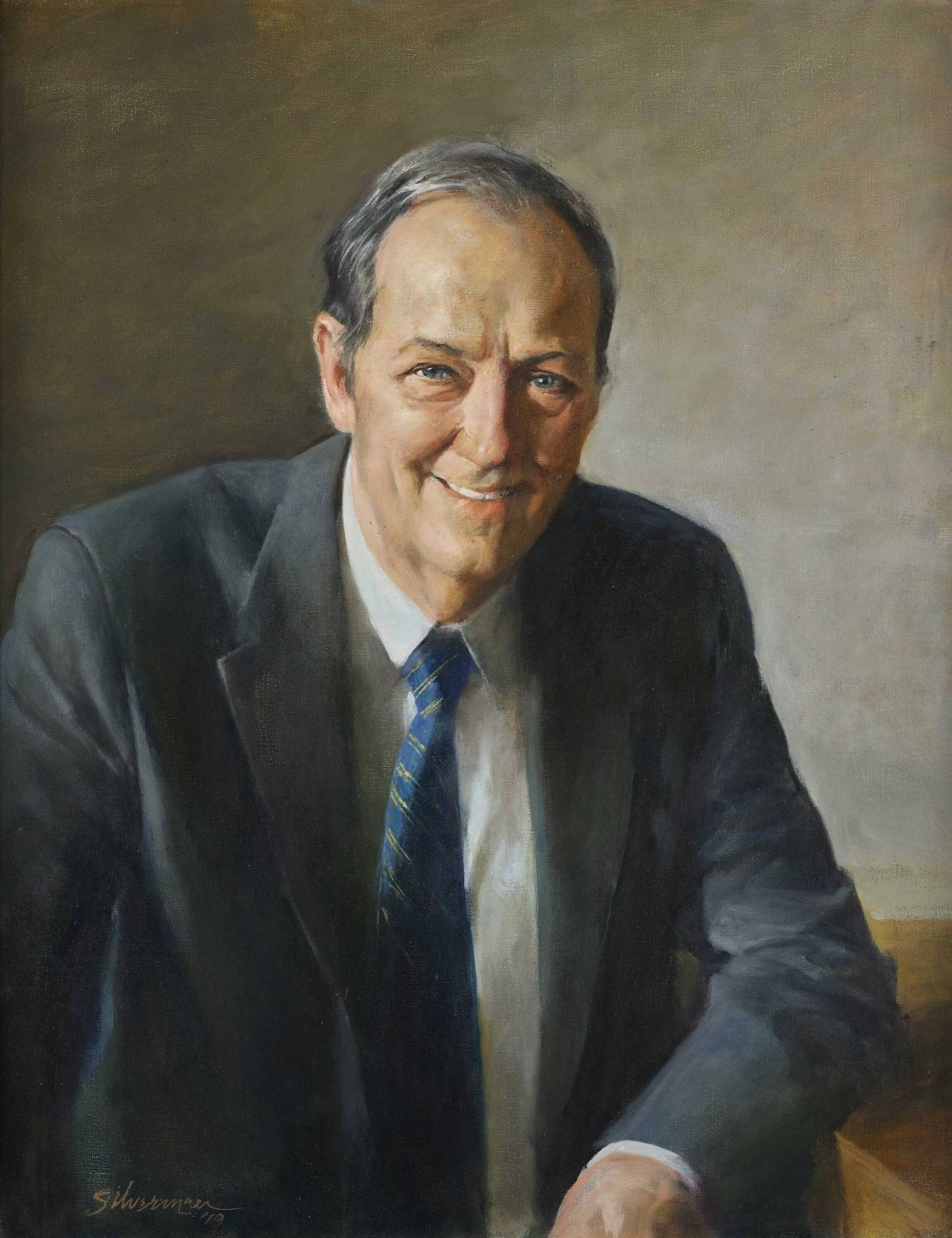 Bradley famously led Princeton’s men’s basketball team to an Ivy League title and the NCAA semifinals while at Princeton, remains the University’s all-time leading scorer, went on to become an Olympic gold medalist and an NBA champion for the New York Knicks, and served his state and his country as a three-term U.S. Senator from New Jersey. He was in attendance accompanied by family, colleagues and friends.

In welcoming attendees to the unveiling, Princeton President Christopher L. Eisgruber said it was difficult to decide where to begin when discussing Bradley’s illustrious career.

“His extraordinary accomplishments, both on and off the court, are a testament to the phenomenal work ethic, resilience and strength of character he has exemplified throughout his entire life,” Eisgruber said.

He continued: “With this portrait, Senator Bradley will be remembered, not just by those on campus today, but by generations of Princetonians for many decades to come. His legacy at Princeton, and his contributions to the nation and to humanity, will endure. We are forever grateful for the enormous impact that Bill has made throughout his career … and for the inspiration he has been to so many of us.”

In his remarks, Bradley was generous in his thanks to Silverman and quipped, “I think he caught the core of an aging jock.” The artist was unable to attend the event.

Bradley recounted how he came to Princeton, turning down 75 basketball scholarships before originally choosing Duke University, then changing his mind days before the start of first-year classes to attend Princeton, where he played for coach Willem Hendrik "Butch" Van Breda Kolff, Class of 1945.

“That decision changed my life in fundamental ways,” Bradley said. “First it brought me to New Jersey, which I had the honor of representing for 18 years. It introduced me to the life of the mind. … And by chance, it gave me a college coach with whom I was totally in sync about how basketball should be played. And most importantly, friends, so many friends — many of whom are here today.”

Craig Robinson, Class of 1983, executive director of the National Association of Basketball Coaches, a former vice president for the New York Knicks, and himself a decorated Princeton basketball player and Ivy League coach, was on hand to honor Bradley and his legacy on and off the court.

Robinson recalled his own Princeton basketball coach, Pete Carril, who recently died at age 92, incessantly invoking Bradley’s name at practice. Robinson, a Chicago native, was a Bulls fan and joked that he was none too happy at hearing Carril extolling Bradley at a time when the Knicks regularly punished the Bulls.

After sharing several personal anecdotes, Robinson turned to Bradley at the dedication in Dobbs Auditorium with a more serious tone.

“I just want you to know how much I appreciated as a student athlete and as a member of society, how you use your athletic character to make people more aware, politically, socially, civically, and most importantly, morally,” Robinson said. “You have been a terrific inspiration to the Princeton community, to people all over the world and particularly to Craig Robinson, and so thank you for that.”

In addition to his remarks for the portrait unveiling, Bradley made an announcement of interest to scholars. In 2018, the Princeton University Library acquired the Bill Bradley Papers, an extensive collection of documents and records chronicling Bradley’s U.S. Senate career, his professional career with the New York Knicks, and his years as an undergraduate at Princeton.

At the conclusion of his remarks, Bradley said his U.S. Senate papers will be open for researchers effective immediately. They were slated to be sealed until 2032.

Bradley’s portrait, an oil on canvas, was commissioned by Princeton upon the recommendation of the Portraiture Nominations Committee, which was convened in 2017.

Deborah Prentice, University provost and the Alexander Stewart 1886 Professor of Psychology and Public Affairs, gave opening remarks explaining the provenance of the Portraiture Nominations Committee and its impact. Treby Williams, Princeton’s executive vice president, who headed the Campus Iconography Committee from 2017 to 2019, was also in attendance.

“In recent years, three evaluations of the place of Woodrow Wilson in the University’s collective memory have helped highlight the obvious truth that our portrait collection does not fully reflect Princeton’s history, its present and its aspirations for the future,” Prentice said. “The committee, which includes students, faculty and staff members was charged with making recommendations for the expansion of the University’s portrait collection to honor individuals who have contributed much to Princeton, but whose legacy was not properly acknowledged.”

The University began diversifying its portrait collection in 2017 with commissions honoring Toni Morrison and Sir W. Arthur Lewis, both Nobel laureates. Princeton then announced in 2018 that it would commission eight new portraits, including Bradley’s, to recognize individuals who, over the past 75 years, have been preeminent in a particular field, who have excelled in the nation’s service and the service of humanity, or have made a significant contribution to the culture of Princeton.

The portraits of Chin, Fields, Rivers and Turing were dedicated in a ceremony held in 2019. Fuchs and Simmons’ portraits are scheduled to be unveiled Nov. 16. Plans to unveil Sotomayor’s portrait have yet to be announced. 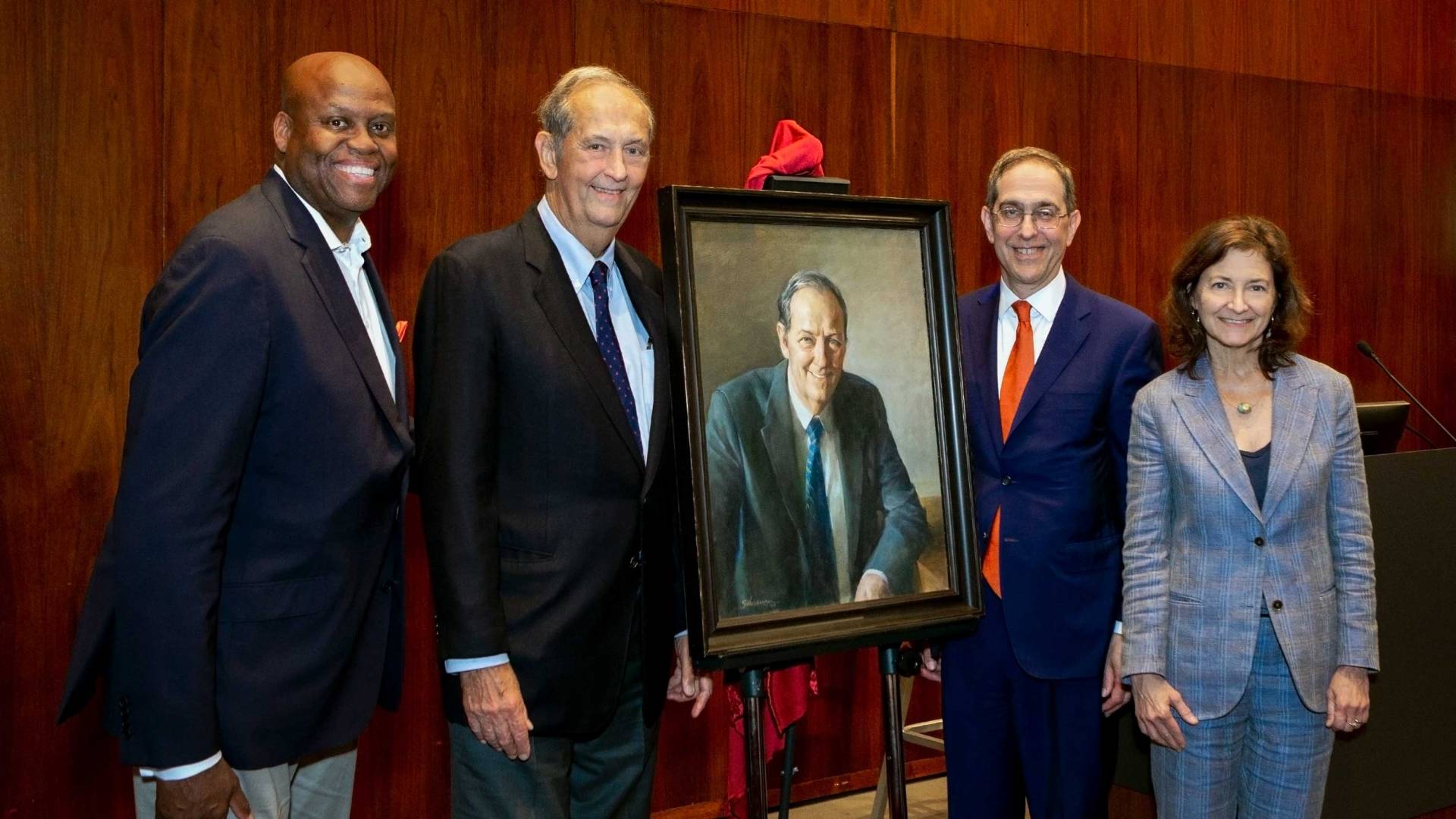 Attendees at the portrait unveiling and reception spanned generations — from Bradley's family, colleagues and friends to current students. Among the speakers during the unveiling were (left to right) Craig Robinson, Class of 1983, executive director of the National Association of Basketball Coaches; Sen. Bradley; President Eisgruber; and University Provost Deborah Prentice.

'A Sense of Where You Are,' from basketball court to Senate chambers

Both as a student athlete and as a national and international leader, Bradley has embodied Princeton’s ethos of excellence and service.

John McPhee, senior fellow in Princeton’s Program in Journalism, who in 1965 wrote a seminal profile of Bradley “A Sense of Where You Are,” which appeared in The New Yorker and later became McPhee’s first book, was unable to attend the portrait unveiling ceremony.

In an email, McPhee recounted a Bradley moment at Princeton that has remained vivid in his own mind since 1965, when Princeton’s basketball team beat Providence by 40 points in the NCAA regional final.

“Bill got up on top of the bus that returned the team to the center of the Princeton campus,” McPhee wrote. “A scarf flying across one shoulder, he addressed the thousands of students who had swarmed around the bus. Affection for his teammates and for the school around him came across in everything he said, feelings he would never lose. He is still on top of the bus, and his likeness has evolved into an enduring portrait.”

He led Princeton to three league championships and its only NCAA Final Four berth. He went on to play for 10 seasons with the New York Knicks, winning the NBA title in 1970 and 1973, and he was inducted into the Basketball Hall of Fame.

A Rhodes Scholar, Bradley turned to politics after concluding his basketball career. He served in the U.S. Senate from 1979 to 1997, and in 2000 he was a candidate for the Democratic presidential nomination.

Today he is managing director of Allen & Company LLC. Bradley is the author of six New York Times’ best-selling books and hosts a radio show on SiriusXM, “American Voices.” He is a former member of Princeton’s Board of Trustees, earning Princeton’s Woodrow Wilson Award in 1987.