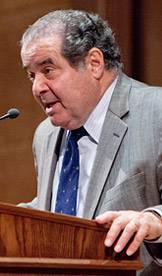 U.S. Supreme Court Justice Antonin Scalia speaks at Princeton University Monday, Dec. 10. In his talk, Scalia discussed his book "Reading Law," as well as his judicial philosophy of narrowly interpreting the Constitution and other legal statutes based on the written text and its original meaning.

In a lighthearted, plainspoken talk at Princeton University, Supreme Court Associate Justice Antonin Scalia discussed his judicial philosophy of reading the U.S. Constitution on its textual basis and original meaning.

"The fairest reading of the text is what the law means," he said Monday, Dec. 10, to an audience of more than 700 at Richardson Auditorium in Alexander Hall. "When we read Shakespeare we use a glossary because we want to know what it meant when it was written. We don't give those words their current meaning. So also with a statute — our statutes don't morph, they don't change meaning from age to age to comport with the whatever the zeitgeist thinks appropriate."

Scalia's talk was titled "Reading Law," which is also the title of the book he co-authored with legal language expert Bryan Garner and published earlier this year. Scalia touched on the book in his hour-long talk and question-and-answer session. He declined to express any opinions about controversial cases that may come before the Supreme Court such as the same-sex marriage cases to appear this term, but he defended his rhetorical tone in writing about gay rights cases in a question from a student in an animated exchange.

Scalia, the most senior associate justice on the Supreme Court, was born in Trenton, N.J. He was nominated by President Ronald Reagan and joined the court in 1986, after a legal career that included private practice, academia, and serving as an assistant attorney general and appeals court judge. 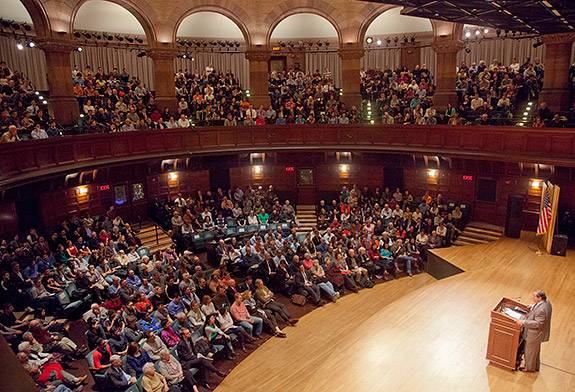 On campus, Scalia delivered the annual Herbert W. Vaughan Lecture on America's Founding Principles, intended to promote understanding of the founding principles and core doctrines of American constitutionalism. The lecture was sponsored by the James Madison Program in American Ideals and Institutions, which promotes teaching and scholarship in constitutional law and political thought. Prior to the talk, Scalia met for an hour with about 150 students in the Madison Program's Undergraduate Fellows Forum. Madison Program director Robert George, Princeton's McCormick Professor of Jurisprudence and a professor of politics, introduced Scalia as a "great man of the law."

Scalia said his book explains his judicial philosophies of textualism and originalism — applying the meaning of the words at the time the document was written when analyzing legal statutes — in detail, and it also provides thorough discussions of the different modes of interpretation that textualists can employ in interpreting legal material.

In the talk, Scalia primarily contrasted his philosophy of originalism with the common conception of a "living Constitution" that changes with society over time. One example, he said, was the issue of whether the death penalty ought to be considered "cruel and unusual punishment" as prohibited by the Eighth Amendment, and as some of his colleagues on the Supreme Court believe. 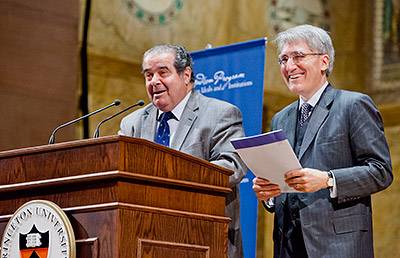 Princeton professor and director of the James Madison Program in American Ideals and Institutions, Robert George, right, moderates the question-and-answer session between students and Scalia, left.

"There is absolutely no doubt that when the Eighth Amendment was adopted — nobody, nobody, not a single person, thought" it applied to the death penalty, Scalia said. "Nonetheless, my four colleagues thought that somehow it was within their power to say that's what the cruel and unusual punishment clause means today, even though it never meant that. … That is what the living Constitution produces."

The notion of a living Constitution has risen over the last 30 years and has percolated throughout society, with Scalia and Justice Clarence Thomas the only originalists on the Supreme Court, Scalia said.

"I have classes of little kids who come to the court, and they recite very proudly what they've been taught, 'The Constitution is a living document.' It isn't a living document! It's dead. Dead, dead, dead!" Scalia said, drawing laughs from the crowd. "No, I don't say that. ... I call it the enduring Constitution. That's what I tell them." 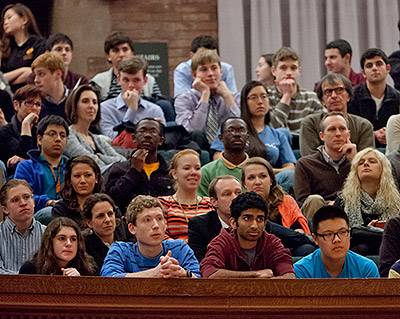 The audience listens intently as Scalia answers questions on a range of topics, from the importance of the Constitution's structure to his rhetorical choices in writing judicial opinions.

Though it has the illusion of flexibility, the living Constitution creates new restrictions or decisions that must be lived by across the country, rather than laws enacted state by state. And the results are not always liberal or conservative, Scalia said, offering examples of two cases declaring statutes unconstitutional (with Scalia dissenting), one favored by liberals regarding discrimination based on sexual preference, and the other favored by conservatives regarding excessive punitive damages in civil cases.

This morphing view of the Constitution, Scalia said, has two practical problems. The first, he said, is a question of legitimacy; the Constitution does not say that the Supreme Court should decide the "evolving standards of decency" in society, a task better suited to the Congress.

"Why would you think these nine unelected lawyers living in a marble palace have their thumb on the pulse of the American people so that they know what the evolving standards of decency are? I don't know what they are. I'm afraid to ask," Scalia said.

The second argument, Scalia said, is that the text and its original meaning are the only objective standards to which all judges can be held.

Imagining a student challenging a professor who believes in the living Constitution, Scalia said: "If you show Scalia this is what the Constitution originally meant, you got him. He's handcuffed. He can't do the nasty conservative things he would like to do to the country." 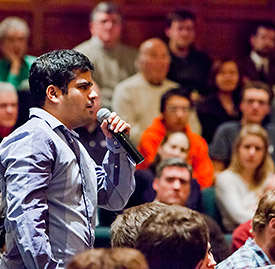 Neel Sukhatme, a graduate student in economics, asks a question about how to interpret the original intent of the Constitution during the 30-minute question-and-answer session after Scalia's talk.

After he finished his remarks, Scalia took questions from students in the audience, covering topics including how he discerns the original intent of a broad phrase such as "equal protection," ruling on religious freedom and the federal government's powers regarding drugs, health care and eminent domain.

In an exchange that drew applause for the question and the response, freshman Duncan Hosie asked Scalia about his mentions of murder, polygamy, cruelty to animals and bestiality in his dissents in cases regarding gay rights. Hosie, who identified himself as gay, said he found the comparisons offensive.

"Do you think it's necessary to draw these comparisons, to use this specific language, to make the point that the Constitution doesn't protect gay rights?" he asked.

"I don't think it's necessary, but I think it's effective," Scalia said. "It's a type of argument that I thought you would have known, which is called a reduction to the absurd. And to say that if we cannot have moral feelings against homosexuality, can we have it against murder, can we have it against these other things? Of course we can. I don't apologize for the things I raised. I'm not comparing homosexuality to murder. I'm comparing the principle that a society may not adopt moral sanctions, moral views, against certain conduct. I'm comparing that with respect to murder and that with respect to homosexuality."

Based on states' efforts to pass laws restricting the use of eminent domain after a Supreme Court decision upheld its constitutionality, another student asked, "Do you think there's any hope for federalism?"

After the event, freshman Miranda Rehaut praised the talk.

"I loved it. It was incredibly interesting. I didn't quite expect Scalia to have the personality that he did," said Rehaut, who plans to major in the Woodrow Wilson School of Public and International Affairs. "My freshman seminar this semester is on election law, and I just came from that today, so it was really interesting going from reading his decisions to then hear him talk."

Polly Strauss, a University employee who attended the talk with her son Ben, commended Scalia's easy-to-grasp explanations of his judicial philosophy.

"Even though I may not often agree with him, I think I would always love to discuss different views and hear his point of view and how he discusses them. Always," said Strauss, project manager for the Tikvah Project in Jewish Thought in the Judaic studies program.