Former Supreme Court Justice John Paul Stevens discussed his stance on several hot-button issues, the personal rapport justices have with one another and what drew him to the legal profession in a well-attended public discussion at Princeton University with Provost Christopher Eisgruber, Monday, Oct. 10.

At age 91, Stevens spoke fluently about the specifics of dozens of Supreme Court opinions, both recent and decades old, with Eisgruber, the Laurance S. Rockefeller Professor of Public Affairs in Princeton's Woodrow Wilson School of Public and International Affairs and the University Center for Human Values, who served as a law clerk for Stevens from August 1989 to July 1990. Stevens retired from the Supreme Court in 2010 after serving as a justice for 34 terms, having written 1,400 opinions, roughly half of them dissents.

The event, titled "The Court, the Constitution and the Justice from Illinois: John Paul Stevens in Conversation with Provost Christopher Eisgruber," was held in a packed Richardson Auditorium in Alexander Hall. The Walter E. Edge Lecture and the John Marshall Harlan '20 Lecture in Constitutional Adjudication, it was presented by the Princeton University Public Lectures and the Program in Law and Public Affairs (LAPA). 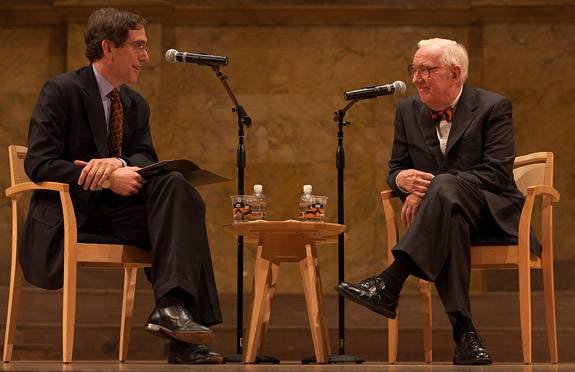 Former Supreme Court Justice John Paul Stevens (right) discusses his 34 years on the court with one of his former clerks, Princeton University Provost Christopher Eisgruber, on Monday, Oct. 10, at a public event on the Princeton campus. (Photo by John Jameson)

Commenting on one of the court's most well-known recent cases, Bush v. Gore, which decided the 2000 election, Stevens called the decision "quite wrong."

"I thought it threatened the public perception of the court as an impartial adjudicator," he said.

When asked about the advice he would give to a state legislator trying to create a constitutional death penalty statute, he called capital punishment "a tremendous misuse of finite resources of the state. In my judgment, having thought about it for many years, it does more harm than good." 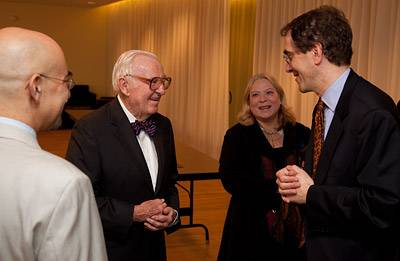 Before his appearance in Richardson Hall, Stevens chatted with, from left, David Spergel, the Charles A. Young Professor of Astronomy on the Class of 1897 Foundation; Kim Scheppele, the Laurance S. Rockefeller Professor of Sociology and Public Affairs and director of the Program in Law and Public Affairs; and Eisgruber. (Photo by John Jameson)

Stevens also spoke of the composition of the nation's highest court. It has increasingly become dominated by Ivy League graduates from the East Coast who have served as judges, Eisgruber said. "I do think the court would benefit from broader geographic diversity" and other kinds of diversity, said Stevens. "On the other hand, I do think recent appointments have been imminently well qualified ... so I have mixed feelings. We do miss something when we don't have a little more variety of experience than just all former judges."

But he had praise for his former colleagues. "It's a very nice place to work. Despite the fact that opinions frequently contain strong language, there's never been a time when I've been there that I couldn't talk to another member of the court on the other side about the merits of a case. I think all members of the court like and actually respect one another."

Stevens had planned to become an English teacher, but a letter he received from his older brother while Stevens was serving in the Navy "explaining the joys of legal work" changed his mind. The letter, which described "the opportunity to help others who need help," sparked his interest in going to law school. 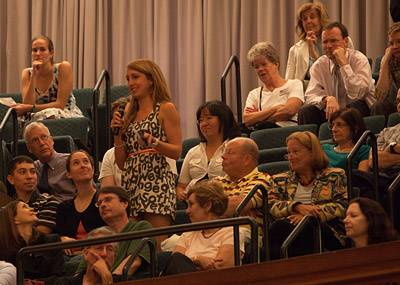 Sophomore Kellen Heniford, who is considering going to law school, was one of several students who posed questions to the former justice. She is planning to read his new book, "Five Chiefs: A Supreme Court Memoir," over fall break. (Photo by John Jameson)

The audience that filled the auditorium had some longtime admirers of Stevens, including former Princeton graduate student Monica Pham, who wore a T-shirt that said, "I (heart) JPS," which she had made in law school. "I thought he was fantastic, everything I knew he would be," she said after his appearance.

In closing, Eisgruber asked Stevens, "Are you optimistic about the future of the court and the Constitution?" Stevens's answer was an emphatic "yes."

"To hear a former justice's opinions -- you can't get closer to the truth than that," said freshman Adam Tcharni.

Sophomore Kellen Heniford, who is considering going to law school, said, "I love that he has such a great sense of humor. That doesn't come out in his opinions." She is planning to read his new book, "Five Chiefs: A Supreme Court Memoir," over fall break, Heniford said.

On Tuesday, Stevens will meet with undergraduate and graduate students who are affiliated with LAPA, which explores the role of law in constituting politics, society, the economy and culture.

Stevens received an orange-and-black striped bowtie -- Princeton's colors -- from Troy McKenzie (right), a member of Princeton's Class of 1997 and a former clerk for Stevens, who donned the bowtie for his appearance. They were joined by Deborah Pearlstein, another former Stevens clerk and a former visiting scholar at Princeton, and Eisgruber (in background). (Photo by John Jameson)