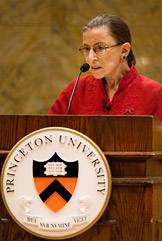 U.S. Supreme Court Justice Ruth Bader Ginsburg provided an inside look at the venerable institution during an address in Richardson Auditorium on Oct. 23. The event began with an address titled "On the Lighter Side of the U.S. Supreme Court: Customs and Habits That Promote Collegiality Among the Justices," in which she described everything from casual conversations to birthday parties.


An archived webcast of the event will be available for viewing at a later date.

U.S. Supreme Court Justice Ruth Bader Ginsburg provided a rare inside look at the human side of the venerable institution in an appearance Thursday at Princeton University, giving the audience a peek at the personal interactions of the justices and how they maintain friendships despite disagreeing on issues.

Ginsburg, who has been a justice since 1993, also spoke about the tension at the court while it considered Bush v. Gore, the decision that settled the 2000 presidential election, and offered her view that the court may have overstepped in its ruling on Roe v. Wade, the landmark decision regarding abortion. 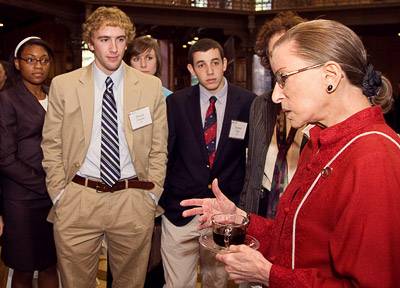 Before her lecture and conversation with Provost Christopher Eisgruber, Ginsburg met with students in the Program in Law and Public Affairs in Chancellor Green.

Her talk was titled "On the Lighter Side of the U.S. Supreme Court: Customs and Habits That Promote Collegiality Among the Justices." After her speech, held at Richardson Auditorium in Alexander Hall, she participated in a conversation with Princeton Provost Christopher Eisgruber.

Gatherings of the justices "begin with handshakes," Ginsburg said. "Thirty-six of them, to be exact. Before each day that court begins and before each conference discussion, as we enter the robing room or the conference room, we shake hands, each justice with every other. It's a way of saying, 'Even though you circulated that nasty dissent yesterday, we're in this together and we better get along with each other.'"

The justices have lunch together every day when they are hearing arguments or meeting to discuss cases, "not because it's an obligation but by choice. Usually there are seven or eight of us, and not infrequently all nine." Invited guests have included National Security Adviser Condoleezza Rice, former Secretary-General of the United Nations Kofi Annan and former Federal Reserve Chairman Alan Greenspan. Retired Justice Sandra Day O'Connor often stops in as well when she's in town.

Birthdays are celebrated with a pre-lunch toast and singing, which is led by Justice Antonin Scalia "because between us he is the only one who can carry a tune," Ginsburg said. The cake is often baked by her husband, Martin Ginsburg, a professor of law at Georgetown University Law Center and a master chef. Conversation sometimes turns to the performance of the lawyers who have appeared before them, or to the latest exhibit at the National Gallery of Art in Washington, D.C.

"As you no doubt have noticed, we have sharp differences on certain issues …," she said. "But through it all, despite our sometimes strong differences, we remain good friends and people who respect each other and genuinely enjoy each others' company."

Ginsburg is the second woman to serve on the court. Prior to her appointment, she was a judge of the U.S. Court of Appeals for the District of Columbia Circuit for 13 years. In 1971, she was instrumental in launching the Women's Rights Project of the American Civil Liberties Union. Ginsburg has been a professor of law at Rutgers University School of Law and Columbia Law School.

The address was followed by a conversation between Ginsburg and Eisgruber. She talked about such decisions as Bush v. Gore and Roe v. Wade.

In her discussion with Eisgruber, who has written several books on the Constitution and the Supreme Court, Ginsburg talked about the Bush v. Gore decision, on which she dissented. "It's never been cited by the court (since 2000)," she said, "and I don’t think it ever will be." She agreed with Eisgruber when he mentioned that he had told his students he thought the court would not take up the case. "I would have made the same prediction: The court won't touch this with a 10-foot pole," she said.

Recalling those high-pressured days, Ginsburg remarked, "You can imagine how tense things were. ... Everyone was exhausted." One night at 9 p.m. she got a call from Scalia. "He said, 'Ruth, what are you doing still at the court? Go home and take a bath.' I treasure the relationship we have, though we disagree on many issues." 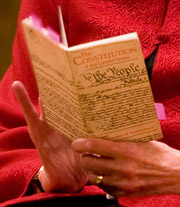 As she examined a small booklet with the text of the Constitution, she described her "favorite provision:" the end of section one of the 14th Amendment. She read aloud from it. "... (N)or shall any state deprive any person of life, liberty or property, without due process of law; nor deny to any person within its jurisdiction the equal protection of the laws."

On Roe v. Wade, which was decided in 1973, Ginsburg reiterated her previous criticism of the ruling. A strong supporter of abortion rights, Ginsburg nevertheless said the court "bit off more than it could chew." A more incremental decision "would have been an opportunity for a dialogue with the state legislators" and a chance for states to take the lead on the issue.

Asked about the confirmation hearings for Supreme Court justices, Ginsburg said she was disturbed by their partisanship. "The practical truth ... is the hearings nowadays are more a show for the members of the (Senate) Judiciary Committee than they are testing for the nominee. They come with a brilliant question, but they have no follow-up questions."

Ginsburg recalled how much less rancorous her own nomination process was. Before putting forth her name, she said, President Clinton, a Democrat, "called Sen. (Orrin) Hatch and said, 'Orrin, I am thinking about nominating Ginsburg,'" she said. As a result, Hatch, a Republican, was "almost my cheerleader at my hearing."

Looking back on 15 years on the court, Ginsburg described the experience as "ever challenging, enormously time-consuming and enormously satisfying." She later added, "I have gotten tremendous satisfaction helping make things a little better for a person or a community." 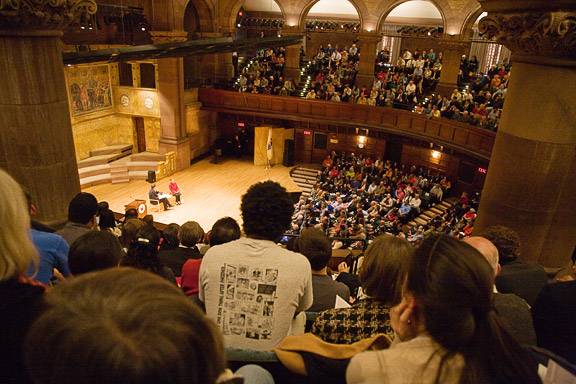 Richardson Auditorium in Alexander Hall was filled with students, faculty, staff and members of the community to hear Ginsburg speak.

Students who attended the event said that hearing from Ginsburg gave them a view of the court they had not found in textbooks.

"It really humanized the court," said sophomore Abby Bowman. "It paints a much more complete picture."

"I got a feel for the institution as a group of people, rather than just scholars," said sophomore Vishal Chanani.

"What stood out was the importance of precedent -- the ramifications of what you do now for the future," said senior Mike Wang. 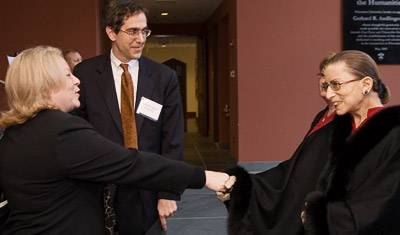 Ginsburg was greeted by, from left, Kim Scheppele, director of the University's Program in Law and Public Affairs, and Provost Christopher Eisgruber when she arrived on campus.

The event was sponsored by the Program in Law and Public Affairs and the University Public Lectures Series. Ginsburg's appearance was this year's John Marshall Harlan '20 Lecture in Constitutional Adjudication, which celebrates the legacy of Harlan, one of nine Supreme Court justices to graduate from Princeton. The event also was supported by the Walter E. Edge Lecture Fund, which brings American and international public leaders to speak on campus.