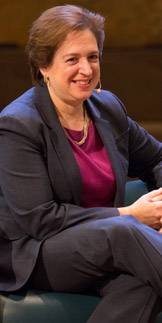 In a conversation peppered with humor and warmth, Elena Kagan, an associate justice of the U.S. Supreme Court and a member of Princeton's Class of 1981, offered insights into her time at the University, the workings of the court and her legal philosophy on Thursday, Nov. 20, at Richardson Auditorium.

Kagan, who said she was returning to campus for the first time since her 25th reunion eight years ago, engaged in a discussion with President Christopher L. Eisgruber, a renowned constitutional scholar, before answering questions from students and other members of the audience. The event, with around 750 people in the audience, was the highlight of a day of activities for Kagan on campus, and was sponsored by the University Center for Human Values and the Public Lecture Series.

Asked by Eisgruber to recall her time at Princeton, Kagan emphasized the generosity of the faculty with their time, the importance of extracurricular activities to her experience and the lifelong friendships she formed.

"I just thought this was the greatest place," said Kagan, who majored in history. "I feel very, very warmly about it and warmly about all it did for me."

"Did it ever occur to you while you were here that you might want to be a Supreme Court justice?" Eisgruber asked.

"No, I didn't really have that thought," Kagan said, drawing laughter from the audience.

Following her time at Princeton, Kagan received an M.Phil. from the University of Oxford in 1983 and a J.D. from Harvard Law School in 1986. Between 2003 and 2009, she served as the dean of Harvard Law School. In 2009, President Barack Obama nominated her as the solicitor general of the United States. After serving in that role for a year, the president nominated her as an associate justice of the Supreme Court on May 10, 2010. She took her seat on Aug. 7, 2010. 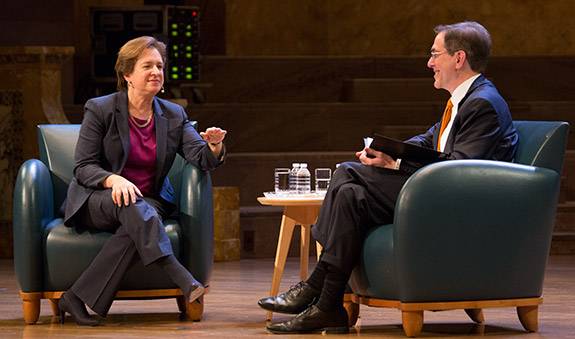 During the lively conversation, Kagan describes the Supreme Court as "a great institution" and emphasizes the collegiality of the court.

Behind the scenes at the Supreme Court

As the discussion moved to the topic of the Supreme Court, Kagan emphasized the collegiality of the court. As an example, she mentioned that the first call she received following the Senate vote on her confirmation was from Chief Justice John Roberts, who was calling from Australia, where it was around 3 a.m.

"The warmth with which I was greeted by all my colleagues was really striking to me," she said.

Still, being the junior justice on the court brings its own challenges, she said. When the justices meet to discuss cases, she must take notes and answer knocks at the door, she said. And one of her less plum assignments: serving on the court's cafeteria committee.

Kagan, who described the court as "a great institution," noted how little the court changed between her time serving as a clerk to Justice Thurgood Marshall and her return as a justice herself. Correspondence between justices, she said, still usually takes the form of hand-delivered memos.

"Email has not quite hit the U.S. Supreme Court," she said, again drawing laughs.

Approach to the law

In response to a question from Eisgruber about her judicial philosophy, Kagan said she doesn't think of herself as "a grand philosopher."

Eisgruber asked how Kagan approaches the Constitution's equal protection and due process clauses.

While some parts of the Constitution are perfectly clear, the equal protection and due process clauses "speak in such abstract, even vague terms," Kagan said. 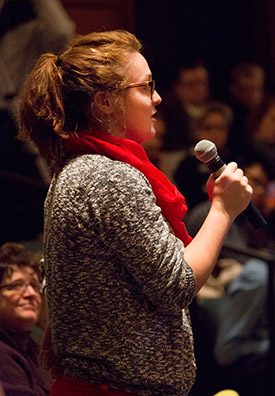 Freshman Kennedy O'Dell asks Kagan about her toughest case as a justice. O'Dell said Kagan's description of her struggles with a case over violent videogames helped humanize the courts.

One approach is to try to figure out what the drafters of the Constitution thought the language meant, Kagan said. But, she said, that leads to untenable results.

"I myself am a big precedent person," Kagan said. "I'm kind of what some people call a common-law constitutionalist. I think really hard about how the way of interpreting the due process or equal protection clause has developed over time in case after case after case and try to think about the principles that have emerged in all those cases."

Asked about perceptions that the court is more polarized today along liberal and conservative lines, Kagan said it's first important to note how often the justices agree.

"We actually agree an incredible amount of the time. It's hard to get nine people to agree to anything," she said. "Last year, all nine of us agreed 60 percent of the time. Sixty percent of our opinions were unanimous, which is really something because we only decide the hardest cases."

Still, she said, the court does split along predictable lines in about 10 of the 80 cases it hears each year — and often in the most high-profile cases.

Despite that split, Kagan said she doesn't think politics are the driving factor for reaching agreement. 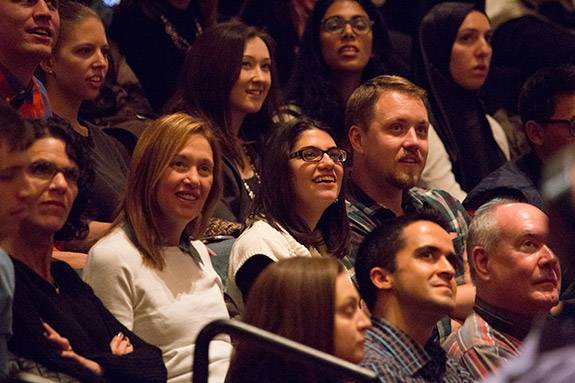 Questions from the audience of 750 touch on the influence of foreign or international legal decisions on the court, the frustration of being on the losing side of a case and whether justices pay attention to what academics write about the court.

Questions for the justice

During the question-and-answer session with the audience of about 750 people, Kagan addressed topics including the influence of foreign or international legal decisions on the court, the frustration of being on the losing side of a case and whether justices pay attention to what academics write about the court.

Kennedy O'Dell, a freshman who is considering majoring in the Woodrow Wilson School of Public and International Affairs, asked Kagan about the toughest case she has handled on the court.

Kagan pointed to a case about a California law that prohibited the purchase of violent videogames by children without their parents' permission.

"This was one case I was all over the map on," Kagan said. "Every day I woke up I thought a different thing."

In the end, she said, she felt the law couldn't be reconciled with the First Amendment.

"Hearing about her moral struggle with violent videogames reinforced the humanity of the courts for me," O'Dell said after the event. "So often, I find myself thinking of the justices as perfectly objective people or partisan bickerers, but never as humans. It is easy to forget that they are people."