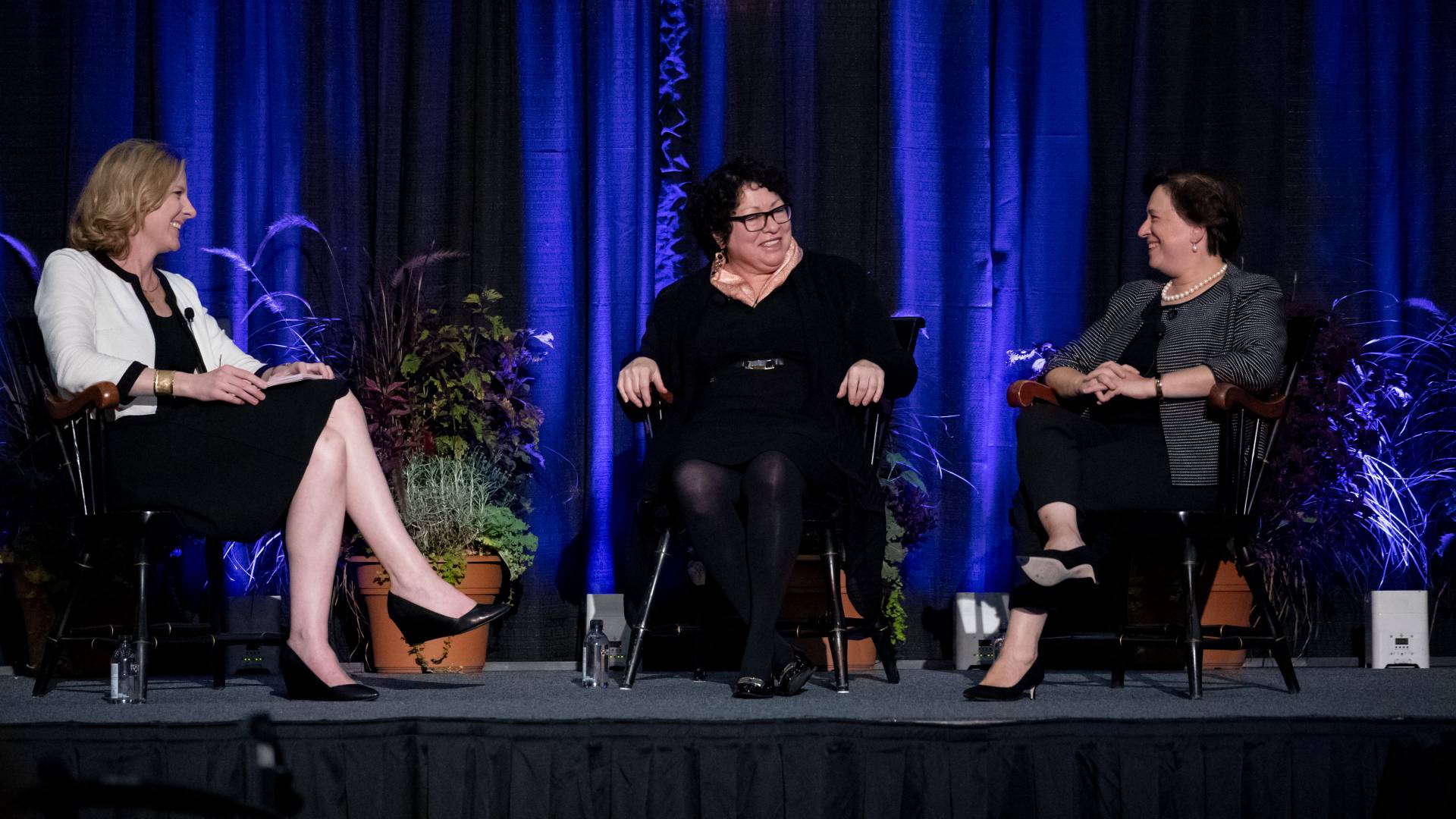 U.S. Supreme Court Justices Sonia Sotomayor ’76 (center) and Elena Kagan ’81 (right) join in conversation with Dean of Yale Law School Heather Gerken ’91 in a packed Jadwin Gym on the evening of Friday, Oct. 5, during the “She Roars” alumni conference.

U.S. Supreme Court Justices Sonia Sotomayor and Elena Kagan have much in common. They are among the four women who have served on the high court. They are from New York City. And they both went to Princeton University.

They recalled Princeton’s influence on their lives — from their undergraduate days to their legal careers — with fondness on Friday during the conference “She Roars: Celebrating Women at Princeton.” About 3,000 alumni filled Jadwin Gymnasium for the conversation between Sotomayor, Class of 1976, and Kagan, Class of 1981.

“[Princeton] was so transformational for me,” said Sotomayor, recalling arriving on campus from the South Bronx as a first-generation student. “It opened the door of opportunity to me. … I didn’t really understand what it meant to come to a place like Princeton and all of the changes it would create in me. How much I would grow up not only in my writing skills and my thinking skills, but in my life skills. I was able to get along with people who are so vastly different than me. That is my enduring gift from Princeton.”

Kagan said Princeton forced her to think of issues and problems in different ways. “To really push and challenge myself … that is something that has been enormously helpful throughout my career,” she said. 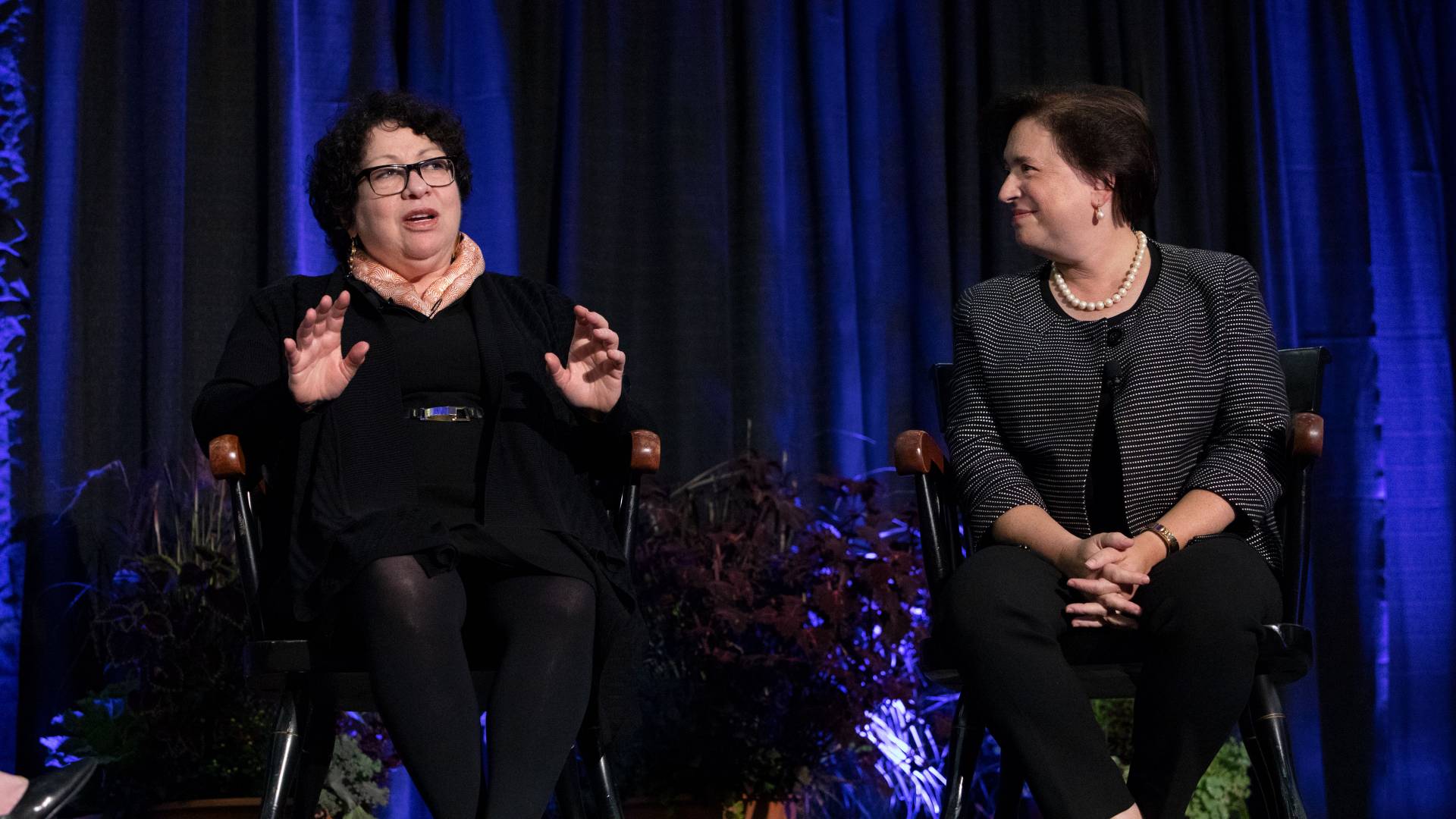 Sotomayor and Kagan talked about attending Princeton, mentorship, rituals of the Supreme Court — and what they do for fun.

The justices' conversation was moderated by Heather Gerken, Class of 1991, a former University trustee and dean of Yale Law School. Gerken posed questions alumnae submitted in advance. Topics ranged from career advice, mentorship, the experience of being a woman on the Supreme Court, political partisanship, and what the justices enjoy in their free time.

Noting the Supreme Court is seen as a neutral arbiter, Gerken asked the justices how they view their roles given divisiveness in the country today. 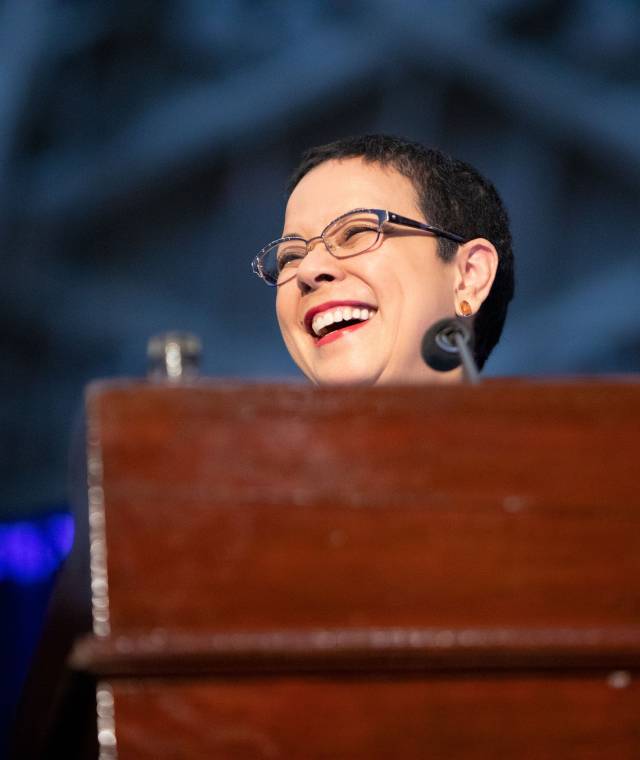 Kagan said it’s important for the Supreme Court to uphold its reputation as fair, impartial and neutral and not an extension of the “terribly politically polarized process that we live in.”

She noted former justices Sandra Day O’Connor and Anthony Kennedy were seen as centrists, with people unable to predict which side they would take on a decision. She said it’s “not so clear” whether the court will continue to have that “sort of middle position.”

“What I think people don’t realize is that we agree on a lot,” Kagan said. “But there are some important issues that people care about in which the court is more closely divided.”

Given the weight of their work, Gerken asked how Supreme Court justices maintain collegiality.

“We have lunch in the dining room," Kagan said. "There are rules that you can’t talk about cases. So we get to know each other’s families. We talk about books or movies or sports."

Sotomayor said she approaches her colleagues like anyone else in her life.

“I try to find the good in everybody. If you start from the proposition that there is something good in everybody, it is a lot easier to get along with them even when you disagree vehemently,” Sotomayor said. “I tell people often Justice Clarence Thomas knows every employee in our building. He not only knows their names but knows their family members. If someone gets ill, he is the first one to reach out and offer help.” 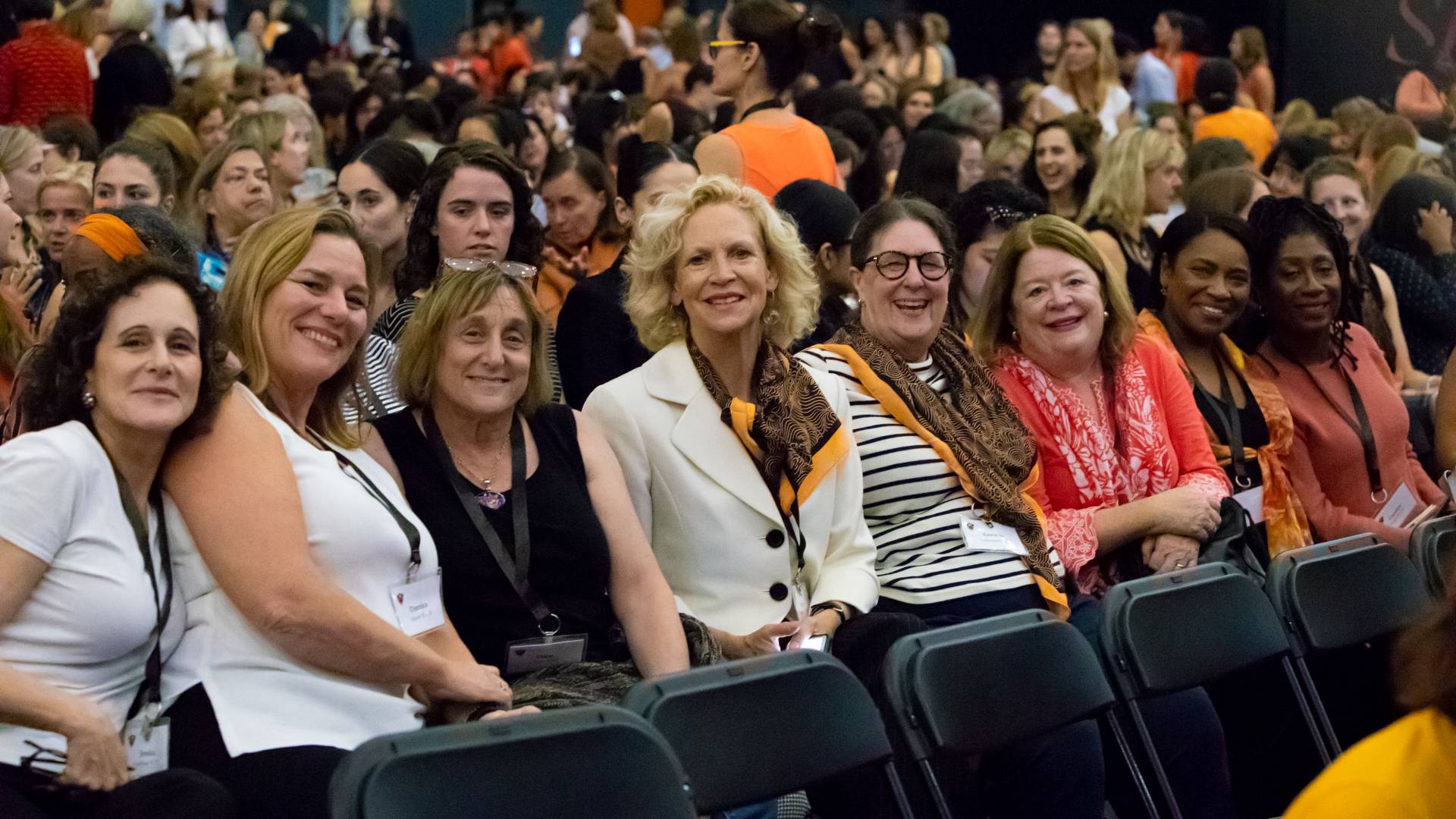 Members of the Class of 1981 fill the row in support of their classmate Kagan.

Gerken asked what it was like for Sotomayor and Kagan to often be “the only woman in the room.” She noted that Kagan was the first woman dean of Harvard Law School.

“You can’t be a professional woman, even today whether it’s in law, medicine, any field, without having a moment where someone is going to treat you differently because you are a woman,” Sotomayor said.

However, both justices said there were men along their career paths who mentored and supported them.

“I think it is important for women to understand that no matter how hostile an environment may seem, you have to look around to find those people who will stand by you and with you,” Sotomayor said. “We still have a long way to go but it is a lot shorter distance than when I started out.”

Sotomayor and Kagan also thanked their respective faculty mentors at Princeton, including two sitting in the audience: Sean Wilentz, the George Henry Davis 1886 Professor of American History, and Nancy Weiss Malkiel, professor of history emeritus and former dean of the college. 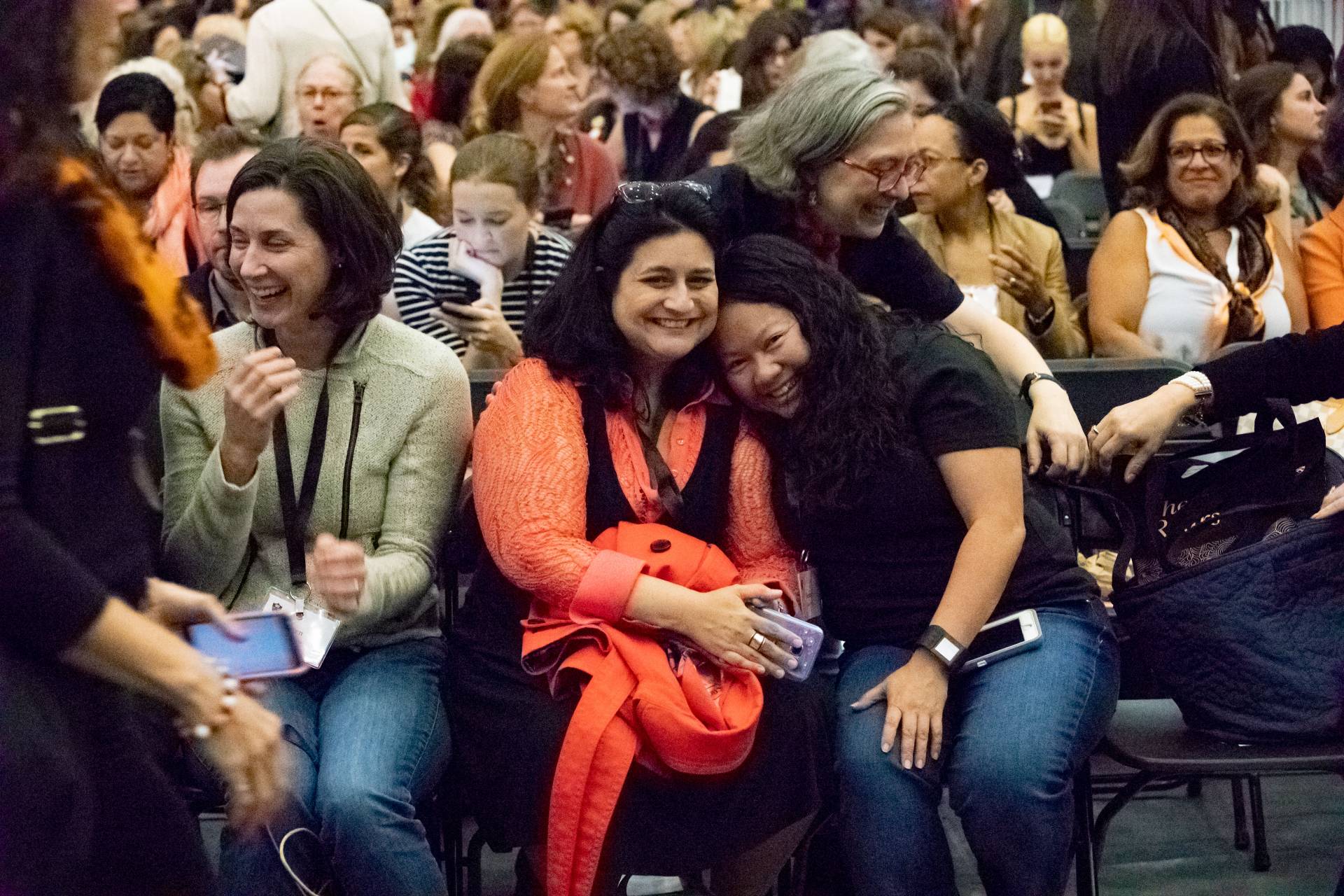 Some 3,000 alumni enjoyed the conversation, which was filled with anecdotes and personal reflections.

And to the alumnae in the audience, the justices offered their own words of wisdom.

“Learning is a lifelong endeavor,” Sotomayor said. “If you make a wrong choice, pick yourself up and move in a different direction. … Look at the opportunities you have at a place like Princeton. It won’t be valuable unless you are willing to take chances and do those new things that scare you.”

As the conversation concluded, the audience stood and applauded. As University General Counsel Ramona Romero said in her introductory remarks, the alumnae were grateful for Sotomayor and Kagan’s service to the American people and for sharing their unique experiences with fellow Princetonians.