She started spreading smiles the moment she stepped off the Dinky train.

"The Dinky conductor asked her for a selfie with him, and she happily obliged," said Kristy Allenby Catsouphes, a 2005 alumna from Boston, who saw comedienne and actress Ellie Kemper arrive on campus Saturday just hours before her closing keynote address of the "She Roars" alumni conference. "Then Ellie went into the new WaWa and was immediately surrounded by Princeton students asking for photos with her. She posed with each and every one." 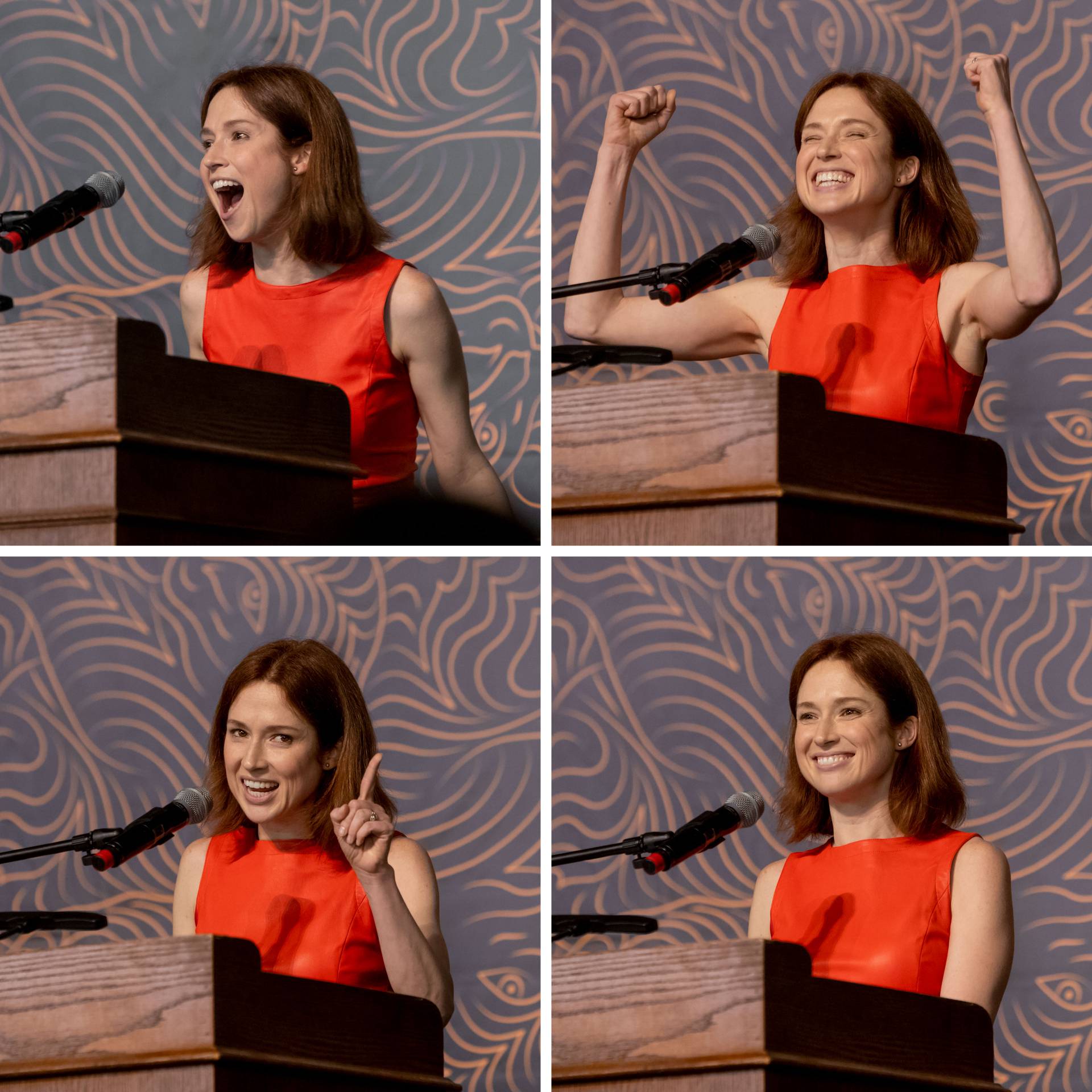 With high energy and humor, comedienne and actress Ellie Kemper, a 2002 alumna, entertains the audience at the "She Roars" alumni conference — held Oct. 4-6 on campus — with memories of her time at Princeton and stories of "how fortunate I have been to work with strong women."

Kemper, a 2002 alumna from St. Louis, is best-known as the sunny dispositioned Kimmy — a Midwest transplant whose naiveté and boundless positivity charm even the most hardened New Yorkers as she navigates life in the Big Apple on the Netflix comedy "Unbreakable Kimmy Schmidt," created by Tina Fey and Robert Carlock.

At the "She Roars" closing reception and dinner at Jadwin Gym, the air was charged as the hundreds of attendees — many wearing the elegant tiger-printed scarf created especially for the conference — enjoyed one last evening of celebration. Kathryn Hall, a 1980 alumna and chair of the Board of Trustees, welcomed everyone from the stage, which was flanked by two large screens showing an ever-changing grid of social media posts from the weekend with the hashtag #SheRoars18.

"I'm sure you agree the program has been incredible," Hall said of the three-day conference, which featured more than 90 events and more than 200 presenters. She said the festivities presented opportunities "to tell your own stories and to renew old friendships and rekindle new ones. Princeton is a place that refuses to stand still."

After dinner, Kemper was introduced by her friend and classmate Aili McConnon, a writer for The New York Times and The Wall Street Journal.

As Kemper stepped up to the microphone, her sparkling eyes scanning the audience, she deadpanned: "I feel like I'm getting married. Or maybe at my funeral," eliciting whoops, howls and giggles from the audience. Then she paused, swiftly turned her back to the audience and whipped out her cellphone. Holding it high above her head, she pronounced, "I want to take a selfie" — which she did.

"I want to start my remarks by apologizing. I know women say 'I'm sorry' way too much," she said, which only made the audience laugh more. She apologized that her friend Aili wasn't the speaker — noting that McConnon's book "Road to Valor," about the Italian cycling legend Gino Bartali, who secretly saved Jews in Italy during WWII, is being optioned by a major film company and she also has a young child at home, among many other accomplishments. "I'm also sorry that as I take the podium, all the academic engagement that we've all been enjoying over the weekend is about to come to a screeching halt," she said.

In her signature self-deprecating tone, Kemper implored the audience: "Why did the organizers ask me?" She wondered: "Was it my thesis? Had my undergraduate thesis finally earned the recognition it deserved? It must have been the brilliant title: 'Isn't It Ironic?' — which is also the title of an Alanis Morissette song."

Kemper said she felt compelled "to provide some insight that other speakers had not provided, to settle the dispute for who was the very best speaker at 'She Roars.'" She had contemplated random topics that might be of interest — the best snacks at the craft-service table on movie and TV sets, for example, or her favorite SoulCycle instructors, or Lady Gaga — "but none of those topics seemed good. So instead I'm going to talk about how fortunate I have been to work with strong women."

She said her "good fortune" started with her mother, Dorothy Jannarone Kemper, a 1972 Princeton alumna. "My mom set the standard for how a woman should behave in the world. ... She's strong, opinionated and cheerful." 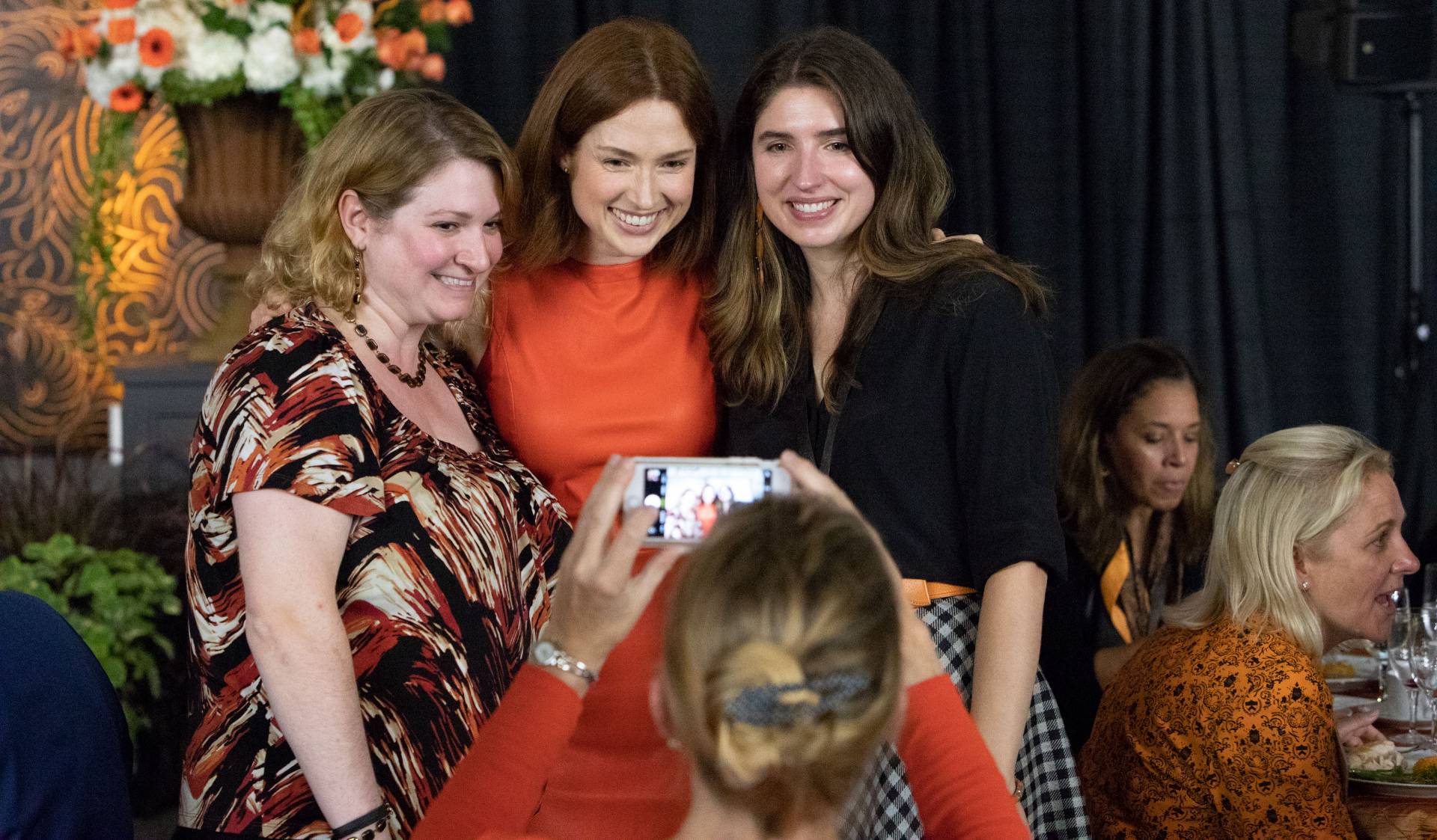 Kemper (center) poses for a photo with classmates Elizabeth Greenberg (left) and Juliet Hernandez (right) before the dinner.

When Kemper met McConnon at Princeton on an August day, shortly before classes commenced their first year — for field hockey pre-training — they bonded immediately; then Kemper met another strong woman, field hockey coach Beth Bozman. "Rumor had it she'd had 14 knee replacements, all on one knee," she said. Reading an excerpt from her forthcoming memoir, "My Squirrel Days," which will be published Oct. 9, Kemper recounted knocking on Bozman's door and asking her about why she hadn't been given more playing time on the field. "I asked her what specific skills I needed to work on. She said: 'All of them.'"

Kemper took this admonition in stride — she quit field hockey and auditioned for Quipfire! and Triangle Club. She learned "that women are at their best when they are helping other women. We listen to one another." At Princeton, she said, "I met too many young, inspiring women to count. The ladies I befriended in college remain some of my closest friends today. I've also had the privilege of working with some of the most talented women in my industry." 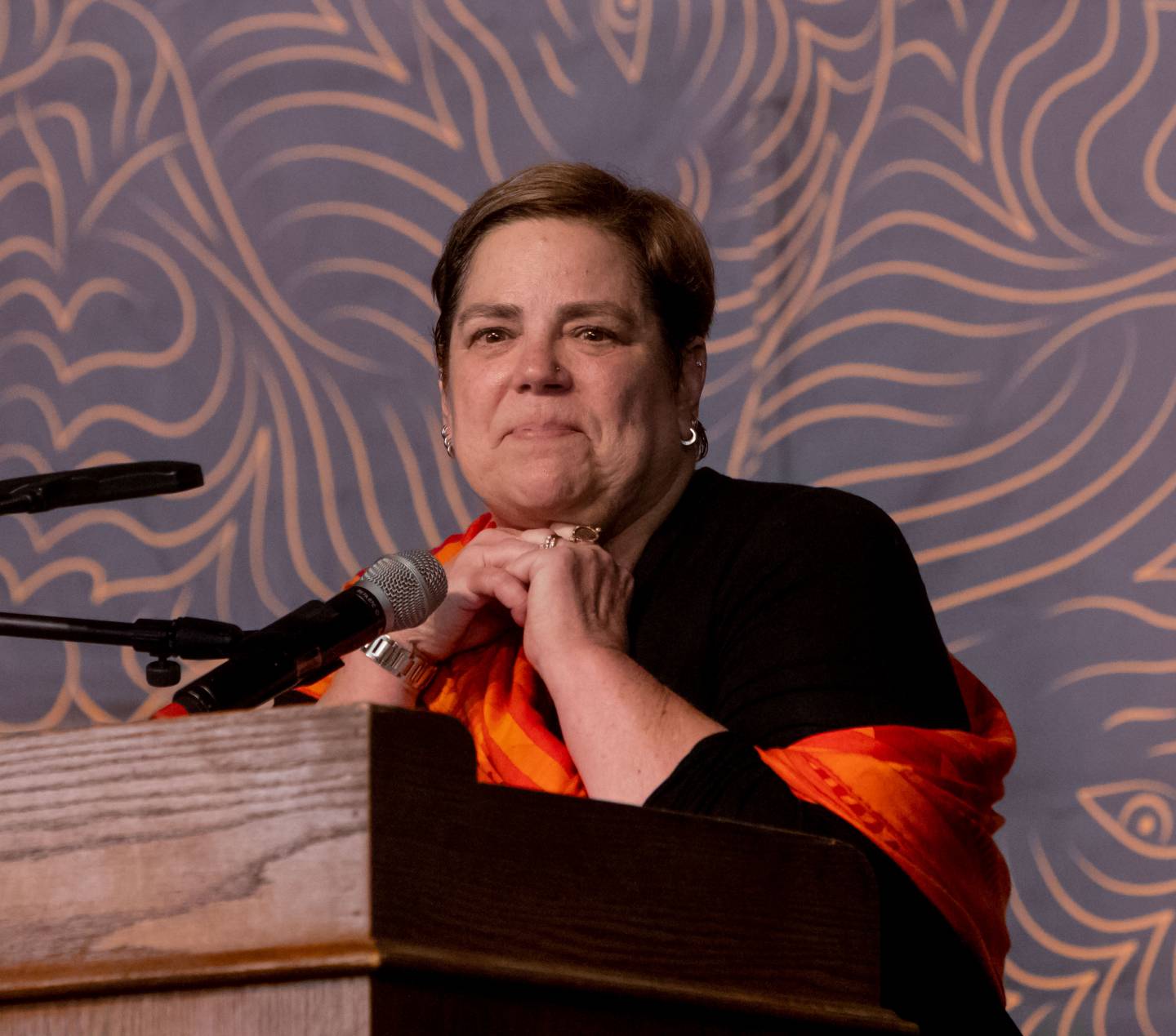 Kathryn Hall, a 1980 alumna and chair of the Board of Trustees, notes the three days of festivities presented opportunities "to tell your own stories and to renew old friendships and rekindle new ones."

Kemper got her big break when she landed the role of Erin Hannon on the American version of “The Office.” She has also appeared in the films “Bridesmaids,” “21 Jump Street,” “Laggies” and "Sex Tape," and voices the character Crackle in the Disney animated series “Sofia the First.”

She noted that in interviews she is often asked, '"What is it like having Tina Fey as a boss?"

"I don't know how to answer that question," Kemper said. "They don't ask me what it's like having Robert Carlock as a boss. They want to know what it's like having a woman as a boss. ... Tina is respectful and asks about people's families. She never yells. She once came to my dressing room and asked me about SoulCycle, and who the best instructors were. I couldn't help thinking about how little time she had ... but she asked me this because she knew it would put me at ease. She is the absolute emblem about what it is to be a female boss and a boss in general."

Kemper's tone grew serious. "It has been a difficult week ... it occurred to me that one of the most important things we can do right now is to celebrate all the phenomenal women in our lives. We need to roar," she said, then paused, opened her mouth wide and roared for several seconds. She gestured to everyone to join in. A massive "ROOOOOAR" reverberated through the air. "It's cathartic. Does that feel better?" Kemper asked. "It feels better. I don't want to scream into a pillow anymore."

She directed her gaze at Princeton President Christopher L. Eisgruber, next to whom she was seated at dinner. "Thank you, President Eisgruber, for being so polite." Looking out at the audience, she deadpanned again: "I stepped on his foot. He's such a class act."

As the crowd gave Kemper a standing ovation at the end of her remarks, she called out: "Thank you to everyone. Thank you! Tigers roar! I want to thank every single person here serving up food, cleaning up, thank you for everything you've been doing."

In introducing Kemper, McConnon gestured for the audience to stand up. "Let's take an Amy Cuddy 'power pose,'" she said, referring to social psychologist and "She Roars" presenter Amy Cuddy, a 2002 graduate alumna. McConnon took a wide stance with her legs and bent her arms into a goal post position, fists clenched. Everyone leapt to their feet and followed suit, with much laughter.

Calling Kemper her first friend at Princeton, McConnon gave a running commentary for a hilarious slideshow of "pre-Instagram, no filter" snapshots of Kemper from her undergraduate days, a prescient tableaux of her comedic inclinations. In one photo, Kemper sported a pink plastic lei, a flannel shirt and "a skirt made out of what looks like the green paper they use at delis to dress up the meat," said McConnon, recalling that it was a Halloween costume. She noted that among all her warm memories of Kemper, "what sticks with me [is that] in her work she is ferociously creative, affirming the central role of women in comedy and the arts." 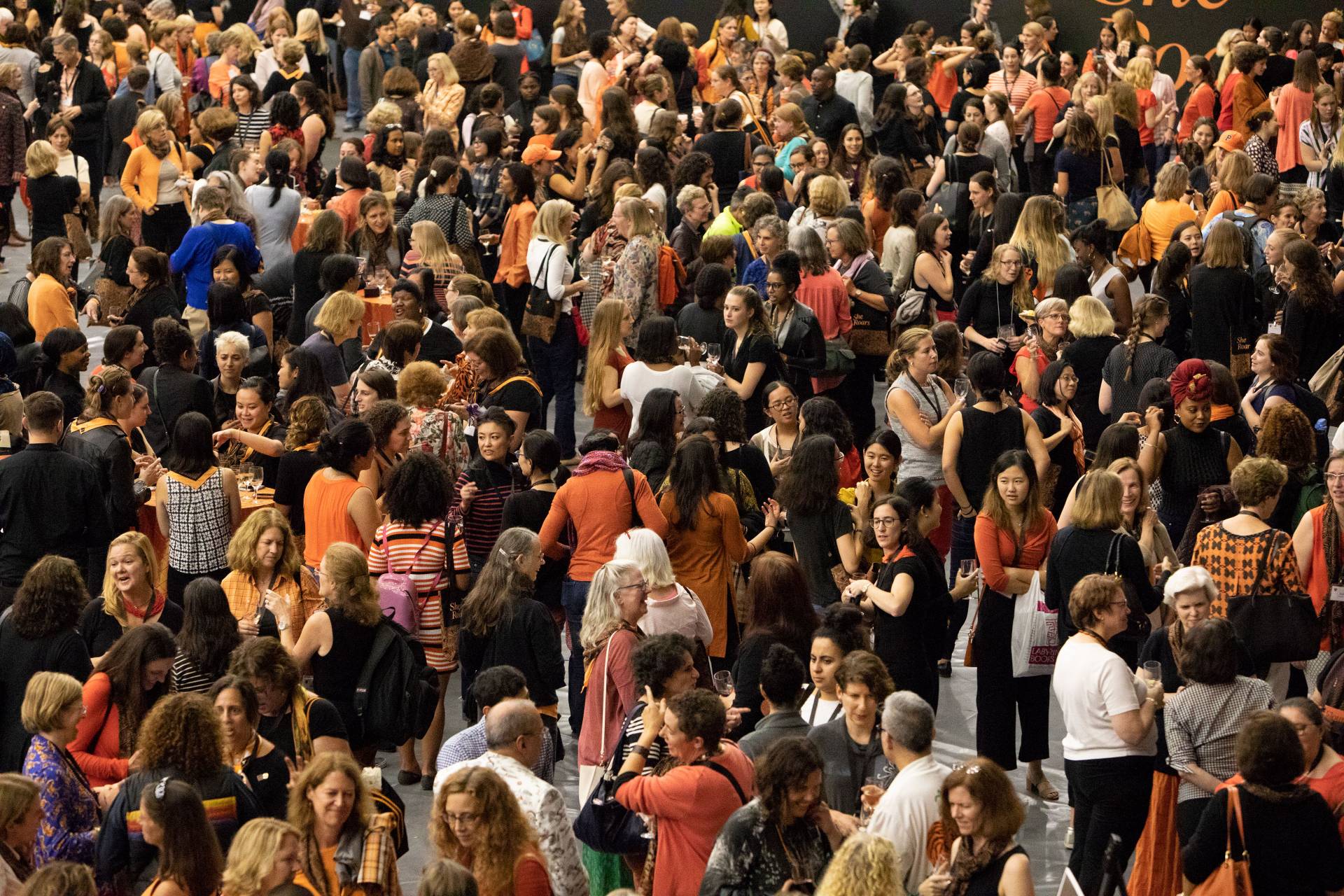 At the "She Roars" closing reception at Jadwin Gym, hundreds of attendees enjoy one last evening of celebration.

Long after the dinner, Kemper stayed on stage and posed for photos with alumnae in front of a huge "She Roars" backdrop.

On the way to the after-party, Lachlyn Soper-Lembke, a 2008 graduate alumna of the Woodrow Wilson School of Public and International Affairs, who had traveled from Stuttgart, Germany — where she is a senior conflict adviser for the Department of State — to join nine of her classmates for the conference, riffed on the word "heroes": "We have been so inspired by this weekend that we have vowed to keep the 'She Roars' energy going — with regular reunions of our own — to celebrate all the 'she-roes' who were presenters this weekend."

Kemper will return to campus June 3, 2019, as Class Day speaker. 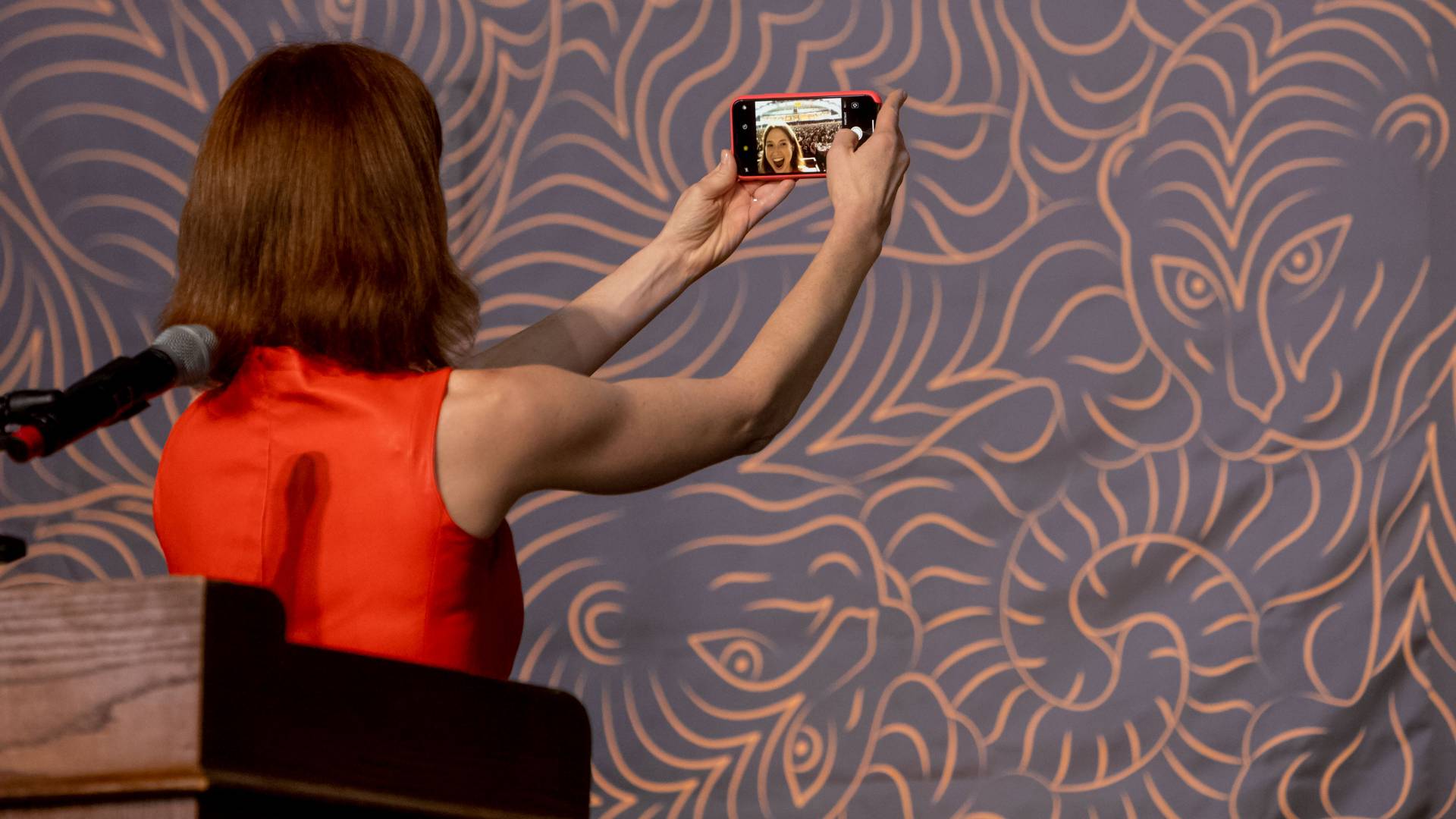 At the start of her remarks, Kemper spontaneously pauses to take a selfie with the crowd behind her.