EPA Administrator Lisa Jackson, a Princeton graduate alumna, called for a change in course in the American environmental movement in an address at Princeton on Friday, May 8. The new route centers around the idea of environmental justice, she said.

The American environmental movement needs to change and appeal to a broader audience if it is to make inroads into the set of problems facing the nation, according to Lisa Jackson, the administrator of the U.S. Environmental Protection Agency.

As the head of the country's lead agency for environmental issues, and in her heavily symbolic role as the first African American in that position, Jackson said she is ready to show the way. Her message of transformation centers around the idea of environmental justice. 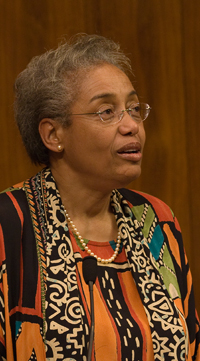 Jackson spoke to a crowd of students, faculty, staff and community members that filled Dodds Auditorium in Robertson Hall. She said her epiphany on the proper course of environmental activism came to her in the wake of Hurricane Katrina as she helped her mother, Marie Perez Rieras, cope with the loss of her New Orleans home and all its possessions.

While many spoke of a natural catastrophe, Jackson, with her trained eyes as a chemical engineer, focused on what she perceived as an environmental disaster. As she thought more about it, she realized that, in truth, her hometown had possessed serious environmental issues for years that had not been properly addressed. There was lead in the soil, toxic chemicals in the water, dangerous particulates in the air and a host of other unresolved issues that had lingered for generations.

And that got her thinking some more. New Orleans was like a lot of other places in the United States.

"There are today, as all of you know, places where the burden of society, its pollution and environmental degradation, fall disproportionately on low-income and urban minority populations," she said.

With the winds of change spurred by the election of President Barack Obama, Jackson said she is compelled to act. "We cannot stand by and accept those kinds of disparities any longer," she said. "As the EPA administrator, I see it as part of my potential mission to show all Americans that the Environmental Protection Agency works for them."

In order to do so, her agency, and environmental leaders in general, are going to have to speak to people in a language they understand and one that puts things in terms that are relevant to them. That will include bi-partisan efforts, as well, she said.

"Change is not bad," she added. 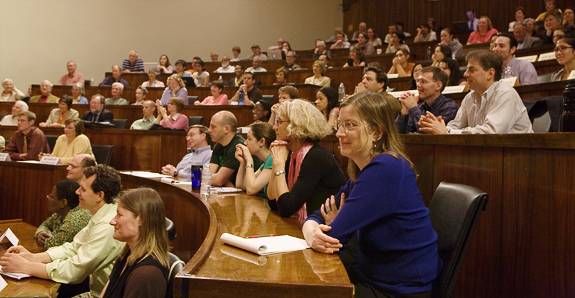 A crowd of students, faculty, staff and community members filled Dodds Auditorium in Robertson Hall for the address.

Jackson, a 1986 alumna of Princeton's Graduate School, spoke at the invitation of the University's Office of the Vice President for Campus Life and the Princeton-Blairstown Center, a University affiliate that provides programs for urban youth.

In introductory remarks, Princeton President Shirley M. Tilghman proudly described Jackson as a "daughter of Princeton" and commended her for her emphasis on science over politics, outlined in testimony before Congress and memos to her 18,000-member staff.

Jackson has spent her career confronting and overcoming environmental challenges threatening the planet's future, Tilghman said. "From Camden to Paterson, she has demonstrated her resolve to hold polluters to account and to make sure that the environmental movement is welcoming to men and women of color and all others who may have felt excluded from its work."

In her remarks, Jackson praised Tilghman's record of advancing and supporting women as well as the cause of science. She also recognized the work of Wardell Robinson-Moore, the executive director of the Princeton-Blairstown Center. They first met when Jackson was earning her master's degree in chemical engineering and Robinson-Moore worked in the administration of the Woodrow Wilson School of Public and International Affairs. They have remained friends ever since.

Jackson was nominated to lead the EPA by Obama on Dec. 15, 2008, and confirmed by the Senate on Jan. 23, 2009. She lists among her priorities reducing greenhouse gas emissions, improving air quality, managing chemical risks, cleaning up hazardous waste sites and protecting America's water.

Following her lecture, Jackson took a dozen questions, mostly from students, about topics ranging from environmental justice litigation to lead paint pollution to the regulation of endocrine disrupting chemicals.

Jackson took a dozen of questions from the audience, mostly from students, discussing several topics including environmental justice litigation, lead paint pollution and the regulation of endocrine disrupting chemicals.

David Christie, a junior majoring in the Wilson School, said he was fascinated by her rhetoric and her choice of aggressive words like "fight" and "challenge." He worried that this may send the wrong signal when cooperation between the business and environmental sectors is sorely needed. "If we don't act to change this there's no chance of making progress," Christie said.

Molly Alarcon, also a junior Wilson School major, was energized by the address and Jackson's endorsement of environmental justice as a key theme. "It's thrilling that something that has been portrayed as being marginal is now at the forefront of national policy," Alarcon said.

Robert Neff, a Bucks County, Pa.,  resident and retiree who often comes to Princeton with his wife, Elaine, to attend lectures, said Jackson's speech had changed his mode of thinking. "I tended to think of environmental issues on the grand scale," Neff said. "This made me focus on environmental justice as affecting local areas based on economic class and status."

In addition to the Office of the Vice President for Campus Life and Princeton-Blairstown Center, sponsors of the event included the Wilson School, Center for African American Studies, Office of Sustainability, Outdoor Action, Pace Center and Princeton Environmental Institute.

Before the lecture (from left), Jackson met with University President Shirley M. Tilghman and Wardell Robinson-Moore, executive director of the Princeton-Blairstown Center and a friend from Jackson's days as a Princeton graduate student.