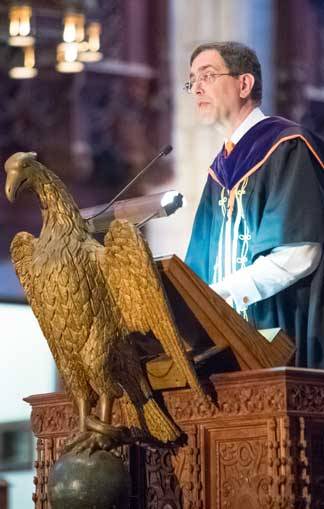 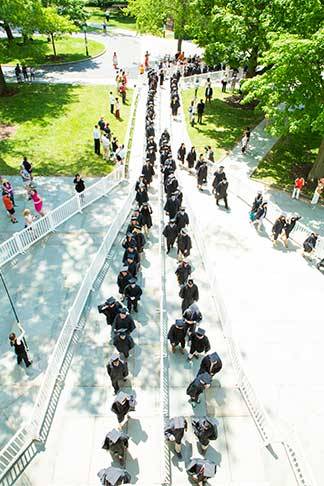 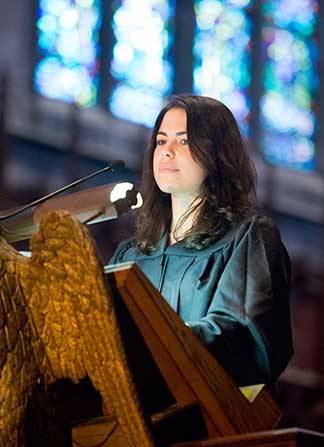 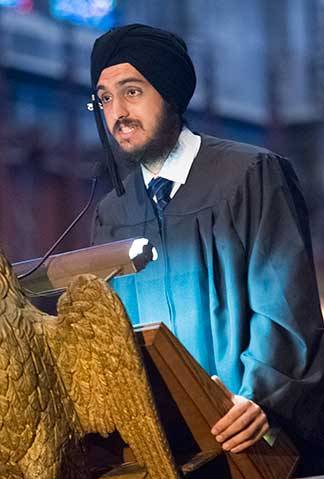 Princeton University began three days of celebrating the Class of 2015 on Sunday, May 31, with its 268th Baccalaureate, a vibrant interfaith service in the University Chapel that offered seniors a chance to look back and to think ahead to life beyond FitzRandolph Gate.

In her Baccalaureate address, Lisa P. Jackson, vice president of environmental initiatives at Apple Inc. and a 1986 graduate alumna, invoked her own experience as a Princeton student to remind seniors that the joys, challenges and lessons of their time on campus will shape them for a lifetime.

More than 3,000 seniors, family and friends gathered for the event, one of the University's oldest traditions, which included music, blessings and readings from a range of faith and philosophical traditions. 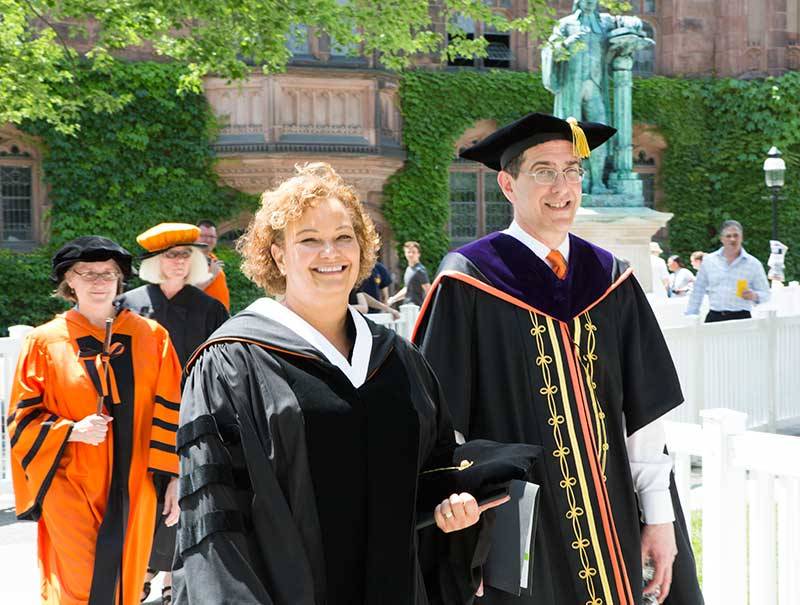 The Baccalaureate address was given by Lisa P. Jackson (left), a 1986 graduate alumna, vice president of environmental initiatives at Apple Inc. and former administrator of the U.S. Environmental Protection Agency. Above, Jackson and Eisgruber prepare to enter the chapel.

Seniors wearing traditional gowns and mortar boards followed banners representing each of the University's six residential colleges in a procession past Cannon Green, where friends and family gathered to watch the ceremony on large screens, and Nassau Hall, where a stone marker installed on the northeast corner last week honors the Class of 2015, continuing a tradition dating to at least 1869.

The seniors continued through East Pyne's arches and courtyard before entering the chapel beneath large colorful kites. The sun filtered through the stained glass windows, and the soaring organ and rich rumble of a timpani filled the air with Aaron Copland's "Fanfare for the Common Man."

The Class of 2015 was welcomed by University President Christopher L. Eisgruber, who, after inviting the seniors to remove their mortar boards in deference to the warm afternoon, set the tone for an event focused on service.

"At the foundation of the Princeton community are the desire and responsibility to serve society and to leave this world a better place than you found it," he said. "As you now enter your next stage of life as a Princetonian, I know that you have left our campus better than when you arrived four years ago, and that you are poised to have the same impact on the world around us. And for that you have my deepest respect and thanks." 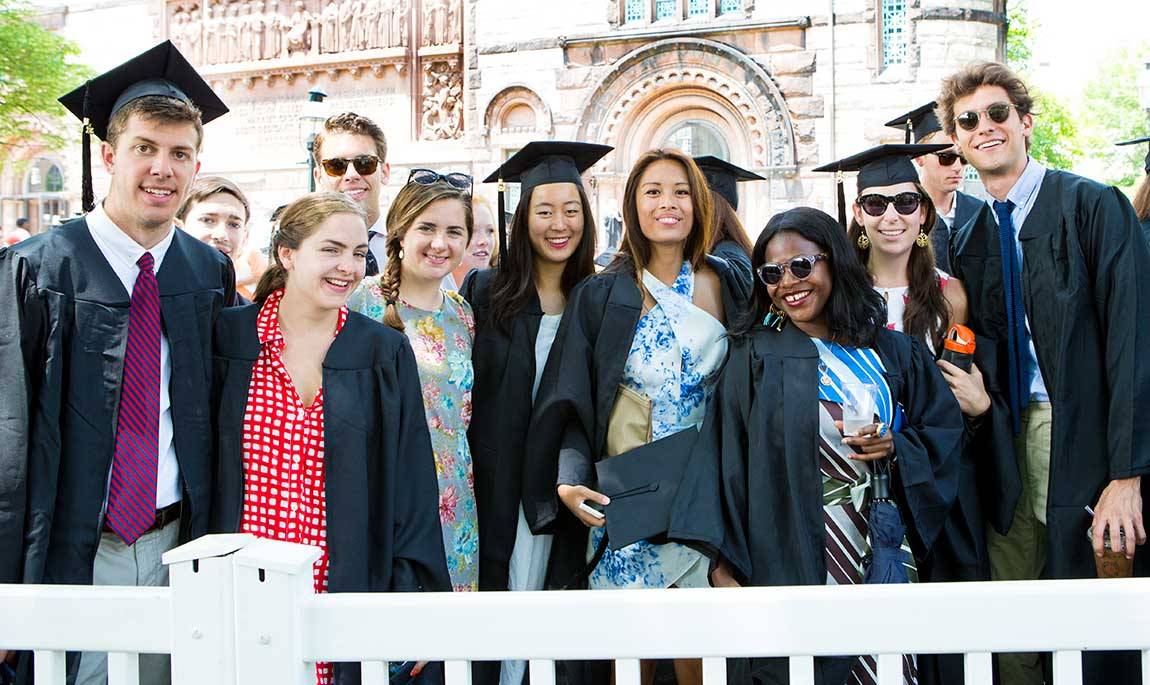 Seniors gather outside Alexander Hall before processing past Cannon Green on their way to the chapel.

Jackson was introduced by Eisgruber, who selected the speaker after consultation with leaders of the senior class. Jackson, a University trustee, served as administrator of the U.S. Environmental Protection Agency from 2009 to 2013. In 2012, she received the James Madison Medal, the University's highest honor for graduate alumni.

"Nearly 30 years ago, our keynote speaker, Lisa Jackson of Princeton's Great Graduate Class of 1986, left Princeton on a quest to utilize her scientific knowledge and fulfill her personal passions in fighting for environmental protection and justice," Eisgruber said. "She has had an extraordinary impact in these pursuits, embodying our University's fundamental commitment to the service of this nation and to all humanity." 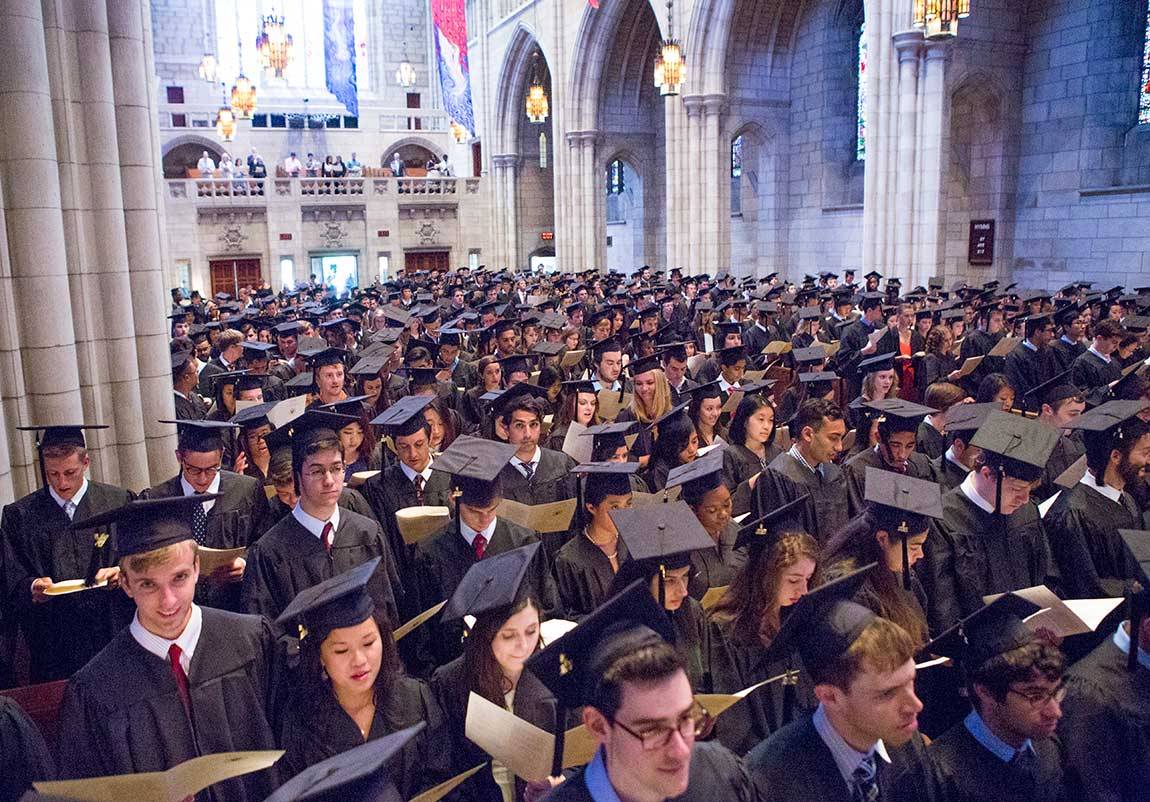 Seniors join in the opening hymn, "Joyful, Joyful, We Adore You."

Returning to the chapel where she once sang as part of the Chapel Choir — which performed during the service — Jackson told seniors they should appreciate that their journey at Princeton hasn't always been smooth, noting recent discussions and protests on campus about justice, equality and rights, many in response to national events.

"I am not saying you should be glad that difficult and regrettable things happened during your time here," Jackson said. "But you should be grateful that they did not go unnoticed, that you weren't insulated from those things, that you had the discussions and debates and confrontations that you had."

And from those events come important lessons, Jackson said.

"Maybe none so important as learning that being part of a diverse community takes work, and it takes practice, and give and take on both sides, and compassion for each other above all," she said.

"I think it can take a while to truly appreciate your Princeton experience — to appreciate what Princeton not only gives us but expects of each one of us," she said. 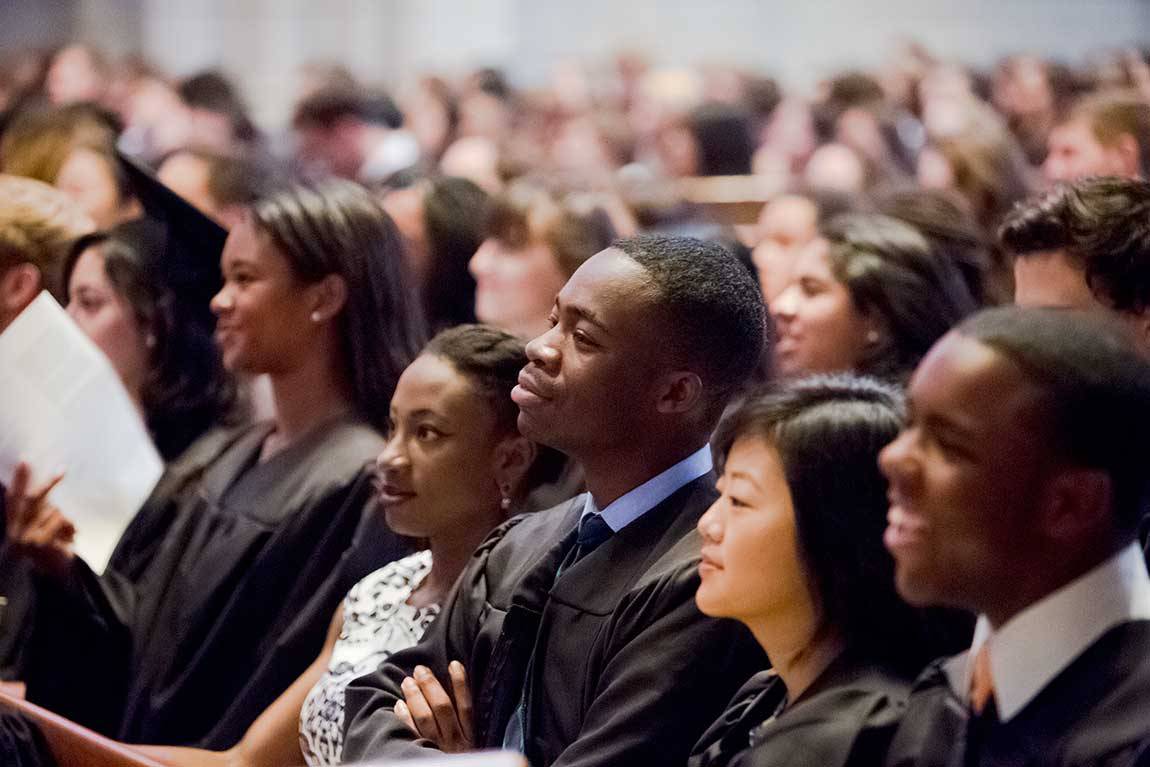 Students listen to Jackson speak. The earliest recorded Baccalaureate address was given in 1760 by University President Samuel Davies.

Looking back at her own life since earning a master's degree in chemical engineering from Princeton, Jackson pointed to lessons from the classroom, such as when she learned about groundwater modeling that was helping the people of Woburn, Massachusetts, fight pollution, and about the little-known risks of chemicals ubiquitous in everyday life.

"Is it any wonder then that toxic waste and toxic waste sites and then toxic chemicals and the regulation of them became two of my priorities years later when I ran the Environmental Protection Agency? I don't think it was any wonder. I think it was Princeton," Jackson said.

She recalled influential experiences off campus.

"Like the time my friend and I got stopped by the police in a parking lot just up Route 206 — yes, we were both black, and actually both are still black [audience laughs] — and the Princeton IDs we carried I'm sure were the difference between us coming back to campus and going to jail that night," she said, also noting the difficulty graduate students of color faced then finding apartments to rent in town.

"It is no wonder to me that issues of environmental justice and pollution in poor communities are a passion of mine to this very day," she said. "So there's no doubt Princeton is a part of who I am today."

In closing, Jackson reminded seniors that just as Princeton will continue to shape their lives, they too have an opportunity to help shape the future of the University. She encouraged students to ask tough questions about the University and its direction.

The Baccalaureate service is available for viewing online. End-of-the-year activities will continue with Class Day and the Hooding ceremony for advanced-degree candidates on Monday, June 1, and Commencement on Tuesday, June 2. 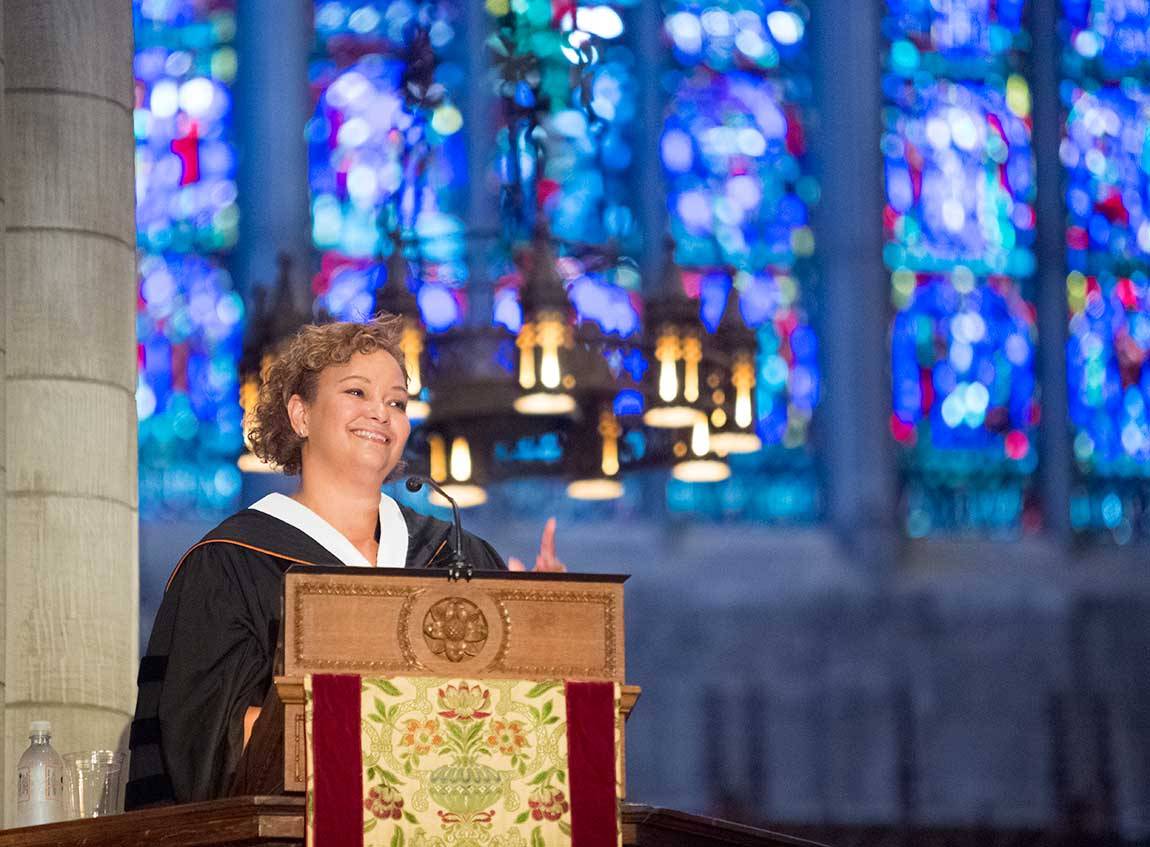 Jackson speaks from the pulpit high above the chapel floor. Her remarks focused on lessons students learned at the University that will shape the rest of their lives.