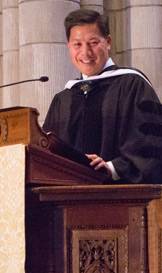 Christopher Lu, deputy secretary of the U.S. Department of Labor and a member of Princeton's Class of 1988, speaks to seniors from the pulpit of the University Chapel during the Baccalaureate service on Sunday, June 1. Lu urged students to embrace public service, regardless of their career path.

Christopher Lu, deputy secretary of the U.S. Department of Labor and a member of Princeton's Class of 1988, speaks to seniors from the pulpit of the University Chapel during the Baccalaureate service on Sunday, June 1. Lu urged students to embrace public service, regardless of their career path. 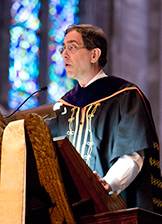 Princeton President Christopher L. Eisbruber said Lu "has followed a distinguished and admirable path in his professional and personal lives."

Princeton President Christopher L. Eisbruber said Lu "has followed a distinguished and admirable path in his professional and personal lives." 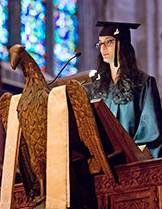 Senior Isabel Kasdin reads from the Bible during the interfaith service. Students who lead the service are chosen for their contribution to religious life at the University.

Senior Isabel Kasdin reads from the Bible during the interfaith service. Students who lead the service are chosen for their contribution to religious life at the University. 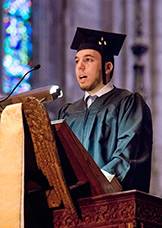 The Class of 2014 began three days of end-of-year celebrations on Sunday, June 1, with Princeton's 267th Baccalaureate, an interfaith service held in the University Chapel that included music, blessings and readings from a range of faith and philosophical traditions.

In the Baccalaureate address, Christopher Lu, deputy secretary of the U.S. Department of Labor and a member of the Class of 1988, urged seniors to embrace public service, regardless of the career path they choose.

More than 3,000 seniors, family and friends gathered for the event, one of the University's oldest traditions. Seniors wearing traditional gowns and mortar boards followed banners representing each of the University's six residential colleges and filed past family and friends on Cannon Green to watch the ceremony on a large screen. The seniors continued through East Pyne's arches and courtyard and into the chapel beneath large colorful kites. The sun filtered through the stained glass windows, and the soaring organ and rich rumble of a timpani filled the air with Aaron Copland's "Fanfare for the Common Man." 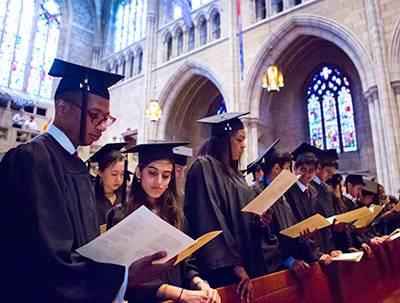 Baccalaureate, one of the University's oldest traditions, is followed by Class Day and Commencement.

Lu was introduced by University President Christopher L. Eisgruber, who selected the speaker after consultation with leaders of the senior class. Lu serves as chief operating officer of the Department of Labor. Previously, he was White House cabinet secretary and assistant to President Barack Obama.

"In the 26 years since today's keynote speaker, Christopher Lu, sat in this chapel at his own Baccalaureate service as a member of the Great Princeton Class of 1988, he has followed a distinguished and admirable path of service in his professional and personal lives," Eisgruber said. "His dedication to his country, his community and — I note with pride — his alma mater exemplify the vision that Woodrow Wilson summoned when he coined this University's informal motto, "Princeton in the Nation's Service.'" 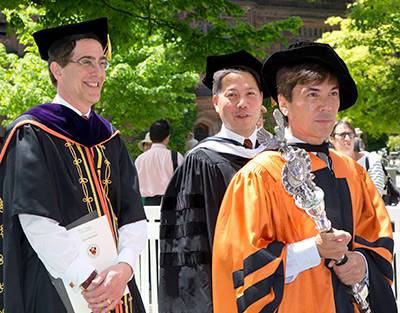 Speaking from the pulpit high above the chapel floor, Lu called on his own story as the child of immigrants who sacrificed for his education to exhort members of the Class of 2014 to make the most of their opportunities in life.

Lu, recalling the words of his father, told the seniors that their Princeton education is an inheritance.

"Unlike a gift, there are strings attached to an inheritance," Lu said. "There are responsibilities implied. An inheritance is something you grow and pass on to the next generation."

Lu challenged the seniors with a question: "How will you make the most of this inheritance of a Princeton education?

"Let me suggest one possible answer: devoting part of your life to public service," he said.

Lu touched on his own career and the public-service accomplishments of others in the federal government — such as those who have helped reduce dangerous infections in hospitals, eradicate polio in India and sent the Curiosity rover to Mars.

"But public service is more than just government service," Lu said. "You can work for a nonprofit organization that promotes affordable housing or helps protect the environment. You can be a high school teacher. You can work as a medical researcher to discover life-saving drugs. You can serve your country in the military, as all three of my freshman year roommates did through ROTC. All of that is also public service." 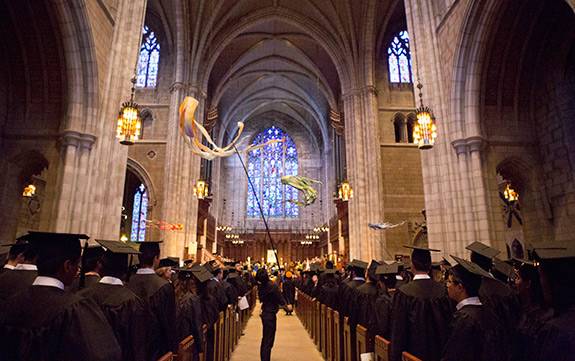 The afternoon sun filters through the chapel's stained glass windows as the seniors file in for the service.

Lu said public service isn't defined by career, citing Bill Gates as a modern example of a successful businessman who has devoted significant time and resources to the public good. "You can work on Wall Street or in Silicon Valley and still be engaged in public service," he said.

"At its core, public service is a mindset," Lu said. "It is a commitment to address the problems of our time — and not simply pass those problems on to the next generation. It is a desire to reach beyond your circle of friends to help people who you've never met."

In closing, Lu told seniors that their public-service efforts will pay off in the long run.

"By looking beyond yourself, by understanding how we are all connected as one people, by fighting for greater opportunity for all, and by continuing the legacy of progress that defines our nation, you choose the better history of this proud University and its graduates," he said. "It is at that moment when you begin to realize the full value of your inheritance."

The Baccalaureate service will be available for later viewing online. End-of-the-year activities will continue with Class Day and the Hooding ceremony for advanced-degree candidates on Monday, June 2, and Commencement on Tuesday, June 3. 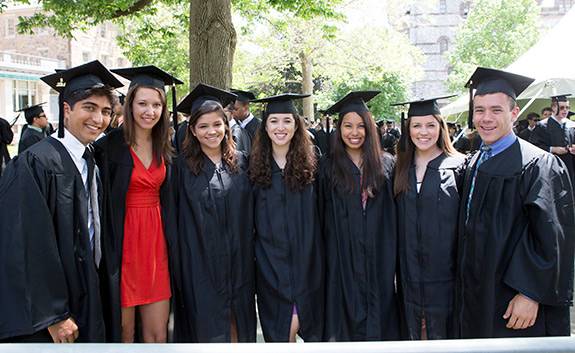 Seniors gather outside Alexander Hall before processing past family and friends on Cannon Green and into the University Chapel. 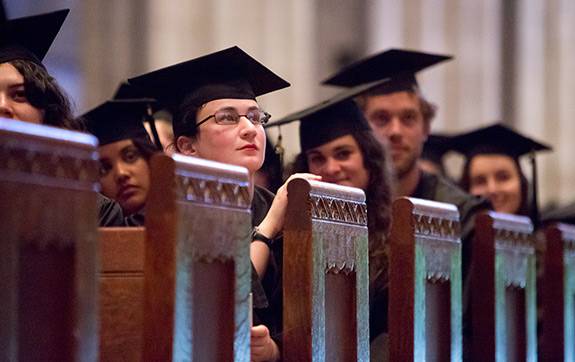 The earliest recorded Baccalaureate address was given in 1760 by University President Samuel Davies. 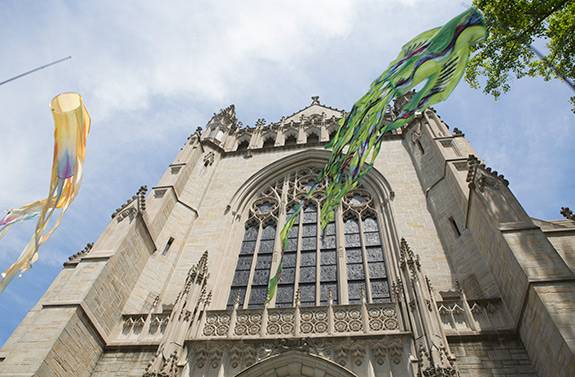 Colorful kites lead the procession into the chapel on a sunny afternoon.