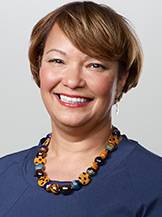 Princeton graduate alumna Lisa P. Jackson, vice president of environmental initiatives at Apple Inc. and former administrator of the U.S. Environmental Protection Agency, has been selected as the speaker for the University's 2015 Baccalaureate ceremony.

Baccalaureate, an end-of-year interfaith service that is one of Princeton's oldest traditions, is scheduled for 2 p.m. Sunday, May 31, 2015, in the University Chapel.

"The Class of 2015 is excited to welcome back Lisa Jackson to Princeton as our Baccalaureate speaker," said Jon Ma, president of the senior class. "Ms. Jackson's dedication to service through the protection of our environment and experience working in government and at Apple makes her an inspirational figure from whom we look forward to hearing and learning."

Jackson earned a master's degree in chemical engineering from Princeton in 1986 and is a trustee of the University.

Jackson joined Apple in 2013 to oversee efforts to minimize its impact on the environment, including removing toxics from its products, incorporating renewable energy and working to increase energy efficiency in the electronics industry. Apple has led the industry in powering all its data centers with 100 percent renewable energy and removing many harmful substances from its products.

From 2009 to 2013, she served as administrator of the U.S. Environmental Protection Agency. Appointed by President Barack Obama, she focused on reducing greenhouse gases, protecting air and water quality, preventing exposure to toxic contamination, and expanding outreach on environmental issues while working for environmental justice.

Previously, she served as chief of staff to New Jersey Gov. Jon Corzine and as commissioner of New Jersey's Department of Environmental Protection.

At Alumni Day in 2012, Jackson was awarded the James Madison Medal, the highest honor the University bestows on an alumnus of the Graduate School.

Princeton's Baccalaureate service focuses on members of the senior class. It includes prayers and readings from various religions and philosophical traditions. The earliest recorded Baccalaureate address — titled "Religion and the Public Spirit" — was delivered by University President Samuel Davies in 1760 to the 11 members of the graduating class.