by Mike Caddell, Office of Communications 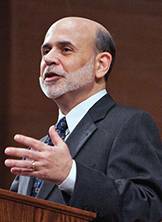 Ben Bernanke, chairman of the Board of Governors of the U.S. Federal Reserve and former chair of the economics department at Princeton University, has been selected as the speaker for the University's 2013 Baccalaureate ceremony.

Baccalaureate, an end-of-year interfaith service that is one of Princeton's oldest traditions, is scheduled for 2 p.m. Sunday, June 2, in the University Chapel.

Princeton President Shirley M. Tilghman selects the Baccalaureate speaker after consultation with senior class leaders. Officers of the Class of 2013 recommended Bernanke based on his strong ties to Princeton and his expertise and insights into economic changes that have had a profound global impact in recent years.

"We are honored and excited to welcome Federal Reserve Chairman Ben Bernanke back to campus as our Baccalaureate speaker. Through his career in public service and academia, Chairman Bernanke personifies Princeton's motto: 'In the nation's service and in the service of all nations,'" said Zach Beecher, president of the senior class. "We look forward to hearing the thoughts, advice and wisdom of Chairman Bernanke as we begin our journey through Fitz-Randolph Gate and beyond."

Bernanke is currently serving his second term as Chairman of the Board of Governors of the Federal Reserve System, helping shape and guide economic and monetary policy. Prior to his appointment, Bernanke was the Chairman of the President's Council of Economic Advisers.

Bernanke served as a member of the Princeton faculty in various roles from 1985 until 2005, including as the Class of 1926 Professor of Economics and Public Affairs, the Howard Harrison and Gabrielle Snyder Beck Professor of Economics and Public Affairs, director of the University’s Bendheim Center for Finance and the chair of the economics department.

Named Time magazine’s Person of the Year in 2009 for his role in preventing a complete economic collapse, Bernanke is the author of numerous articles and books spanning multiple economic topics, and he has also taught at Stanford University, Massachusetts Institute of Technology and New York University.