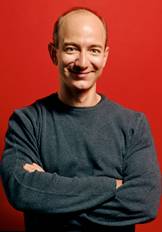 Watch a video in which Jeff Bezos offers new students advice and discusses his philosophy on innovation.

Princeton alumnus Jeff Bezos, the founder and chief executive officer of Amazon.com, has been selected as the speaker for this year's Baccalaureate ceremony. The interfaith worship service that is one of Princeton's oldest traditions is scheduled for 2 p.m. Sunday, May 30, in the University Chapel.

Bezos graduated with highest honors and Phi Beta Kappa in electrical engineering and computer science from Princeton in 1986. He founded Amazon.com, now the leading online retailer, in 1994.

President Shirley M. Tilghman selects the Baccalaureate speaker after consultation with senior class leaders. Class officers recommended Bezos because of his pioneering work in commerce and the Internet.

"During our time together at Princeton, we've witnessed so much change in American business, technology and politics," said Aditya Panda, president of the senior class. "So as we prepare to take our first steps into the uncertainty outside FitzRandolph Gate, it's hard to imagine a guide better than an entrepreneur best known for his own 'first steps.'"

Bezos always has been interested in anything that can be revolutionized by computers. Intrigued by the amazing growth in use of the Internet, he created a business model that leveraged the Internet's unique ability to deliver huge amounts of information rapidly and efficiently.

Princeton's Baccalaureate service is an end-of-the-year ceremony focused on members of the senior class. It includes prayers and readings from various religious and philosophical traditions. The earliest recorded Baccalaureate address -- titled "Religion and the Public Spirit" -- was delivered by President Samuel Davies in 1760 to the 11 members of the graduating class. Since 1972, the address has been given by a speaker chosen by the president after discussion with class leaders.

Seating in the chapel is limited to members of the senior class and faculty procession. Seniors receive two tickets for family and guests who may view the ceremony via simulcast.