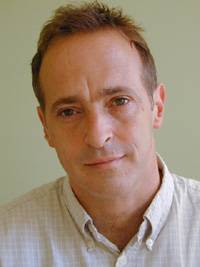 Humorist and bestselling author David Sedaris has been chosen as the speaker for this year's Baccalaureate, the interfaith worship service that is one of Princeton's oldest traditions. The ceremony is scheduled for 2 p.m. Sunday, June 4.

Sedaris is the author of the bestsellers "Barrel Fever" and "Holidays on Ice," as well as collections of personal essays, "Naked" and "Me Talk Pretty One Day," both of which became immediate bestsellers. He made his comic debut recounting his experiences on the job as a Macy's elf, reading his "SantaLand Diaries" on National Public Radio's Morning Edition. He has appeared many times at McCarter Theatre in Princeton.

President Shirley M. Tilghman selects the Baccalaureate speaker after consultation with senior class leaders. In an e-mail to the class of 2006, class officers said they recommended Sedaris "because there are very few people [who] have seen a wide range of human experiences and had the talent to write about them so charmingly and humorously."

"This ability is highlighted by the fact that he is one of the few authors that Princeton students will pick up and read in spite of all of the other work they may have," they wrote. "The class of 2006 will surely be inspired by Mr. Sedaris' perseverance and resulting triumph as we gather together to celebrate our time at Princeton and we prepare to step forth into the world that Mr. Sedaris has come to know so intimately in his failures and his successes."

Sedaris' essays appear regularly in Esquire and The New Yorker, and his original radio pieces air on "This American Life," distributed nationally by Public Radio International.

In 2001, Sedaris won the Thurber Prize for American Humor and was named by Time magazine as "Humorist of the Year." His book "Dress Your Family in Corduroy and Denim" was published in June 2004, and "Children Playing Before a Statue of Hercules: An Anthology of Outstanding Stories," edited by Sedaris, was published in April 2005. Also in 2005, Sedaris was nominated for two Grammy Awards for Best Spoken Word Album ("Dress Your Family in Corduroy and Denim") and Best Comedy Album ("David Sedaris: Live at Carnegie Hall").

Baccalaureate is an end-of-the-year ceremony focused on members of the senior class. Held in the University Chapel, it includes prayers and readings from various religious and philosophical traditions. The earliest recorded Baccalaureate address -- titled "Religion and the Public Spirit" -- was delivered by President Samuel Davies in 1760 to the 11 members of the graduating class. Since 1972, the address has been given by a speaker chosen by the president after discussion with class leaders.