In his Baccalaureate address, humorist David Sedaris conjured a fictional era of Princeton history when he was a student at the University. Below left: Families posed for photos following the service. 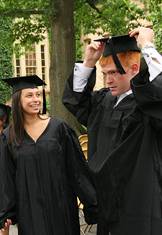 Seniors donned caps and gowns before processing into the University Chapel. 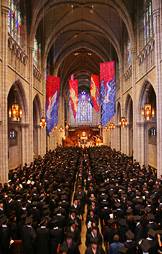 The chapel was filled for the service, which included prayers and readings reflecting the diversity of religious life at Princeton.

Humorist David Sedaris delighted members of the class of 2006 at Princeton University's Baccalaureate service on Sunday, June 4, with a fanciful tale describing what Princeton was like when he was a student.

"When I went to Princeton, things were completely different," Sedaris deadpanned. "I'm dating myself, but this was before Jesus Christ."

"Back then we were on a pass-fail system," he continued. "If you passed, you got to live. And if you failed, you were burned alive on a pyre that is now the transgender studies building." The system "kept you on your toes," he insisted. "If I'd been burned alive because of bad grades, my parents would have killed me."

Baccalaureate, an interfaith worship service, dates to 1760 and is one of Princeton's oldest traditions. Held in the University chapel, it includes prayers and readings reflecting the diversity of religious life at Princeton. A "sermon" or address is given by a speaker chosen by the president after discussion with class leaders.

Sedaris, who actually graduated from the School of the Art Institute of Chicago, is an author who has used self-deprecating humor and sharp wit to write about his foibles and those of his family to hilarious effect.

"If laughter is the best medicine for what ails us, then David Sedaris is a physician extraordinaire," said President Shirley M. Tilghman in her introduction of the speaker. Sedaris is the author of the best-sellers "Barrel Fever" and "Holidays on Ice," as well as collections of personal essays "Naked" and "Me Talk Pretty One Day." He won the Thurber Prize for American Humor in 2001.

In his speech, Sedaris conjured a fictional era of Princeton history in which students attended modesty seminars, majored in patricide and took classes from a fortune teller.

He recounted his parents' ecstatic reaction to the news that he would be attending Princeton. His father outfitted himself in "a Princeton breastplate and a Princeton night cap" and wore a sandwich board that said, "Ask me where my son went to college." He also drove a wagon with a bumper sticker that read, "I hold my horses for Ivy League schools," Sedaris told the audience.

But when Sedaris informed his parents that he was thinking of majoring in comparative literature, they were not pleased. "Dad followed his 'I'm so disappointed' speech with a lecture on career opportunities. 'You're going to study literature and get a job doing what?' he said. 'Literature-izing?'"

After Sedaris graduated, he said, "I went back home -- an Ivy League graduate with four years of dirty laundry and his whole life ahead of him. 'What are you going to do now?' my parents asked. And I said, 'Well, I was thinking of washing some of these underpants.' That took six months."

Eventually the wayward graduate ended up publishing a book of stories about his family, proving, said Sedaris, that we never know what the future will hold. "Stuff comes up, weird doors open, people fall into things," he told the seniors.