John Fleming, the Louis W. Fairchild '24 Professor of English and Comparative Literature Emeritus, delivered the address at Baccalaureate, the kickoff event of Princeton's Commencement activities. In a speech that was both wry and wistful, Fleming stressed that the soon-to-be graduates must use their Princeton education to serve the global community.

Top left: Seniors filled the University Chapel for the Baccalaureate service, an interfaith worship service that is one of Princeton's oldest traditions.

At left: Members of the class of 2007 enjoyed Fleming's address, in which he dubbed them the "Class of Destiny." 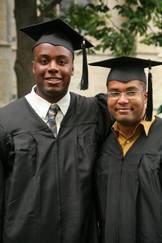 Seniors shared one of their last days as Princeton students as they prepared for the Baccalaureate service. Bottom left: Students gathered with family and friends while awaiting the processional into the chapel.

Baccalaureate speaker John Fleming urged members of the class of 2007 -- or the "Class of Destiny," as the beloved English professor dubbed them -- to recognize the privilege of a Princeton education and to use it to improve the world.

The Baccalaureate service, held Sunday, June 3, in the University Chapel, is one of Princeton's oldest traditions, dating to 1760. It is an interfaith worship service that includes prayers and readings reflecting the diversity of religious life at Princeton. A "sermon" or address is given by a speaker chosen by the president after discussion with class leaders. 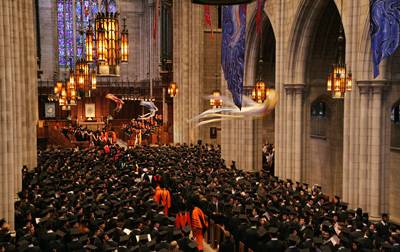 In his address, Fleming displayed the wry wit and wisdom -- and fondness for students -- that marked his 40-plus years as a popular teacher and well-known figure in many University activities. Greeting the seniors with "paternal affection," he began by bestowing upon them a lofty title. "One day chiseled into the stone wall of this holy place will be an inscription that reads: 'They entered this sacred fane on Baccalaureate Sunday as the Great Class of 2007. They marched out the Princeton Class of Destiny!'" he said.

Fleming recalled welcoming the seniors as freshmen when he spoke at an "Integrity Assembly" in fall 2003, serving as "the warm-up act" for keynote speaker Bill Bradley, the former U.S. senator and Princeton alumnus.

"I remember the event but dimly, and the fact that you have invited me here today suggests that you remember it not at all," he said. "Still I regard it as a great success. I told you to be good, and lo, you have been good, very good. Can it work a second time?" 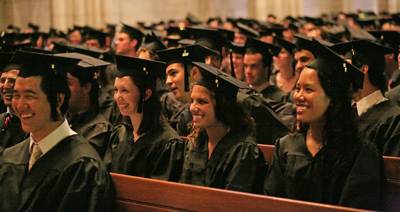 Fleming, the Louis W. Fairchild '24 Professor of English and Comparative Literature Emeritus, earned a Ph.D. from Princeton in 1963 and joined the faculty two years later. He retired last spring.

"In retirement the sense of vital connection with the daily life of the institution erodes rapidly. I shall spend the whole of the next academic year away, and when I return that sense will be wholly erased. Hence, 2007, you are the last Princeton class I ever will really know," he said. "Some of you were my freshman or sophomore academic advisees. Some of you took a freshman seminar on Dante with me. Quite a few of you took upper division courses with me. Hence I am swimming in that same bittersweet sea of emotionality in which you are bobbing about during this long weekend."

Looking ahead to their exit from Princeton, Fleming reminded the seniors that "a Princeton degree comes in a package of privilege. As compared with most Americans you will make more money, enjoy better health, live in better housing, have better prospects for your children, go to the Caribbean more often and to the state penitentiary less often," he said.

But he emphasized a serious message that the privilege comes with responsibility to the world. "This involves the ancient maxim 'Noblesse oblige,'" he said. "That meant, roughly, that social privilege demanded social obligation. The English version is that from those to whom much has been given, much will be expected."

As an example of the issues facing the students' generation, Fleming cited the United Nations Millennium Development Goals, which address problems related to global poverty. In particular, he noted that world leaders have set a goal that by 2015 every child in the world will have the opportunity to "complete a full course of primary education."

"I fear there is not a ghost of a chance of fulfilling this second goal by 2015. The problem is not money. The estimate is that it would cost about $10 billion a year. That is chump change. That is half of what Americans spend each year on ice cream," he said.

"No, the problem is that my generation, though appalled by these statistics, is too tired, or too timid, or too distracted to come up with the requisite imagination and will," Fleming said. "We don't want to live in a world where a hundred million kids have no chance to go to school, but we are leaving it up to you to do something about it."

Looking back on the seniors' time at Princeton, as well as his own, Fleming thanked the many student athletes, actors, musicians, writers and others whose extracurricular activities he enjoyed. And he noted that he looked forward to meeting with them again, as he has so many other Princeton alumni in his travels around the world. 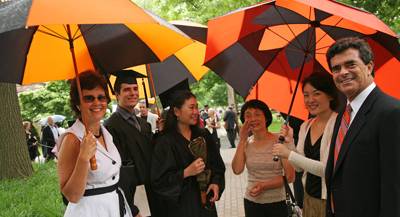