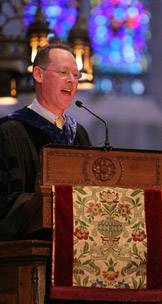 In his Baccalaureate address June 1, Paul Farmer, the founding director of the international charity Partners in Health, asked the Princeton graduating class of 2008 to do nothing less than change the world, urging them to ignite a broad social movement that would bring peace, health and justice to humanity. 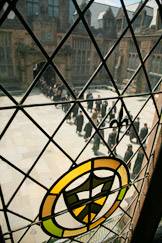 Members of the class of 2008, framed by this stained glass window bearing the University shield, processed through the courtyard at East Pyne. Photos: John Jameson

Medical anthropologist and physician Paul Farmer June 1 asked the Princeton graduating class of 2008 to do nothing less than change the world, urging them to ignite a broad social movement that would bring peace, health and justice to humanity.

"It is your generation's job to make 'history and hope rhyme,'" said Farmer, giving the address at the 261st Baccalaureate, the interfaith service that is one of Princeton's oldest traditions. He borrowed the phrase from a poem by Nobel Prize-winning poet Seamus Heaney, a portion of which he recited. The poem, titled, "The Cure at Troy," is Heaney's translation of "The Philoctetes" by Sophocles. In it, the transforming power of justice is depicted as a tidal wave.

The ceremonial occasion was accented by people twirling colorful kites on poles, organ, timpani and choral performances, as well as the customary parade of regalia-laden academic leaders and graduating seniors. The event was held in the University Chapel. 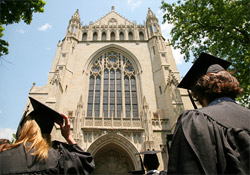 Seniors approached the University Chapel for the Baccalaureate service, an interfaith worship service that is one of Princeton's oldest traditions.

Farmer, the founding director of the international charity Partners in Health, cited the bright futures he viewed as being in store for Princeton graduates, professions that will include being "scholars, scientists, physicians, lawyers and titans of business … and leaders of politics."

But, he added, "Regardless of what you do during the next 20 years, you can be part of the movement to make life on this planet safer, more sustainable and more just."

Farmer was awarded an honorary degree from Princeton in 2006 for his globe-spanning work treating victims of infectious diseases in rural Haiti, war-torn Rwanda and inner city Boston. President Shirley M. Tilghman, who selected him as speaker after consultation with senior class leaders, described him as one of her heroes before the assembled faculty, graduates and families. Farmer, a Harvard graduate and the Presley Professor of Medical Anthropology at Harvard Medical School, told the audience that he had borrowed Tilghman's academic hood to signal to all that he possessed an "orange heart." 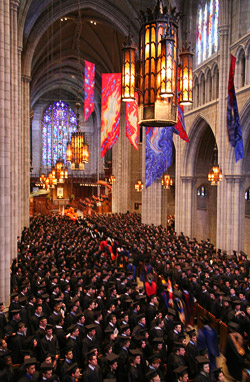 Seniors filled the chapel for the Baccalaureate service. The earliest recorded Baccalaureate address -- titled "Religion and the Public Spirit" -- was delivered by President Samuel Davies in 1760 to the 11 members of the graduating class.

Renowned for his work with AIDS patients in some of the world's poorest countries, Farmer painted a utopian vision for the graduates that he said could be made real by their future good works. Quality health care could be available to all, he said, and peace could come to centers of violence such as Haiti, Sudan and the Congo. The death penalty in the United States, he said, could be abolished and the use of torture worldwide could disappear. New Orleans, he said, could become a thriving metropolis while the now ultra-rare, ivory-billed woodpecker could be a common sight once again. What's more, nuclear proliferation could be stopped, in Farmer's vision, with war itself forever banned.

The penalty for inaction, he said, is harsh. Present trends, he said, could create "a violent world of haves and have-nots." He warned the students to prevent a situation where they may have to "wall yourself off from the hungry and the sick, who are, along with students, my constituency. So that you don't have to hear terms like 'pre-emptive war' or 'collateral damage' or 'terrorism' when you turn on a television." He added ominously, "That's where we're heading, and we need to change course."

There will be prime opportunities in the years ahead for action, he said.

"The inhabitants of our wounded but still wonderful world need you, class of 2008," Farmer said. "Make this longed-for tidal wave wash away some of the world's problems, wash clean the wounds, and nourish the planet so that all of its inhabitants have a shot at the sort of marvelous lives that await you." 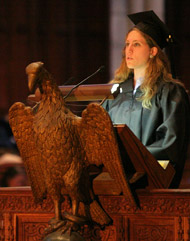 Suzanne Levy was one of several seniors who read during the service, which included prayers and readings from various religious and philosophical traditions.

Students were struck by Farmer's words. "I think every student here can pick one hope from the speech and [turn it into] history," said senior Kalina King. Added Thomas Haine, president of the class of 2008, "Long-term visions are always inspiring."

Farmer's speech also had its light moments, with pop culture references, including what he sees as the University's resemblance to the fictional Hogwarts school of the "Harry Potter" book series. He drew laughs from students when he mentioned the series of movies involving the young adult duo, Harold and Kumar, whose epic cinematic journeys have involved escapes from Guantanamo Bay and stops at Princeton and a White Castle restaurant somewhere in New Jersey. 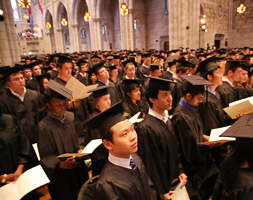 Seniors shared one of their last days as Princeton students as they participated in the Baccalaureate service.

He conceded that it was the Republican presidential candidate, John McCain, who inspired his utopian vision. Holed up in a hotel room watching CNN, he saw McCain describe his view of the future during a campaign stop. It was, Farmer said, "surely the only idea I've ever copped from him." In Farmer's optimistic futureworld, Princeton would forever place first in newsmagazine rankings. In addition, he said, drawing applause, each student will have his or her own personal faculty. And Tilghman, he said, will become the first Ivy League president to complete the Boston Marathon in less than three hours.

Humor aside, Farmer said he wanted students to follow their dreams. But he also prompted them to forge a "common dream." "Make it match your own, which are likely to be realized in any case," Farmer concluded. "And make sure your dreams include healing a wounded world." 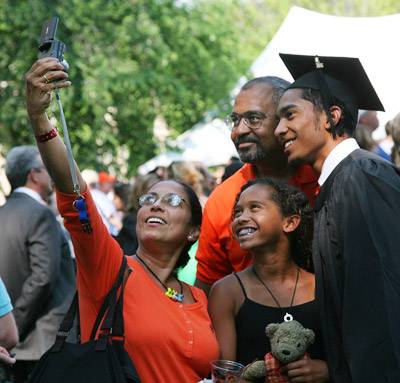 Senior Gabriel Ivey and his family captured the occasion in pictures following the ceremony.

The Baccalaureate service was webcast live and will be available for later viewing. End-of-the-year activities will continue with Class Day on Monday, June 2, and Commencement on Tuesday, June 3.