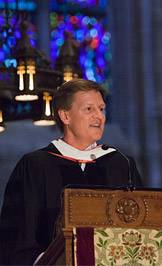 Best-selling author and Princeton alumnus Michael Lewis speaks to graduating seniors at Princeton University's 265th Baccalaureate ceremony in the University Chapel. Lewis urged seniors to put the opportunities afforded them by a Princeton education to good use. 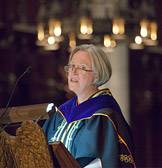 Princeton President Shirley M. Tilghman welcomes the graduating seniors and asks them to thank the people who helped them through their time at Princeton, including classmates, faculty and family members. "Whether they have joined you for these festivities or are cheering you from afar, their dreams are intertwined with yours," she said.

Princeton alumnus Michael Lewis offered the University's Class of 2012 the story of his path from art-history major to investment banker to best-selling author as an illustration of how good fortune plays an important role in success — and leaves its recipients with a responsibility to society. 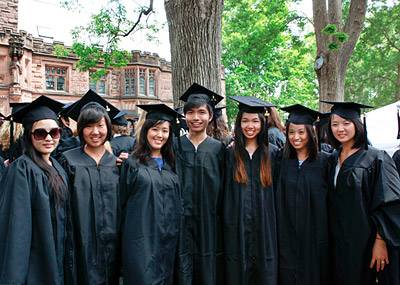 Graduating seniors gather near East Pyne before joining the Baccalaureate procession to the University Chapel.

Lewis said the success of his first book, "Liar's Poker: Rising Through the Wreckage on Wall Street," left some calling him a born writer.

"This was absurd. Even I could see there was another, truer narrative, with luck as its theme," said Lewis, who had landed a job at the investment bank Salomon Brothers after the wife of a bank official introduced him to her husband. Lewis became the bank's expert on derivatives, he said, just as such financial instruments were helping to remake Wall Street. Insights gleaned from that job formed the underpinning of "Liar's Poker" and led him to change his career and become a writer.

The procession of graduating seniors begins to make its way through family and friends gathered outside the University Chapel before the service. About 3,500 seniors, family members and friends attended the event.

"What were the odds of being seated at that dinner next to that Salomon Brothers lady? Of landing inside the best Wall Street firm to write the story of an age? Of landing in the seat with the best view of the business?" Lewis asked. "Of having parents who didn't disinherit me [for becoming a writer] but instead sighed and said 'do it if you must'? Of having had the sense of must kindled inside me by a professor of art history at Princeton? Of having been let into Princeton in the first place?"

Lewis said another of his books, "Moneyball: The Art of Winning an Unfair Game," which describes how the cash-strapped Oakland Athletics managed to match the performance of better-funded opponents on the baseball diamond, offers a message on the role of good fortune.

"Don't be deceived by life's outcomes," Lewis said to the seniors. "Life's outcomes, while not entirely random, have a huge amount of luck baked into them. Above all recognize that if you have had success, you have also had luck — and with luck comes obligation. You owe a debt, and not just to your gods. You owe a debt to the unlucky." 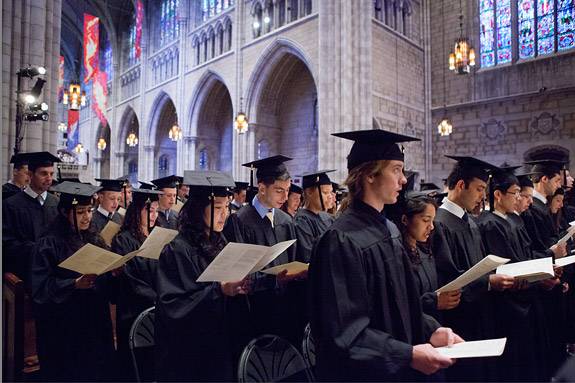 Baccalaureate is an interfaith service reflecting the diversity of religious life at Princeton.

In her introduction, Princeton President Shirley M. Tilghman highlighted Lewis' ability to grant "his readers access to unfamiliar worlds, while revealing strengths and failings that are common to us all."

"His books and films have been read and seen by millions, partly because he picks his subjects well but chiefly because he achieves that rare combination of both enlightening and entertaining his readers; he uplifts and deconstructs," Tilghman said. 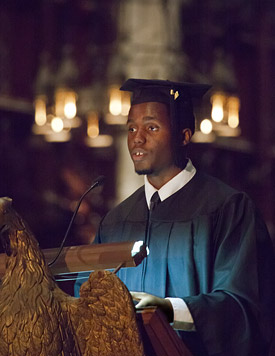 Senior Jonathan Ford Jr. reads from the Bible during the service, which included prayers and readings from several religious and philosophical traditions.

Lewis joked that having studied art history, he graduated sure of only one thing: "I was of no possible economic value to the outside world." But with the guidance of Professor William Childs, now professor of art and archaeology emeritus, Lewis said he became obsessed with his senior thesis topic ["Donatello and the Antique"] and came away knowing what he wanted to do with his life: to write.

Before he fully took to that path, he earned a master's degree from the London School of Economics and worked at Salomon Brothers. Lewis said his father urged him to reconsider his decision to leave his lucrative position there to write his first book, but Lewis wanted to return to the sense of possibility he'd felt at Princeton while writing his thesis.

"I didn't need to think about it," Lewis said. "I knew what intellectual passion felt like — because I'd felt it here, at Princeton — and I wanted to feel it again. I was 26 years old. Had I waited until I was 36, I would never have done it. I would have forgotten the feeling, and it would have felt too risky." 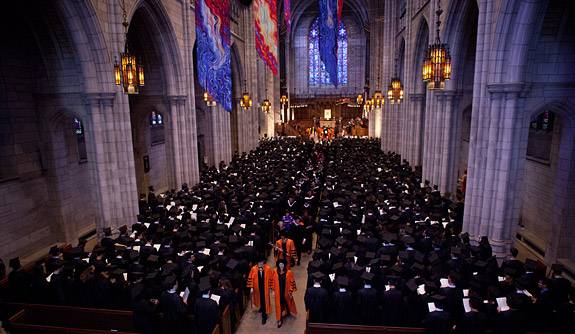 At the end of the service, seniors wait to join the recession to leave the chapel and rejoin family and friends.

At Sunday's service, which drew roughly 3,500 seniors, family members and friends, the Class of 2012 filed into the chapel under large colorful kites waved on long poles and followed banners representing each of the University's six residential colleges.

Family and friends viewed the service via simulcast outside the chapel and in buildings across the campus. Early in the service, a sudden storm caused those seated outside to scramble for cover under archways and in nearby buildings. Some joined the simulcast sites while others streamed a webcast on their smartphones. After the service, the sun shone brightly on the recession. 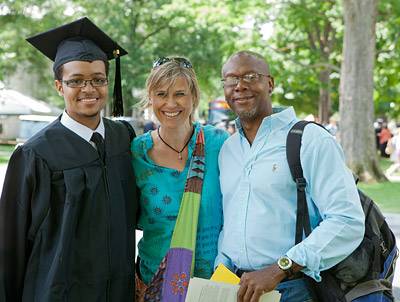 Kristan Scott (left), Class of 2012, poses for a photo with his father and stepmother outside the University Chapel.

Lewis closed his address with an anecdote about an experiment conducted by psychologists at the University of California-Berkeley, who arbitrarily chose one student in a group of three to serve as leader in discussing how to solve a complicated moral problem. Thirty minutes into the discussion, the researchers offered each group a plate of four cookies. After each participant ate a cookie, the person who had been appointed the leader of the group consistently grabbed the fourth cookie.

"So never forget: In the nation's service. In the service of all nations," he said, citing the University's informal motto.

The Baccalaureate service will be available for later viewing online. End-of-the-year activities will continue with Class Day on Monday, June 4, and Commencement on Tuesday, June 5. 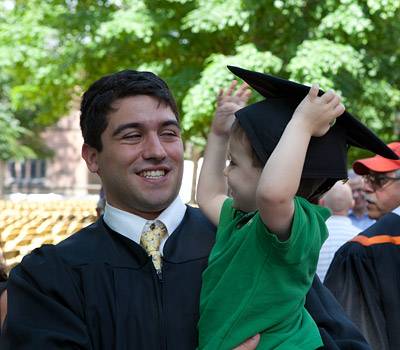 Erick Kazarian, Class of 2012, lets his cousin Greg Deirmergiun try out his mortar board after the Baccalaureate service.