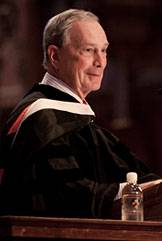 Princeton President Shirley M. Tilghman welcomes the class of 2011 to Baccalaureate. "You have kept the spirit of Princeton burning brightly," she told the seniors. "May it always light your way."

New York City Mayor Michael Bloomberg urged Princeton University's graduating seniors May 29 to expand upon the accomplishments of their generation while serving those who need help most and while promoting freedom.

"Always find time to give back to others," Bloomberg told the seniors assembled for Princeton's Baccalaureate ceremony. "It is the glue that binds us together as Americans -- and the fact that your generation is more active in service than any before it is an incredibly hopeful and encouraging sign for the future." 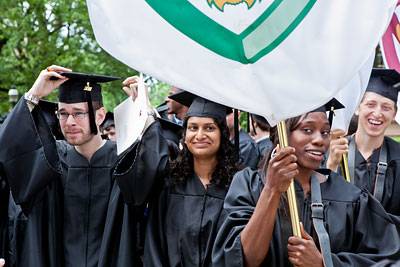 Students from the graduating class of 2011 proceed into the University Chapel for the Baccalaureate ceremony.

Bloomberg spoke from high in the University Chapel pulpit during the 264th Baccalaureate ceremony, an interfaith worship service that is one of the University's oldest traditions.

The mayor began by joking how he was happy to be at Baccalaureate as a speaker rather than as a parent.

"I've been there," he said to the roughly 2,000 family members, friends and others watching outside the chapel on a large video screen. "When my daughter, Emma, graduated, I was dying to know what the inside of this chapel looked like." 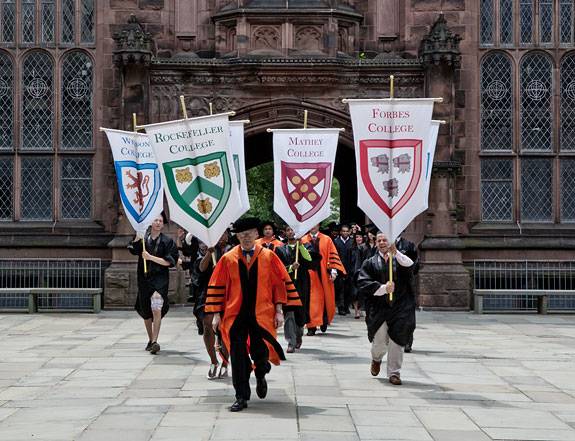 Led by students holding the banners of Princeton's six residential colleges, the class of 2011 walks through the courtyard of East Pyne toward the University Chapel for Baccalaureate.

Turning his attention to the seniors, Bloomberg noted that technological advances fueled by today's youth have helped spread freedom around the world, and he challenged the Princeton seniors to add to their generation's legacy.

"Your generation is tearing down walls here at home -- and, if you think about it, across the world," he said, referring to the recent democratic movements in the Arab world that "were lit, in part, by technology that was developed by your generation.

"No other generation has started revolutions from halfway around the world. Yours has. And you're only just beginning," he said. 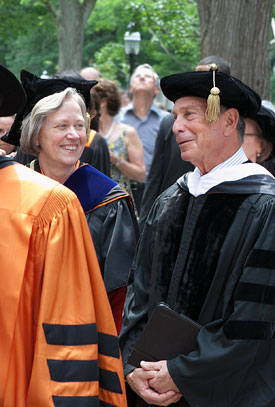 Bloomberg also found special meaning in the ceremony being held during Memorial Day weekend. "There may be no greater way to repay those American soldiers who died for our country than to spread the freedoms Americans enjoy around the world. So when you leave here, keep it up," he said.

"As we stand up for the freedoms our soldiers have died protecting, we also owe it to them to do what's best for our nation -- not what's easiest or more popular," he added.

Bloomberg, a philanthropist who moved into public service after a successful career in business, emphasized the rewarding feeling of serving others. Citing Princeton alumni who have started service initiatives in the United States and abroad, he encouraged seniors to make helping the less fortunate an integral part of their lives after graduation.

"It's something that all of you are familiar with. It's part of Princeton's informal motto: 'In the nation's service and in the service of all nations,'" he said. "And I have no doubt that your class will produce its own social entrepreneurs who will strive to change the world."

In her introduction of the mayor, President Shirley M. Tilghman lauded the legacy he has left with his financial information services and media company, Bloomberg LP, and with his charitable organization, Bloomberg Philanthropies, which contributed more than $279 million to 970 charities in 2010.

Tilghman also noted that, while Bloomberg is loyal to his alma mater, Johns Hopkins University, his family will always be connected to Princeton through Bloomberg Hall, which is named after his daughter, Emma, of the class of 2001.

Tilghman said Bloomberg "has displayed principled independence, taking positions that he believes are in the best interests" of New York and the nation, rather than taking the politically expedient path. 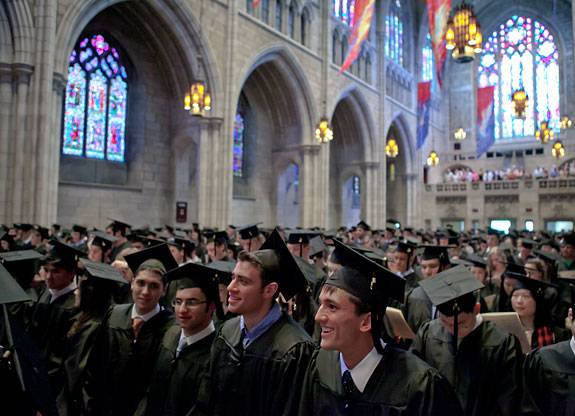 Members of the class of 2011 enjoy the Baccalaureate proceedings inside the University Chapel.

In stressing to the seniors that all Americans must fight to defend freedom, Bloomberg spoke of his support for Chinese artist Ai Weiwei, who has been detained by Chinese authorities; for the rights of Muslims to build a mosque in a community center in lower Manhattan; and for a bill granting marriage equality to all men and women.

He urged students not to "follow the crowd" in deciding what path to follow, telling them that the education they have received at Princeton will allow them to cut through the noise of today's political rhetoric.

"You have all been fortunate to be a part of an institution that's always put an emphasis on practical thinking, real-world solutions and sticking to the facts," he said. 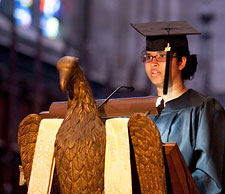 Senior Jahnabi Barooah delivers a reading from a Hindu scripture during Baccalaureate, an interfaith worship service.

As he closed his remarks, Bloomberg provided the seniors with some perspective as they leave Princeton.

"You're going to have to face some very challenging times. The old paradigm is changing," he said. "But your talent, your energy and your vigorous commitment to the truth is what will carry you through all of it. So congratulations. Be very proud of what you've accomplished, and look with optimism to what you really can do to change this world."

After the ceremony, students and faculty approached Bloomberg and thanked him for his remarks and for the positions he has taken on various issues.

The Baccalaureate service was webcast live and will be available for later viewing. End-of-the-year activities will continue with Class Day on Monday, May 30, and Commencement on Tuesday, May 31. 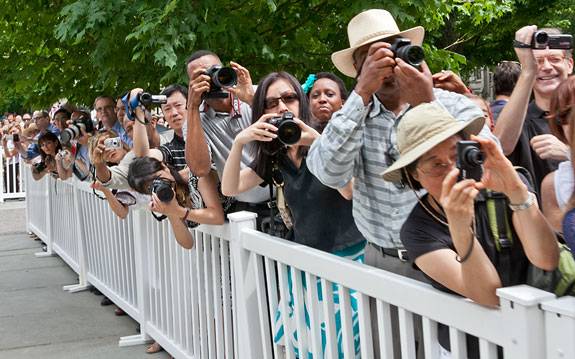 Some of the 2,000 friends, family members and others gathered outside the chapel wait for the perfect photo of the graduating seniors.