In his Baccalaureate address May 31, U.S. Army Gen. David Petraeus, a Princeton alumnus and commander of the U.S. Central Command, urged members of the class of 2009 to pursue public service -- stressing that the best and brightest are needed to tackle local, national and international challenges. "Princeton has uniquely prepared you for such service," Petraeus said. 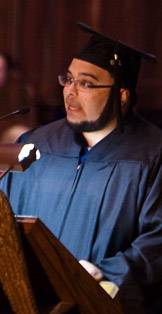 Wasim Shiliwala was one of several seniors who read during the service, which included prayers and readings from various religious and philosophical traditions.

One of the nation's top military leaders challenged Princeton University's graduating seniors May 31 to enter a life of public service, exhorting them to continue what is a proud university tradition and promising them that such a path is a meaningful way to live.

"Be bold and fearless in channeling your energy into the undaunted pursuit of worthwhile work," said U.S. Army Gen. David Petraeus, a Princeton alumnus and commander of the U.S. Central Command, speaking at this year's Baccalaureate ceremony. The event, an interfaith worship service, is one of Princeton's oldest traditions.

Before outlining his case for lives devoted to civic benefit, however, Petraeus warmed the crowd with some lighthearted remarks. From his high perch in the University Chapel pulpit, the former paratrooper wondered about his exit following his address, saying, "I'm glad I'm parachute-qualified." 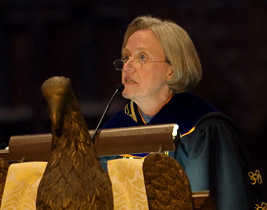 Turning his attention to the students, Petraeus stressed that the problems that beset local, national and international communities call for public servants who are the best and brightest of their generation. "Princeton has uniquely prepared you for such service," Petraeus said. Doing such work, he noted, will "provide you with work worth doing, with unique opportunities for camaraderie and with considerable scope to develop your leadership potential." 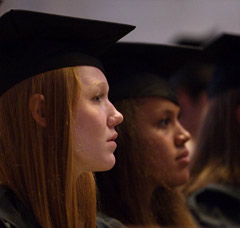 Seniors listened intently during the ceremony, which is one of Princeton's oldest traditions.

He related how he had struggled with the complexities of his courses, particularly a microeconomics course, as a graduate student at Princeton, where he would eventually earn his master's in public affairs and a Ph.D. from the Woodrow Wilson School of Public and International Affairs in 1985 and 1987, respectively. Yet those lessons guided him well during his tours in Iraq when he and his fellow officers realized that nation building, including conveying the democratic principles of a free market, was going to be as important as military prowess in stabilizing the country.

"Your education here has emphasized broad knowledge, critical thinking and the ability to communicate your thoughts coherently," Petraeus told the students, his voice reverberating through the vaulted spaces of the University Chapel. "And the quality and character of such a background are particularly well suited to public service, where the problems are complex and the resources thin. You may be surprised at how the knowledge and skills you have acquired here at Princeton -- whether in the social sciences, the natural sciences or the humanities -- will serve you as you serve others." 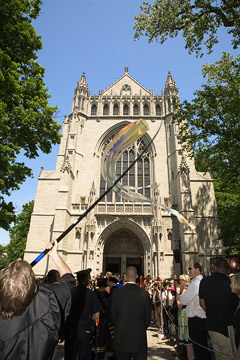 Accompanied by colorful kites, members of the class of 2009 approached the University Chapel for the interfaith worship service.

Petraeus spent 19 months as the top U.S. commander in Iraq before assuming his current duty in October 2008 as leader of the U.S. Central Command, which oversees American forces in East Africa, the Middle East and Central Asia. Previously, he was the first commander of the Multinational Security Transition Command in Iraq and the NATO Training Mission in Iraq. Prior to those assignments, he was the commanding general of the U.S. Army's 101st Airborne Division (Air Assault) in Iraq.

Petraeus commended the graduating students in Princeton's ROTC program, but he also reminded the class that public service can be accomplished through many different kinds of careers and in many different places.

"While the challenges are different, our own neighborhoods and communities also require creative solutions," he said. "Indeed, you can be a servant of the greater good with a private sector career, as well."

He emphasized the importance of academic research and teaching, mentioning, in particular, his adviser and longtime mentor, Richard Ullman, the David K.E. Bruce Professor Emeritus of International Affairs. And he praised the record of Princeton President Shirley M. Tilghman, thanking her for her "magnificent leadership." "You have navigated the always tricky waters that swirl around institutions of higher learning with great skill and a deft, steady hand," he said. 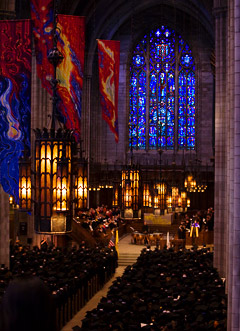 Seniors filled the chapel for the Baccalaureate service, which dates back to 1760, when the graduating class comprised 11 students.

In her introduction of Petraeus, Tilghman extolled his accomplishments, noting that he has been described by many as a "genuine American hero." While stressing that much remains to be accomplished in Iraq, she paid tribute to his leadership in rethinking American military strategy through his principles of counterinsurgency, which are, she said, eliminating "simplistic definitions of victory and defeat in favor of incremental and nuanced progress."

"Public service is really emphasized here at Princeton and it makes sense to address the students here and call them to service," he said. "These really are the leaders of the future." The address reinforced his decision to choose a helping profession, Berry said.

Seniors Lauren Whitehead and Dylan Alban, both majors in Spanish and Portuguese languages and cultures, also agreed with Petraeus' call to action.

"He was inspirational," said Alban, who will be traveling to Indonesia as part of Princeton-in-Asia, an internship program. "It was the right message." 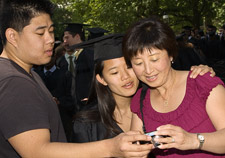 Seniors shared moments of reflection with family members and friends as they awaited the service.

"His words were certainly very apt," agreed Whitehead, who will also participate in the Princeton-in-Asia program, traveling to Thailand next year. "We are so interested in public service and understand its vital role."

The Baccalaureate service was webcast live and will be available for later viewing. End-of-the-year activities will continue with Class Day on Monday, June 1, and Commencement on Tuesday, June 2.

Petraeus engaged with students and family members after the ceremony.