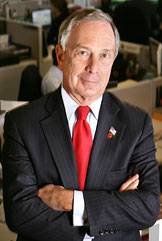 Photo by Spencer Tucker/Office of the Mayor

Michael Bloomberg, the mayor of New York City and a renowned businessman and philanthropist, has been selected as the speaker for Princeton University's 2011 Baccalaureate ceremony.

Baccalaureate, an end-of-year interfaith service that is one of Princeton's oldest traditions, is scheduled for 2 p.m. Sunday, May 29, in the University Chapel.

Princeton President Shirley M. Tilghman selects the Baccalaureate speaker after consultation with senior class leaders. Officers of the class of 2011 recommended Bloomberg based on his prominence in public service, business and philanthropy.

"Mayor Bloomberg's life and career path certainly take after the tradition of Princeton’s unofficial motto: 'In the Nation's Service and in the Service of All Nations,'" said Alex Rosen, president of the senior class. "His range of experiences and expertise in multiple fields fits well with the broad interests of the members of our class. Additionally, Bloomberg himself has a strong connection to the University as the father of a Princeton graduate. For these reasons, I am thankful that our class will have the opportunity to learn from Mayor Bloomberg as we prepare to embark on our lives after Princeton."

One of the nation's most foremost independent political leaders, Bloomberg was elected the 108th mayor of New York City in 2001, 20 years after founding Bloomberg LP, which he built into one of the world's biggest financial information services and media companies. He is now serving his third term as mayor of America's largest city, having been re-elected in 2005 and 2009.

After overseeing information systems at the investment bank Salomon Brothers, Bloomberg founded his own company with a vision of using emerging technology to bring transparency and efficiency to Wall Street's trading firms. New York City-based Bloomberg LP now has 300,000 subscribers to its financial news and information service. The company's media properties span television, radio, digital and print, making Bloomberg one of the world's largest news organizations with more than 2,300 news and multimedia professionals at 146 bureaus in 72 countries.

While building his company, Bloomberg devoted increasing attention to issues such as education, public health, environmental sustainability and New York City civic affairs. He has sat on the boards of several charitable, cultural and educational institutions, including his undergraduate alma mater, Johns Hopkins University, which now houses the Bloomberg School of Public Health. In 2009, the Chronicle of Philanthropy ranked him fourth on its list of the 50 most generous people in America.

At Princeton, a gift from Bloomberg's family funded part of Emma Bloomberg Hall, a dormitory within Butler College, one of the University's six residential colleges. Emma Bloomberg, the mayor's daughter, is a 2001 Princeton graduate.

Princeton's Baccalaureate service focuses on members of the senior class. It includes prayers and readings from various religious and philosophical traditions. The earliest recorded Baccalaureate address -- titled "Religion and the Public Spirit" -- was delivered by University President Samuel Davies in 1760 to the 11 members of the graduating class. Since 1972, the address has been given by a speaker chosen by the president after discussion with class leaders.