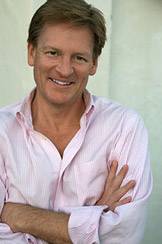 Author and journalist Michael Lewis, a 1982 Princeton graduate whose best-selling books include "Moneyball," "The Blind Side" and "Liar's Poker," has been selected as the speaker for the University's 2012 Baccalaureate ceremony.

Baccalaureate, an end-of-year interfaith service that is one of Princeton's oldest traditions, is scheduled for 2 p.m. Sunday, June 3, in the University Chapel.

Princeton President Shirley M. Tilghman selects the Baccalaureate speaker after consultation with senior class leaders. Officers of the Class of 2012 recommended Lewis based on his understanding of life as a Princeton student and his insights into the transformations that have marked many aspects of American society over the past generation.

"Lewis' writing injects life into people and topics that might otherwise go undiscovered and overlooked," said Lindy Li, president of the senior class. "We are incredibly excited and honored to share with him one of our final moments as Princeton undergraduates."

Lewis earned an A.B. in art and archaeology from Princeton, where his studies focused on art history. After earning a master's degree from the London School of Economics, he went to work for the investment bank Salomon Brothers. That experience spawned his critically acclaimed debut, "Liar's Poker: Rising Through the Wreckage on Wall Street" (1989), which offers an insider's view of practices that would have a profound effect on the world economy.

Among Lewis' other best-selling books are two that recently were made into successful Hollywood films: "Moneyball: The Art of Winning an Unfair Game" (2003), which examines the wave of new statistical analyses that have changed how baseball players are valued; and "The Blind Side: Evolution of a Game" (2006), which recounts the story of an African American youth whose life is transformed and who becomes a football star after he is adopted by a white evangelical Christian family.

Lewis' books also include "The Big Short: Inside the Doomsday Machine" (2010), an account of the current U.S. financial crisis; "The New New Thing" (2000), which focuses on Silicon Valley during the Internet boom; and "Losers: The Road to Everyplace but the White House" (2000), which explores the 1996 presidential campaign.

A contributing editor for Vanity Fair and columnist for Bloomberg View, Lewis writes often for The New York Times Magazine, and his articles have also appeared in The New Yorker, Gourmet, Sports Illustrated, Foreign Affairs and Poetry magazine.